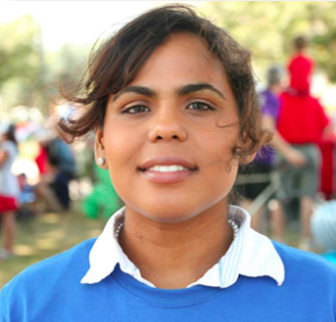 Eva Bermudez Zimmerman, who had a conversation with gubernatorial candidate Ned Lamont about the possibility of becoming the Connecticut Democrats’ first Hispanic statewide nominee as his running mate before he picked Susan Bysiewicz, said Wednesday night she will seek the nomination for lieutenant governor Saturday.

“I am a declared candidate for lieutenant governor,” she said.

The prospect of a floor fight over lieutenant governor at the Democratic convention this weekend, coupled with an unusually public rebuke of Lamont by the chairman of the state’s largest delegation, New Haven, are casting a pall over what once was expected to be a two-day celebration of party unity led by Lamont and U.S. Sen. Chris Murphy.

In different ways, Lamont and Murphy each failed this week to deliver on expectations raised about the Democratic Party breaking racial barriers in 2018, sparking a public revolt over Lamont’s running mate, while exposing the limits of Murphy’s influence over down-ballot races as he approaches his unopposed nomination for a second term Friday.

Murphy, whose spokeswoman declined comment for this story, tried and failed to deliver a 5th Congressional District endorsement this week to Jahana Hayes, an African-American woman who would be the first racial minority nominated by Democrats for a congressional seat in Connecticut, leaving her status uncertain and some activists angry at Murphy’s presumption.

But it was Lamont’s surprise alliance with Bysiewicz, who is dropping out of the governor’s race to run for lieutenant governor, that opened a public debate about the Democratic Party’s commitment to racial diversity, a surprising turn for a party that has included an African American candidate for state treasurer on its ticket in every race since 1962.

Vinnie Mauro, the Democratic chairman of New Haven, said Lamont erred badly in signaling to urban Democrats he would select a running mate who was either black or Hispanic, then cutting a deal to avoid a primary with Bysiewicz, a former secretary of the state.

“There is anger about it, but more importantly there is disappointment,” Mauro said. “I’m Italian. I get mad and then I get over it. People can get over being mad faster than disappointment. I think there will be disappointment at the convention. Does that disappointment carry over all the way until November? Disappointment is far more dangerous to me than anger.” 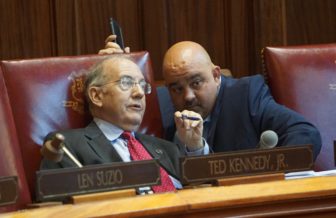 Senate President Pro Tem Martin Looney and his chief of staff, Vinnie Mauro. They are not aligned on Lamont.

Mauro also is chief of staff to Senate President Pro Tem Martin M. Looney, D-New Haven, who endorsed Lamont on Wednesday. Audrey Tyson, who is Mauro’s co-chair on the Democratic Town Committee and a member of the state central committee, is on Lamont’s campaign staff.

An irony of Mauro’s criticism is that he tried and failed, beginning last fall, to recruit black and Hispanic candidates for potential runs of statewide office. But Mauro said Lamont could do something he could not — offer a spot as a running mate.

“I’m just a fat guy from New Haven. I’m not a guy who has run statewide twice and is the presumptive nominee. Him asking and me asking are completely different worlds,” Mauro said.

In an interview early Wednesday afternoon before Mauro’s comments, Lamont said he made a good-faith effort to recruit a running mate who would be a good partner and bring greater diversity to the statewide ticket.

“We got pretty close with several folks,” he said. 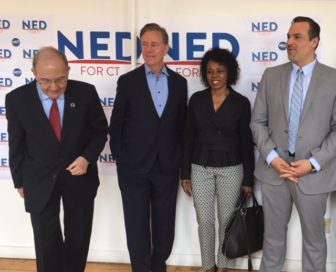 Lamont declined to discuss the effort in detail, other than to confirm he offered the spot to New Haven Mayor Toni Harp, an African-American woman with a deep knowledge of the state budget as the former Senate co-chair of the Appropriations Committee. His campaign confirmed he talked to Zimmerman, a Puerto Rican union organizer raised in Hartford, about becoming his running mate, but no offer was made.

Lamont said he will not try to influence down-ballot races, other than lieutenant governor.

“Susan and I running. We’re a team,” Lamont said. “In terms of the other down-ballot races, I think delegates are very smart. They can sort that out. They can prioritize different things.”

Zimmerman said Lamont never made her an offer, but he asked her to refrain from committing to two other gubernatorial candidates, Bridgeport Mayor Joseph P. Ganim and Jonathan Harris, when they each asked her be their running mate.

Zimmerman, 30, who lives in Newtown with her husband, Stacey Zimmerman, another labor activist, lost a race for state representative in 2016.

She opened an exploratory campaign for statewide office in February, weighing a run for secretary of the state. Zimmerman shifted her focus to lieutenant governor rather than attempt a challenge to Secretary of the State Denise Merrill, a Democrat seeking her third term. Her exploratory committee reported raising $15,904 by the end of March, the most recent reporting period.

Ganim said he is backing Zimmerman for lieutenant governor and believes she will get significant support in Bridgeport’s delegation, the largest after New Haven’s.

“My impression is she’ll get 15 percent,” he said, referring to the threshold for qualifying for a primary. “I think Bridgeport will back her. We want a ticket that’s diverse, as diverse as we can get.”

Ganim, whose criminal conviction stemming from a kickback scheme during his first tenure as mayor has been an obstacle to winning delegate support, is petitioning for a place in the primary. He said his campaign has collected about 9,000 signatures. He needs 15,458 signatures — 2 percent of all registered Democrats — by 4 p.m. on June 12. 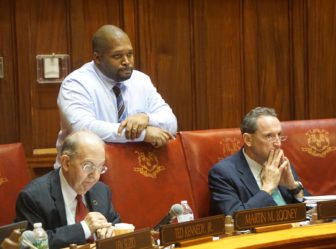 Sen. Gary Winfield, D-New Haven, who considered a run for lieutenant governor last year before his wife got pregnant with twins, said he was unlikely to seek the nomination Saturday, citing parental responsibilities. He also questioned the wisdom of fighting to become an unwelcome running mate.

“Is it worth it to go through all of this to be with someone who not expressed an interest in me being on that ticket?” Winfield said.

Murphy was among the Democratic leaders who have quietly rallied around Lamont, though sources say he opposed the choice of Bysiewicz for lieutenant governor. She was his opponent in an ugly primary for U.S. Senate in 2012.

In the 5th District, Murphy encouraged Hayes, a former national teacher of the year, to run after U.S. Rep. Elizabeth Esty ended her re-election campaign after admitting to mishandling a harassment complaint against her former chief of staff.

Hayes lost the endorsement to Mary Glassman, a former first selectman of Simsbury who was the party’s nominee for lieutenant governor in 2006, on a series of late vote switches after it had appeared Hayes was going to be the winner.  Zimmerman, a delegate from Newtown, said she thought she was about to see history.

Without the endorsement, it is unclear if Hayes, a political newcomer, still can count on Murphy’s fundraising support to wage a primary.