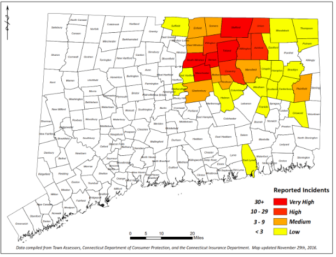 A map showing the where most of the crumbling foundations are.

Washington — U.S. Department of Housing and Urban Development Secretary Ben Carson  has accepted an invitation from Sen. Chris Murphy to come to Connecticut and take a first-hand look at the damage to homes that have crumbling foundations made of  tainted concrete.

On Monday, Carson plans to visit the Willington home of Maggie and Vincent Perracchio, which has severe cracks in the foundation. Sen. Richard Blumenthal and U.S. Rep. Joe Courtney, D-2nd District, also plan to be there.

About three dozen towns in north-central and northeastern Connecticut have foundations built with concrete containing pyrrhotite from a quarry in Willington. Pyrrhotite is a mineral that expands with moisture and causes foundations to bow and crack.

Murphy and  Blumenthal have co-sponsored two bills to help the hundreds of homeowners with crumbling foundations and hope for Trump administration support for their legislation.

The Aid to Homeowners with Crumbling Foundations Act introduced by Murphy and co-sponsored by Blumenthal would provide up to $100 million over five years from the HUD to states like Connecticut that have created programs  to help damage to residential structures built with concrete containing pyrrhotite. 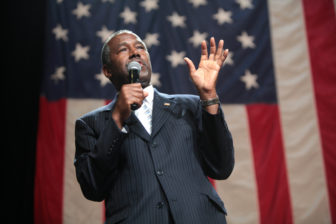 by Blumenthal and co-sponsored by Murphy, would create a new $100 million grant program within the Federal Emergency Management Agency, an agency that has rebuffed Gov. Dannel Malloy’s requests for help for affected homeowners.

If the legislation is approved, qualified homeowners would apply to FEMA directly for a grant.

Murphy invited Carson to witness the damage pyrrhotite-tainted concrete has wrought in the state and asked for HUD’s help during a Senate hearing in April.

“It’s a very valid issue and yes, we would be very happy to work with you on that,” Carson said.