SEEC to Boughton, Herbst & Obsitnik: Come back next week 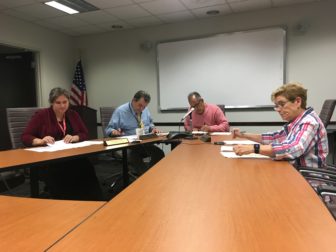 The three gubernatorial candidates seeking public financing failed to win approval of their grants Wednesday by the State Elections Enforcement Commission, the result of deficiencies in their applications for $1.35 million each to wage a primary.

Mark Boughton, Tim Herbst and Steve Obsitnik, who all are competing for the Republican nomination in an August primary, will have another chance to qualify next week.

Michael Brandi, executive director of the commission, said the agency has been overwhelmed by applications from candidates for all legislative and statewide constitutional offices while working with its lowest staffing level since the creation of the Citizens’ Election Program. Brandi partially attributed the uptick to a change in the program that decreases the amount of grant money candidates will receive if they submit applications after August 27.

“We’re looking at 3,000 plus contribution cards for each gubernatorial … and again, I’ve said it repeatedly—we’re not an ATM, this is a clean elections program, every single contribution that comes in has to be properly vetted to make sure it complies with the law,” Brandi said.

To qualify for public financing in the voluntary program, a candidate for governor must be on the ballot and primary and raise $250,000 in contributions of between $5 and $100. The winner of the primary, if they are a participating candidate, will get a grant of $6.5 million.

Brandi said the three candidates need to make fixes in their applications before being approved. Those fixes come from problems with contribution cards, including address and employment issues or missing information, he said.

Boughton, the GOP’s convention-endorsed candidate, struggled in his two previous campaigns to raise the necessary contributions to qualify.

The Citizens’ Election Program has partially bankrolled campaigns since 2005—when it was attached to a reform law in response to the corruption scandal that forced the resignation of Gov. John G. Rowland. It banned contributions from lobbyists and state contractors and, in the case of legislative races, restricted political action committees.

Officials estimate the public financing will cost the state around $33 million this year, and anticipates seeing upward of 300 grants. The SEEC has approved 48 grants so far, Brandi said.

None of the Democratic candidates for governor are seeking public financing. Ned Lamont, the convention-endorsed Democratic candidate, is self-funding his campaign as he did in a previous run for governor in 2010. Bridgeport Mayor Joseph P. Ganim, who served seven years in prison for corruption during his first tenure as the city’s leader, is disqualified from seeking public financing.

The SEEC will be announcing any new qualifiers at it’s regular meeting next Wednesday morning, Brandi said.

“At this point part of it is up to when not only fixes arrive, but when our staff can get through them, we’re just monitoring the situation and trying to get these through the process as quickly as we can,” Brandi said.