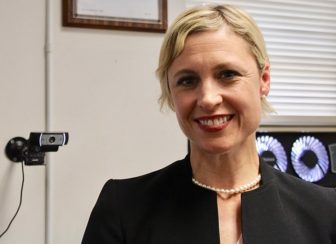 Don’t look for Susan Hatfield to sign onto letters attacking Donald Trump if she becomes Connecticut’s next attorney general, even when some of her fellow Republicans criticize him for separating parents and children at the border.

Connecticut’s current attorney general, George Jepsen, joined 20 fellow Democratic AGs across the country Tuesday in signing a letter protesting Trump’s new policy of separating parents from children at the border if the families have been caught entering the country illegally. The letter  called the policy “inhumane,” saying it raises serious concerns regarding the violation of children’s rights, constitutional principles of due process and equal protection, and the efforts of state law enforcement officials to stop crime.”

Meanwhile, Hatfield, a Republican campaigning to succeed Jepsen (who’s retiring), said Tuesday she stands by the president’s policy, though she vowed to push for a more comprehensive solution to the country’s immigration challenges, including a faster “path to citizenship” for immigrants seeking to follow the legal process. She also said “more discussion” is needed about how the system handles children.

“Who doesn’t have their heart break when they hear stories” of parents and children being separated? Hatfield said during an appearance on WNHH FM’s “Dateline New Haven” program. “The flip side of it is the policy: We want to maintain the law.”

The state Republican Party endorsed Hatfield, a 46-year-old state prosecutor (on leave for the campaign) from Pomfret, at a convention last month for the attorney general slot. She now faces former State Rep. John Shaban of Redding in an Aug. 14 party primary. If she wins in November, Hatfield would become the first Republican to hold the office since John J. Bracken left office in 1959 and the first woman ever elected Connecticut’s attorney general. (Clarine Nardi Riddle finished out Joe Lieberman’s final term from 1989-1991 when he became a U.S. senator.)

The Democrats, meanwhile, have their own three-way primary for the job on Aug. 14 — and their candidates have been competing over who will take the strongest stand to fight Trump administration policies by championing sanctuary cities and gun control and suing companies that rip off the public.

Unlike the Democratic candidates, she opposes banning “ghost guns” or enacting any other gun-control laws. A self-professed Second Amendment supporter, she said Connecticut, which has the nation’s toughest gun-control laws, doesn’t need any more. She said she’d focus instead on mental health and on bullying, which can lead in the long term to more violence in society.

She cited as an example of bullying a tweet that a top gubernatorial aide, Michael Lawlor, sent out about her candidacy, calling her the state’s “first full-force racist enabler candidate.”

(Lawlor declined comment Tuesday. Instead, gubernatorial spokesperson Kelly Donnelly responded: “It’s impossible to give an ounce of credibility to Ms. Hatfield on the subject of bullying when she has failed to condemn any of the hateful, abusive rhetoric of President Trump or to repudiate the lifelong trauma inflicted on children who are being snatched from their parents at the border.”)

If elected, Hatfield said, she intends to end the “[Richard] Blumenthal era” of charging too hard against corporations rather than choosing more selectively when to file lawsuits, in cases of clear malfeasance. She said the Democratic-led attorney general’s office for years has created a “business-unfriendly environment” in Connecticut.

In the interview, Hatfield focused not on Trump but on her own story. Besides working as a state prosecutor Hatfield used to do shifts as a nurse in Yale-New Haven Hospital’s mental health ward. She said the two jobs taught her a lot about drug addiction and inspire her to use the attorney general position to help tackle the opioid crisis through public advocacy and coordination with other state agencies.

A star guard (with a state record for three-pointers) at Griswold High School, Hatfield was later inspired in politics by former U.S. House Speaker Newt Gingrich, for whom she worked as a staffer and who has endorsed her campaign. She said in the WNHH interview that Gingrich showed her how to be a leader in the “way he ran his office. He treated his people fairly. People would go to the end of the earth to finish a project for him, to implement his policies because they respected him. He taught everybody to think for themselves whatever he believed the outcome should be, to defend our positions. His philosophy was government doesn’t need to regulate everything.”

Hatfield said she learned firsthand why an attorney general needs to take a strong stand against sexual discrimination. She said she faced it in the eighth month of her pregnancy when her supervisor grilled her about her “plans” and then started harassing her about … her penmanship, and clutter in her office.

She asked to be moved to another office, to no avail. Finally, with the help of attorney Norm Pattis, she sued the state. The case ended up in court; finally, she reached a settlement with the attorney general’s office (who represented the state) and moved to a different office.

The attorney general’s office should not fight women in such cases, Hatfield argued.

Perhaps the clearest distinction between Hatfield and the Democratic pack lies in the immigration issue, including the new Trump policy on separating families.

A transcript follows of the portion of the interview covering that subject:

Hatfield: As a Republican, we are the party of inclusion. I support legal immigration. Sanctuary cities, I oppose. A lot of people that are here in our country and our state are first-generation. What they say is, “We stood in line. We did everything that was appropriate…

What about the separation right now at the border with the families? Republicans are divided.

Democrats are not divided about whether you should be removing kids from parents at the border.

This is an unfortunate situation we have going on from a human standpoint. I mean, who doesn’t have their heart break when they hear of stories like that? As a person.

I think all sides agree there needs to be a broader solution to the problem. In the meantime, do you support the president’s policy of separating parents from their children?

A former nurse that I worked with she had an interesting story. A person that works with her husband has been trying to leagllay become a United States citizen and hasn’t been able to. That’s frustrating. People are trying to do the right thing.

You’re talking about solving the root of the problem. I’m asking about the short term. This has bedeviled George W. Bush. It bedeviled Barack Obama.  Trump has taken it to a new direction. Do you support what he is doing now in the short term before the big problem is fixed …

I’m going to work to a reasonable end solution to this. But at this point in time, having heard from many people across the state, they don’t support sanctuary cities. There needs to be law.

I’m talking specifically about separating parents from children. That’s the issue of the day.

Right. That’s the issue of the day. I support the president’s agenda.

Everybody agrees there needs to be broader solutions that can be bipartisan. In the short term … A lot of Republicans feel it’s wrong to be separating the kids. They feel that’s cruel. But your sense is they’re breaking the law …

We need more discussion about the children. As a mom of two young boys, William and Daniel, ages 6 and 10, there should never be a bright line rule as to anything that impacts the children. So we do need more discussion about things. I don’t paint a broad brush about what we would do in every single situation. The Democrats want to just paint the Republicans as separators of children. We’re human. I’m human. I’m a mom. At the end of the day, I want to do the right thing.