Rep. Vincent Candelora, R-North Branford, talks with reporters Thursday outside the Secretary of the State’s Office

Minority Republicans in the House of Representatives are trying to petition the legislature into special session to block a planned study of electronic tolling — a move that may have greater implications for the fall election season than for the tolls analysis.

It would take signatures from a majority of both chambers to call the legislature into special session, which means 76 from the House and 24 from the Senate.

And even if that threshold is achieved, that wouldn’t mean the legislature would necessarily vote on blocking the tolls study. Two Democrats, House Speaker Joe Aresimowicz of Berlin and Senate President Pro Tem Martin M. Looney of New Haven, share exclusive, joint control over the ability to place emergency certified bills on the legislature’s agenda.

Aresimowicz, who has said he believes Connecticut cannot finance a major rebuilding of its aging, overcrowded transportation infrastructure without tolls, didn’t seem inclined to cooperate with the House GOP effort. 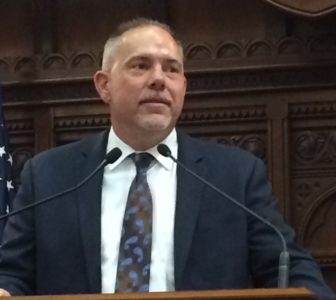 “This is the type of political grandstanding that has gotten our state in trouble over the years,” the speaker said Thursday. “If the minority leader would like to have an honest debate on how we can fix our failing roads and bridges without putting it solely on Connecticut taxpayers, I’ll work to call us in tomorrow.”

Looney also appeared disinterested in a special session. The governor has said it will take transportation officials about nine months to solicit and select a consultant to perform the study, meaning the work most likely won’t begin until the after Malloy’s successor takes office in January. This would give the next governor and legislature ample time to cancel the project if they wish.

“The lead time and build-up to this this study will be substantial and will provide ample time for the 2019 General Assembly — in consultation with the new governor — to pursue the merits of the new study,” Looney said. “We cannot deny the reality that substantial new investment in transportation infrastructure must be dealt with forthrightly and not with unrealistic plans that, in effect, would make it impossible for the state to provide critical funds for schools, municipalities, nonprofits and other valid essential services.”

Still, House Republicans said they felt it was crucial to begin putting pressure on the legislature to counter steps taken Wednesday by Gov. Dannel P. Malloy and the State Bond Commission.

The commission approved Malloy’s request for $10 million in financing for an analysis of establishing electronic tolling on most Connecticut highways.

The governor is not seeking re-election this fall. And with a little more than five months left in his term, critics say the tolls issue should be resolved by Malloy’s successor and by the 2019 General Assembly.

“This year the legislature clearly did not expend any money for the purposes of a toll study,” Candelora said. “What the governor is attempting to do now is just circumvent the budget process.”

Malloy spokesman Chris McClure said “These repeated attempts to prevent the state from studying the future of transportation funding make it clear Connecticut Republicans simply do not care our state’s economic future — but only care about political stunts to help them in November. Our state must move forward to be competitive and there is no reasonable or rational person who believes we will be successful relying on gasoline taxes alone. Nevertheless, there is a biting hypocrisy in Republicans protesting a perceived waste of taxpayer dollars on a study by insisting on holding a costly symbolic special session that will accomplish nothing.”

Republicans control 71 out of 151 seats in the House. Candelora said the five GOP representatives who have not signed the petition yet are on vacation, but already have indicated their willingness to do so upon their return.

Once some petition signatures have been submitted, legislators seeking to force a special session have 30 days to secure all the signatures necessary — or else they must begin the process all over.

Democrats in the House and Senate as well as Senate Republicans have not announced any petition efforts to date.

Spokespeople for the Senate caucuses did not comment immediately after the House GOP petition drive announcement.

Candelora said House Republicans are hopeful other caucuses will participate in the petition effort.

I would hope there would be some Democrats willing to come forward to have this conversation,” he said.

Candelora acknowledged that legislators who don’t sign the petition to force a special session could face repercussions on the campaign trail.

“There hopefully are some fiscally prudent Democrats who realize this is a waste of money,” he said.