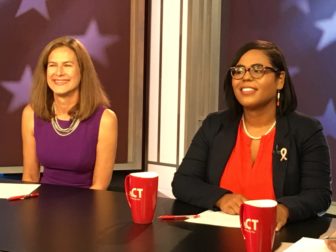 The Democratic candidates for lieutenant governor, Susan Bysiewicz and Eva Bermudez Zimmerman, sparred over taxes, experience and Connecticut’s massive pension debt Thursday during their only debate, a live-streamed forum at NBC Connecticut in West Hartford.

Bysiewicz, 56, a three-term legislator and three-term secretary of the state, repeatedly cited her track record; while Zimmerman, 31, a staffer with the Service Employees International Union, portrayed her opponent as a career politician.

“Susan has the wrong kind of experience,” Zimmerman said, charging Bysiewicz with voting to reduce and defer state contributions to public-sector pension funds while serving in the House between 1993 and 1998. “We can’t send someone back to Hartford who is responsible for creating the mess we are in and trust that you will fix it.”

As the result of years of under-funding, Connecticut now has one of the largest state pension debts, per capita, in the nation, and the cost of catching up on that burden is expected to place huge pressure on state finances over the next 15 years.

Zimmerman added that Connecticut needs “leaders that are not cowards and are ready to make sure we keep our financial promises.”

Bysiewicz countered that as a legislator she battled insurance companies to end drive-through mastectomies and worked as secretary of the state to secure campaign finance reform and build a “hack-proof” voting system. “I have a very strong record of leadership,” she added. “We need leaders who are consensus builders. I’m not seeing a record of accomplishment that my opponent brings to this race.”

Bysiewicz said she has the experience to handle all of the lieutenant governor’s duties — to preside over the Senate, to support the governor and to step in and fill that office if necessary.

I’m not seeing a record of accomplishment that my opponent brings to this race.”
Susan Bysiewicz

“I’m ready to go on Day One,” she said, noting that Greenwich businessman Ned Lamont, who won the Democratic State Convention endorsement for governor, selected her as his running mate.  “He needs an equal partner to help him address budget challenges, unfunded liabilities, [and] getting the economy going.”

Those budget challenges include nonpartisan analysts’ projections that state finances, unless adjusted, will run deep in the red after the election. Analysts project deficits topping $2 billion or 10 percent next fiscal year, and almost $2.6 billion or 13 percent in 2020-21.

Zimmerman said Connecticut cannot solve this problem without more revenue, and should focus on a more progressive tax system that would provide funding for key priorities like health care, education and municipal aid while also easing pressure on middle-income households. She said Connecticut should raise taxes on major corporations.

Though she hasn’t won an election, Zimmerman said that through her work with the SEIU, she has lobbied for health care, education and other priorities of working families.

“I represent people every single day,” she said, “having those conversations that change the status of Connecticut.”

Bysiewicz said her focus on state government’s fiscal woes would be on streamlining spending and boosting revenues by promoting economic growth.

The former legislator said Connecticut could save hundreds of millions of dollars by helping more elderly receive care at home rather than in nursing facilities, reforming contracting bidding processes and cutting prison costs through anti-recidivism programs.

While Susan was looking for elected office, I was there on the ground trying to keep Husky A alive, trying to get more people enrolled in the Affordable Care Act.
Eva Bermudez Zimmerman

Bysiewicz said both as secretary of the state and in her private-sector work assisting small businesses she has helped companies grow jobs, adding that state government must provide more assistance to small businesses.

But while Bysiewicz said she believes the first post-election deficit could be solved “without raising taxes,” she did suggest a major tax hike later in the debate. Specifically she said Connecticut could raise about $500 million per year by closing the “carried interest loophole.”

This is a reference to a provision in the federal income tax system that allows hedge fund managers to pay a 20 percent capital gains rate on their income rather than the top marginal rate for earnings in the federal system, which is 39.6 percent.

Labor advocates and other progressives have suggested that Connecticut respond to the “carried interest” loophole by levying some type of capital gains surcharge within the state income tax system.

Bysiewicz also said she would give municipalities new authority to raise revenue, including a hotel tax and a sales tax surcharge. Zimmerman said Connecticut should focus, rather, on protecting Education Cost Sharing grants to local school districts from cuts.

Over the past year Bysiewicz has explored possible campaigns for the state Senate and for governor before settling on lieutenant governor.

“While Susan was looking for elected office,” Zimmerman said, “I was there on the ground trying to keep Husky A [health coverage for the poor] alive, trying to get more people enrolled in the Affordable Care Act,” Zimmerman said. “It’s time for a different kind of candidate.”

Bysiewicz responded that her exploratory efforts gave her the opportunity to meet the people of Connecticut. “I listened to thousands of voters and had the opportunity to listen to their hopes and dreams and aspirations for our state. … I think that’s why Ned Lamont chose me. Primaries are about finding the best candidates and the people who can win.”

When asked whether she would support Bridgeport Mayor Joe Ganim for governor if Ganim wins the Democratic primary contest with Lamont, Bysiewicz said only that she and Lamont “feel very confident that we are going to win.”

Zimmerman said she could run alongside Lamont or Ganim on the Democratic ticket. “My promise is to the people,” she added.

The two candidates did find common ground in a few areas.

Both said they support legalization of marijuana for recreational use, and also agreed the state should promote greater regionalization of municipal programs to reduce costs.