Blumenthal, other Dems, reject scheduling of Friday vote on Kavanaugh

Washington – Senate Judiciary Committee Republicans have scheduled a vote on Supreme Court candidate Brett Kavanaugh for Friday morning, just one day after he and sexual assault accuser Christine Blasey Ford are due to testify before the lawmakers.

The scheduling of the vote provoked Democrats on the panel, including Sen. Richard Blumenthal, D-Conn., to accuse Republicans of a rush to judgment and of pressing for Kavanaugh’s confirmation with little regard to the allegations against him.

“Scheduling a vote even before hearing Dr. Blasey Ford’s testimony, Senate Republicans have demonstrated the disrespect and disregard that all too frequently shames and silences survivors from ever coming forward,” Blumenthal said in a statement. “The message is clear: serious, credible allegations of sexual assault matter very little to my Republican colleagues when putting extremist ideologues on the federal bench.”

Judiciary Committee Chairman Charles Grassely, R-Iowa, said Republicans on the panel were merely scheduling a business meeting for Friday morning so they could vote on the nomination if needed. Senate rules require three days of notice to schedule such a meeting. 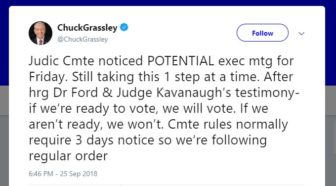 At a house party when they were both teens, Ford accused Kavanaugh of dragging her into a bedroom, pushing her on the bed, trying to take off her clothes and groping her and putting his hand over her mouth when she tried to scream.

A second woman, Connecticut native Deborah Ramirez, has also accused Kavanaugh of sexual misconduct, saying he exposed himself to her at a dorm party at Yale University when they were both freshmen.

Kavanaugh has repeatedly denied the allegations.

Ramirez will not be a witness at the hearing the Judiciary Committee has scheduled for Thursday on Ford’s allegations. Only Kavanaugh and Ford will testify.

Partisan tensions increased Wednesday over the hearing as Democrats objected to the hiring of a female sex crimes prosecutor to conduct much of the questioning for the committee’s 11 male Republican senators.

Also on  Tuesday Trump dismissed Ramirez’s story of Kavanaugh’s drunken behavior at Yale as “a con.”

“The second accuser has nothing,” Trump said of Ramirez. ”She admits that she was drunk. She admits time lapses.”

Eleven Republicans and 10 Democrats will vote on the nomination if the Judiciary Committee takes up the matter Friday. A successful vote is not necessary to advance Kavanaugh’s nomination to the full Senate.

Supreme Court Justice Clarence Thomas received no recommendation from the Judiciary Committee in 1991, but was still confirmed by the Senate. Conversely, Robert Bork was rejected by the committee in 1987 – and by the full Senate.

Senate Republican leaders said they hope to have a vote on Kavanaugh’s nomination in the full Senate next week.