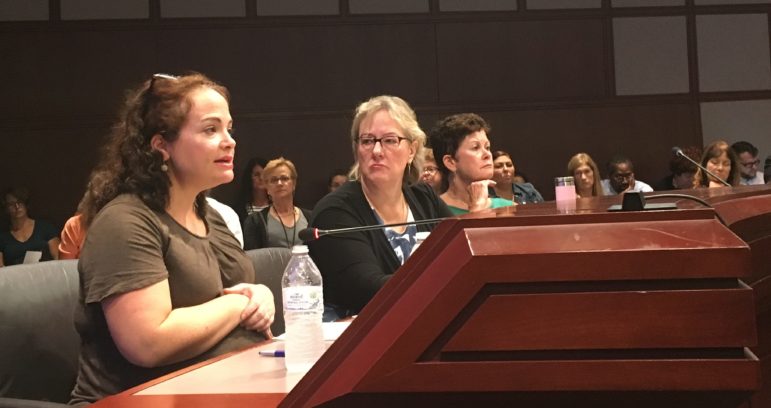 Testifying at the state Capitol complex Wednesday about a spate of suicide attempts at the state’s psychiatric facility for children undisclosed to lawmakers or the public, the commissioner of the Department of Children and Families held up her right hand and promised to start publicly acknowledging problems.

“I do. I do,” DCF Commissioner Joette Katz told concerned legislators during a nearly five-hour hearing on the conditions at Albert J. Solnit Children’s Center in Middletown.

The hearing followed a new critical report by the state Office of the Child Advocate about the systemic problems at Solnit and circumstances surrounding the June suicide of one of its residents, Destiny, who was 16-years-old and eight months pregnant when she hanged herself in her room.

The child advocate’s investigation found that six other youth attempted to commit suicide in the seven months leading up to Destiny’s suicide. Another resident at Solnit attempted suicide the month after Destiny died. While the advocate is notified of the individual suicide attempts, her office never was notified of the several outside reviews done by the Department of Public Health that found that children living at the facility were in “immediate jeopardy.”

Legislators from both sides of the aisle began the hearing by stating the need for legislative action.

State Sen. Len Suzio, the Republican co-chairman of the Children’s Committee, said he hoped the hearing would go beyond an inquiry and informational session on the issues raised.

“It will be something that will lead to legislative action next year because it’s very apparent from the child advocate’s report that I think some legislative response is warranted regarding the issues that she raised,” Suzio said.

Child Advocate Sarah Eagan said the lack of a system to share information about problems at state-run facilities remains her most serious concern.

“To me, it all comes down to how we review facilities, who reviews them, what are the outcome measures, and what do people get to know,” Eagan said.

But Katz’s pledge was far from a blanket promise. Instead, Katz agreed only to informing the families of the youth living at Solnit if there is an outside determination of a systemic safety concern. That notification would include a response from DCF to the finding, and any efforts undertaken by the agency to improve safety.

“I want a quality assurance, quality improvement system so that we can really assess ourselves – every day in every possible way. My hesitancy is because there are some requirements and we are dealing with an older facility,” she explained.

Katz said that disclosing lack of compliance with facility requirements could force the agency to spend money in areas that are not a priority for the agency. “It’s not really where I would want to put my $20 million,” she said, citing a random example.

“… The long and the short of it is we monitor every program we license and we do it quite strictly,” she said. “Now do we publicly share everything we do on any given day? There’s a balance. If somebody calls and asks, yes absolutely.”

But, she added, disclosure can cause problems.

“There is a tension between being responsive and broadcasting something when you are dealing with a population that really does need deep-end services and you want to encourage them,” she said. “I don’t want to be advertising things and then discourage the very people that need our services from coming to our door. So if asked, absolutely we share.”

That’s not good enough for Eagan, whose report disclosed that numerous reports of “immediate jeopardy” to the safety of youth living at Solnit were not shared with parents, legislators, or the general public.

“I can’t tell you how many times a mom calls me to ask if some place is safe,” the state watchdog told legislators. “I don’t know what to tell them.”

Data reported by the agency is system-wide and not facility specific, which makes it useless to parents who have children receiving care in the DCF system.  Eagan said that while parents can access other kinds of data,  such as performance data for schools or whether a day care is licensed, there is little available for the most vulnerable youth, like those in foster care or those with mental health needs.

“The further you get in the system, the harder it is to find out anything,” she said.

In addition to DCF’s promise that it will begin sharing the findings of outside reviews with parents, the Department of Public Health also announced it will post violations and corrective action plans on the more than 2,000 facilities it is responsible for licensing.

The agency plans to begin posting the information on its website in December or January.