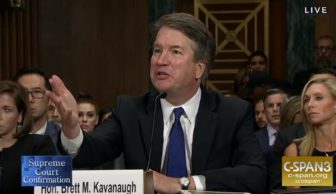 Washington – Sen. Richard Blumenthal said he tried to help a Yale classmate of Supreme Court nominee Brett Kavanaugh send the FBI emails that she says show that the judge’s team was trying to discredit the story of Deborah Ramirez, who has accused the judge of exposing himself to her at a party.

Kerry Berchem, a corporate attorney who lives in Fairfield, was at Yale University with both Kavanaugh and Ramirez.

According to NBC News, Bercham tried to notify the Senate Judiciary Committee of a summary of texts between her and fellow classmate Karen Yarasavage, who included screen shots of the text messages she received from Kavanaugh and his legal team in emails to Berchem.

In one text message, Yarasavage said, Kavanaugh asked her to go on the record in his defense. Two other messages show communication between Kavanaugh’s team and former Yale classmates in advance of a New Yorker story that made Ramirez’s allegations public.

The texts also show that Ramirez was uncomfortable around Kavanaugh when they saw each other at a wedding 10 years after they graduated.

At a hearing on the allegations of sexual misconduct last week, Kavanaugh said he first heard of Ramirez’s accusation when the New Yorker published its story on Sept. 23.

Blumenthal said he tried to help Berchem, who is a constituent.

“We heard from Kerry late on Thursday and submitted her summary to the Judiciary Committee early Friday,” said Maria McElwain, a spokeswoman for Blumenthal in a statement. “After we were made to jump through several hoops that delayed our moving forward, it became clear that the majority Committee staff had not turned this summary over to the FBI and, in fact, had no intention of turning it over to the FBI. With our assistance, Kerry submitted her summary to the FBI herself.”

When reached Monday night, Blumenthal said, “We have provided them to the appropriate authority for a decision on whether they should be investigated.”

Berchem said she has not been contacted by the FBI.

Taylor Foy, a spokesman for the Republicans on the Senate Judiciary Committee, said that shortly before a meeting of the committee on Friday to advance Kavanaugh’s nomination, Blumenthal’s office forwarded 10 emails to Chairman Charles Grassley’s office that were “originally from Ms. Berchem.”

“They were immediately passed to Chairman Grassley’s oversight and investigations team for review,” Foy said. “Committee investigators advised Senator Blumenthal’s staff that they could contact the FBI with the information if they so choose. Whether Blumenthal’s staff chose to do that was up to them.”

Foy also said “the texts from Ms. Berchem do not appear relevant or contradictory to Judge Kavanaugh’s testimony.”

“This appears to be another last-ditch effort to derail the nomination with baseless innuendo by Democrats who have already decided to vote no,” he said.

Ramirez says a drunken Kavanaugh exposed himself to her at a dorm party when they were both freshmen at Yale. She said she initially had some trouble remembering the details of the encounter because she was drunk herself.

Berchem did not respond to a requests for additional information.

But in a statement to NBC News, she said  “I understand that President Trump and the U.S. Senate have ordered an FBI investigation into certain allegations of sexual misconduct by the nominee Brett Kavanaugh. I have no direct or indirect knowledge about any of the allegations against him. However, I am in receipt of text messages from a mutual friend of both Debbie and mine that raise questions related to the allegations. I have not drawn any conclusions as to what the texts may mean or may not mean but I do believe they merit investigation by the FBI and the Senate.”