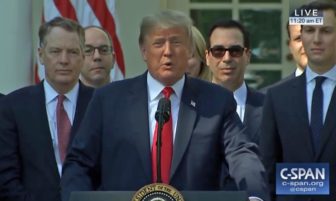 Blumenthal was one of the most vocal critics over the weekend of what Democrats say is the White House’s attempts to limit the FBI probe so that it does not turn up any damaging information about the nominee.

He and seven other Democratic senators have called for the FBI to interview 23 people as part of its investigation into allegations made by Christine Blasey Ford that Kavanaugh sexually assaulted her at a party when they were both in high school.

“Over the weekend, very alarmingly, we began to learn of limits placed by the White House on this investigation. In effect, the White House seems to be micromanaging and straight jacketing an investigation that must uncover the facts and evidence necessary to determine whether Brett Kavanaugh is qualified to sit on the highest court of the land,” Blumenthal said at a press conference in Hartford Monday morning.

In a Rose Garden address to the nation on Monday to celebrate the negotiation of a new trade pact with Canada, Trump lashed out at several Democrats who have been forceful in their opposition of Kavanaugh, including Blumenthal.

Trump said Blumenthal has no right to be criticizing Kavanaugh because he misled the public years ago about his service in the Vietnam War.

“For 15 years he said he was a war hero. He never went to Vietnam,” the president said. “I don’t mean a little bit,’’ Trump said. “This guy lied and now he’s up there talking like he’s holier than thou.”

Trump has brought up Blumenthal’s service during the Vietnam War several times, including this weekend in an angry tweet that said the senator “must talk about his fraudulent service in Vietnam, where for 12 years he told the people of Connecticut, as their Attorney General, that he was a great Marine War Hero. Talked about his many battles of near death, but was never in Vietnam. Total Phony!”

On at least a half-dozen occasions, Blumenthal falsely referred to service in Vietnam, commenting on how veterans like himself were treated upon their return to the United States. Blumenthal served stateside in the Marine Reserves during the Vietnam War.

Blumenthal, however, never “talked about his many battles of near death.”

Meanwhile, Trump received multiple deferments to get out of combat service himself, most famously for bone spurs in his foot. 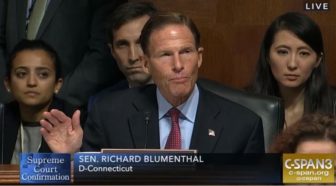 Trump’s latest attacks on Blumenthal’s military service comes after a federal judge on Friday issued a favorable ruling on a lawsuit led by the senator that sues the president for failing to inform Congress of the benefits he is receiving from foreign governments.

During the same Rose Garden address, Trump said the FBI should “interview anybody” as part of its investigation into the allegations against Kavanaugh, but quickly qualified his statement by adding, “within reason.”

Trump also said the White House has told the FBI to conduct its investigation “within the bounds of what the Senate wants,” and to wrap it up quickly.

Speaking in South Carolina on Monday, Sen.  Lindsey Graham, R-S.C., listed the people who he says the FBI will be interviewing as part of its investigation.

The four people Graham listed were Patrick “PJ” Smyth, Leland Kaiser and Mark Judge, –all  high school friends of Kavanaugh–  and Deborah Ramirez, a Shelton, Conn. native who said Kavanaugh exposed himself to her during a dorm party when they were both freshmen at Yale University.

But there is at least one other person the FBI may interview. That’s Chad Ludington, a Yale classmate who in a statement to the FBI has accused Kavanaugh of being untruthful in his testimony to the Senate Judiciary Committee and of making a “blatant mischaracterization” of his drinking while in college

The White House told the FBI to reopen its background investigation after Sen. Jeff Flake, R-Ariz., and other Republican senators indicated they were uneasy about voting for Kavanaugh’s confirmation before there’s a new probe.

Trump also lashed out Monday at Senate Judiciary ranking member Dianne Feinstein, accusing the California Democrat of leaking a confidential letter from Ford, although media outlets like The Intercept have said neither she nor her staff were their source.

Blumenthal, Feinstein, and most other members of the Senate Judiciary Committee on Monday wrote White House Counsel Don McGahn and FBI Director Christopher Wray with their demand that 23 individuals, at a minimum, be interviewed as part of the agency’s expanded background check of Kavanaugh.

There were others on the Democrats’ list as well, including Kavanaugh.

Blumenthal said there should be no confirmation vote on Kavanaugh before all 23 individuals are interviewed — and possibly others as well.

“These individuals have relevant knowledge to corroborate the credible allegations made by these survivors,” he said. “They must be interviewed and any other leads must be followed coming from those interviews.”

A Quinnipiac poll released Monday shows that support for Kavanaugh, especially among women, has fallen.

The poll, taken after the riveting Senate Judiciary Committee hearing on Ford’s allegations last week, found that 48 percent of American voters say the U.S. Senate should not confirm Kavanaugh to the U.S. Supreme Court, while 42 percent say Kavanaugh should be confirmed.