Creating the Board of Regents? Brilliant or a blunder, depending who you ask 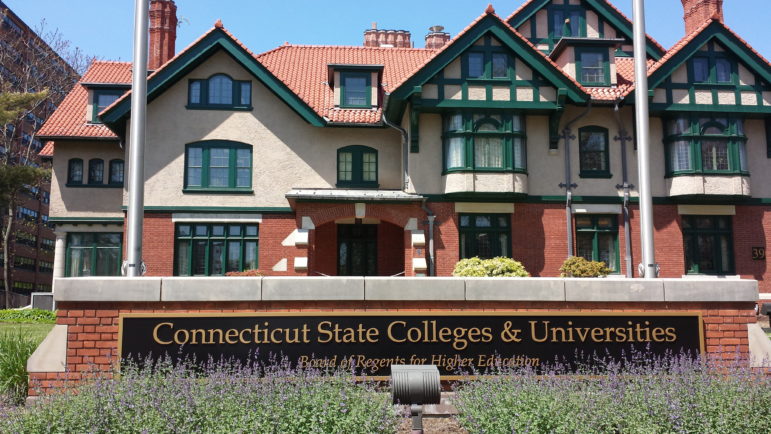 Many promises were made by the freshman governor: tens of millions would be saved, more professors hired, and transferring between schools would be seamless.

“This won’t be easy,” Malloy, a Democrat, warned during his first weeks in office when proposing the shakeup. “Certainly there are a lot of people listening to this who believe things are fine just the way they are. I disagree.”

The 84,000-student state university system is on its fifth president in seven years and is now led by the governor’s former chief of staff, Mark Ojakian. Spending decisions (including the big raises given to former Malloy staff working at the regents) blemished the merits of the merger early on. Faculty regularly take votes of no confidence and rally against the system’s leaders. And the system’s accrediting body recently declined to approve a controversial plan aimed at saving money.

Republicans running for higher office have seen the Democrats’ vulnerability for the creation of the Board of Regents and several – including the party’s gubernatorial nominee – have questioned its existence. 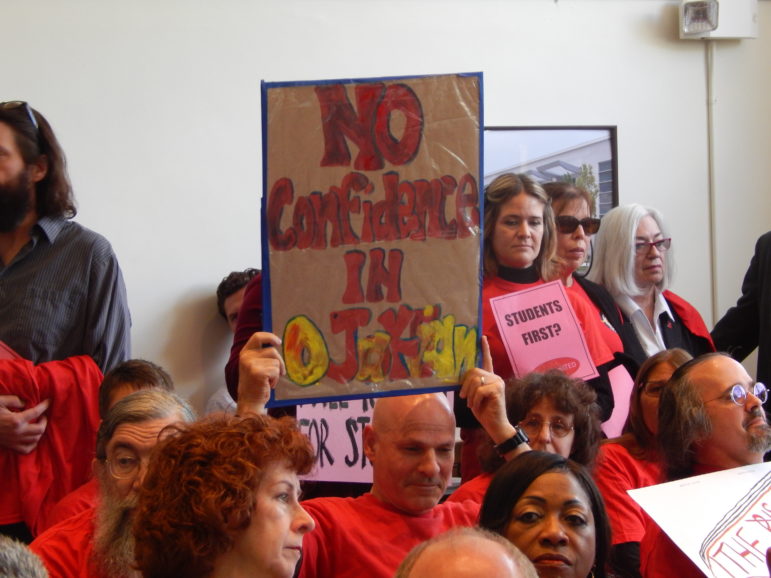 A faculty protester holds up a sign that read, “No confidence in Ojakian,” the system’s president.

“The Board of Regents has not met our state’s expectations since it was established by Dan Malloy in 2011, despite burning through nearly a quarter of a billion dollars in seven short years,” said Kendall Marr, spokesman for Republican gubernatorial candidate Bob Stefanowski. “This money would be better spent directly funding our higher education institutions instead of supporting the operating costs of a board which continues to demonstrate it cannot be trusted to use taxpayer dollars efficiently or effectively.”

Stefanowski has also taken issue with Ben Barnes, the governor’s budget chief, interviewing to becoming the regents next chief financial officer, saying it would be “rampant abuse of taxpayer money” to give a “lavish golden parachute to political appointees.”

Several former community college leaders still believe the merger was ill-conceived and have asked whoever becomes the next leader to reconsider the existence of the central governance setup.

Ned Lamont, the Democratic candidate for governor, is supportive of the current setup. He sees value in a system that provides certain administrative functions centrally. Forty percent of central office staff provide information technology services for the network of 17 schools, with almost 20 percent doing finance.

“I’m talking about consolidating back offices, doing everything I can to make things more efficient. So the same way that Ansonia and Derby can do well to share their services, I think that all of our community colleges would be well taken to have, you know, purchasing, IT, personnel and those type of things centralized. We would save a lot of money,” Lamont said, who is has been an adjunct  professor at Central Connecticut State Universities for the last several years.

In defense of the regents…

Ojakian left the Malloy administration in 2015 to become president of the regents with the goal of calming the constant turmoil and making the merger a success.

He had no background in higher education, but his long history in politics, along with a reputation for lowering the temperature in heated situations, landed him the job.

He believes the constant attacks on the regents by Republicans are about politics, namely Malloy’s history with the regents – and not the the merits of the merger.

“I wish people would have deeper policy conversations on the issues. I understand why they don’t happen. I understand the politics, that I am seen as the Dan Malloy person since I worked for the administration for five years,” he said during an interview. “I get it. I just watch and, you know, wait.”

Looking at some of the promises made – monetary savings, more faculty, and easier student transfers – show some of the goals of the merger have been achieved, at least partially.

For example, the courses students take to earn 26 various associates degrees now meet the curriculum standards for earning the first half of a bachelor’s degree at a regional Connecticut State University. Currently, 5 percent of community college students are on the path to benefit from a curriculum alignment that helps students transfer more seamlessly.

When it comes to savings, budget documents show that the system office enrolls 55 fewer employees than the three separate central offices for the community colleges, state universities and online college used to employ – a 30 percent reduction.

If those employees were still working for the schools today, the system office budget would be spending $4.4 million more on salaries this fiscal year. Collectively, those forgotten salaries saved the regents $32.3 million over the last 8 years. However, spending on retirement and health benefits and unfunded liabilities blunt those savings significantly.

Non-personnel related costs increased significantly in the two years after the merger, but are back down to just under $11 million a year.

The promise to hire additional faculty has not been achieved.

Ojakian said the need remains for a central office to manage the 17 colleges and universities.

“I think people forget that we provide a level of services that the community colleges and state universities would have had to otherwise provide,” he said. “Some people will always say the sky is red, even when it’s clearly blue. Some people will disagree no matter what.”

Most of the new money Lamont would distribute to cities and towns wouldn’t come out of the state’s coffers.