The state’s dozen community colleges are headed for a fiscal iceberg – and officials say there are few options to keep them afloat over the next few years.

One option is to close one of the regional schools.

“There are four community colleges within 12 miles of Hartford. We are asking one of those to be closed,” said state Rep. Terrie E. Wood, R-Darien. She was speaking late last year — shortly after the General Assembly passed a Republican budget that cut funding for the state’s community colleges by about $10 million next fiscal year.

The state budget ultimately signed by the governor retained that $10 million hit, a 7 percent cut – the latest reduction in state aid over the last several years. Declining student enrollment has not been adequate to compensate for the loss of revenue.

And so with the next fiscal year just four months away – and little hope that state funding will be increased as legislators grapple with a fiscal crisis of their own – the Board of Regents for Higher Education today approved a plan that rejects closing a campus and instead dramatically downsizes administrative staff. The move to consolidate 12 individually accredited community colleges into one accredited college with 12 campuses is projected to save $28 million.

“Given the cutbacks in support for these institutions in our state – particularly in the last budget – I don’t think there’s a lot of leeway,” Gov. Dannel P. Malloy told reporters on the eve of the vote. “Efficiencies are going to have to be found, and I think this is a set of proposals designed to effect those efficiencies.”

The college system’s president has repeatedly said his proposed reorganization and administrative consolidation – dubbed “Students First” – is the only alternative to closing a campus or further slashing library hours and other services students rely on.

In releasing his 82-page plan last week, President Mark Ojakian told reporters, “This is an attempt to stop the bleeding. It prioritizes shrinking resources… If we don’t do something, the only chance you have left is closing a campus.”

Faculty leaders aren’t pleased with the changes, however, and hope the New England Association of Schools and Colleges rejects the plan when it comes before them for consideration April 18. The community college system needs the organization’s accreditation so its students can receive financial aid.

So what exactly is being changed in this plan? Here’s a rundown of the changes most likely to affect students.

When students have a problem with a grade they received or other aspects of their education, department chairs at many of the colleges are tasked with trying to remedy the situation. Faculty rely on their department chairs to help them when problems arise and also to be their voice to college administrators.

Ojakian’s plan does away with these positions beginning in July 2020, replacing them with a handful of associate deans.

Currently, the teaching load on department chairs is reduced so they have the time to take on their added responsibilities. The time chairs are exempted from having to teach amounts to the course load of 62 full-time faculty, officials say.

“That reassigned time removes our most talented faculty from the classroom, increasing our reliability on adjunct faculty to educate our students,” Provost Jane McBride Gates explained during an interview.

By getting rid of chairs, more than 100 faculty members would begin teaching more courses – a change that would lead to an estimated 623 additional three-credit courses being taught by faculty.

Currently there are 800 full-time faculty scattered among the 12 community colleges. That figure, Ojakian promises, will not change with this plan. However, many of the additional courses that group will be expected to teach will be offset by the planned reduction of 29 part-time, adjunct faculty – a 1.2 percent reduction.

The proposed elimination of these department chair positions is upsetting to faculty. That’s because many view these chairs as their advocates who understand the nuances and challenges they face — problems that may be unique to their departments. And so doing away with these dozens of positions and replacing them with no more than four full-time associate deans at each campus is worrisome to them.

William Lugo of Eastern Connecticut State University, the faculty representative to the Board of Regents and a former department chair himself, told members of the governing board’s Academic and Student Affairs Committee this week that such a change will create more problems for them.

During a Faculty Advisory Committee last week, faculty leaders from around the state decided to look into whether the regents are violating their contract with the union by doing away with the department chair positions.

Common courses across the colleges

Very few community college students take courses at more than one campus. While it’s unclear whether there is much demand for that among students, the plan aims to test that by better accommodating students’ wish to take courses anywhere in the system they want. By doing so, leaders say, students can take courses that can fit better into their work schedules and other demands on their time. It also will help if a course they need is not available at the campus they typically attend.

The linchpin of this approach are the so-called “common courses” that will count toward meeting degree requirements no matter which campus they attend. 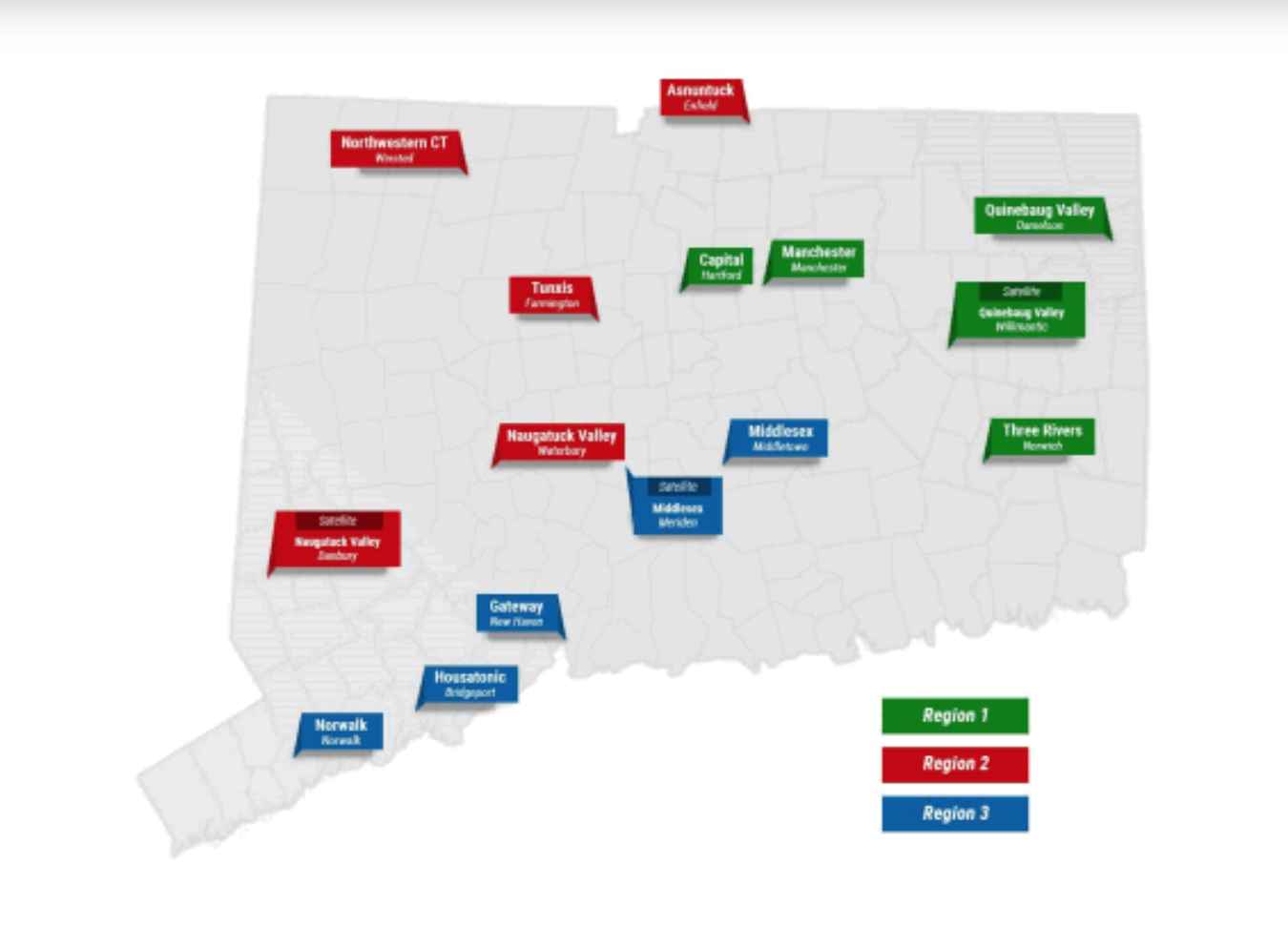 Where the state’s community colleges are located, and the new regions that will be overseen by a new administrative setup

But blending the curriculum standards for similar courses so that they fulfill degree requirements across campuses is messy – and time consuming – work.

It took a decade to ensure that the courses students took to earn  26 various associates degrees met the curriculum standards for earning the first half of a bachelor’s degree at a regional Connecticut State University. Currently, just 5 percent of community college students are on the path to benefit from that curriculum alignment.

The plan the regents plan to vote on Friday has an aggressive timeline.

It promises that faculty and college leaders will have reached agreement and voted by October on the common courses students will be able to take at any campus to earn a General Education Degree.

Faculty doubts that can be accomplished so quickly and still preserve high standards of educational quality. “It’s not going to be done by October,” said Robert Brown, a faculty member at Tunxis Community College in Farmington.

Developing common curriculum for up to 700 remaining courses will need to be accomplished over the next two years. “The goal is to streamline as many courses as possible,” Ojakian said.

Professors are skeptical. “This is a mess,” said Stephen Adair, a professor at Central Connecticut State University. “This doesn’t comprehend what’s being asked.”

“We feel like we are on the Millennium Falcon here. We are moving at light speed,” said ECSU’s Lugo.

College administrators say the deadlines can be flexible – even though the plan proposed to the accrediting body outlines firm deadlines.

Provost Gates  said the General Education course alignment is almost ready because of work that was done to ensure community college credits can transfer to the state universities.

“So the remaining are manageable,” she said.