This teacher of the year, now congressional candidate, has found the solution to getting more minority teachers 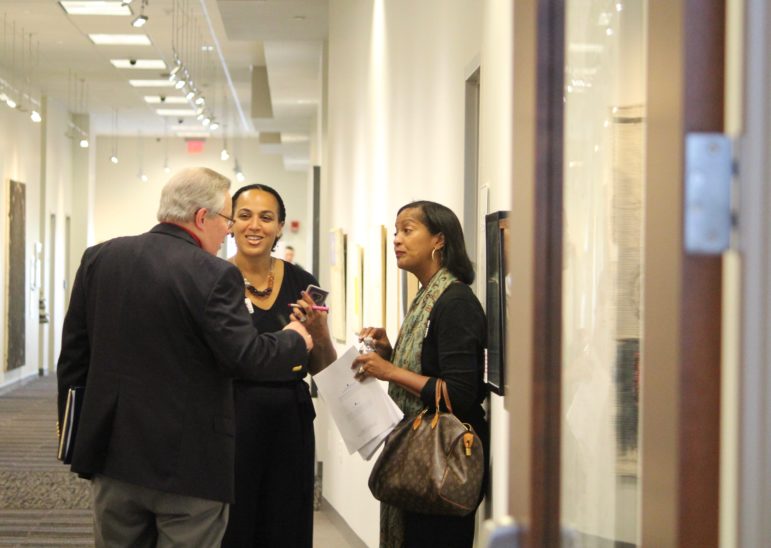 Jahana Hayes, right, talks with Jeff Leake, the leader of the state’s largest teachers’ union, and Rebecca Good, the leader of an alternative teacher preparation program. The group chatted outside the state education board’s meeting.

Jahana Hayes knows what it is like to be one of the few minority teachers in a school where the overwhelming majority of the students are black or Hispanic.

It wasn’t easy for Hayes to get to the classroom. After having a child in her teens, the single mom worked nights and attended college during the day, eventually earning a teaching degree from Southern Connecticut State University. She would go on to become the National Teacher of the Year in 2016.

Now – in-between running for Congress – she’s working to make the path to a teaching career easier for others who have backgrounds similar to the students who attend inner-city districts.

Her solution is simple: recruit existing staff already working in the schools – like paraprofessionals and secretaries – to participate in a certification program that accommodates a working person’s schedule and is more affordable.

“We just had to search and identify,” Hayes told the State Board of Education Wednesday.

In the program’s first three school years, Waterbury Public Schools has enrolled 14 existing school staff – all minorities – to enroll in Relay, a nonprofit with programs across the nation that allows participants to earn a teaching certificate for typically less than $6,000. It also accommodates participants so they can still work full-time.

Since then, Waterbury schools have had one of the fastest changing staff demographics, state data show. Just over 13 percent of the district’s staff are minorities, compared to nearly 9 percent statewide.

Finding minority teachers has challenged districts for years even as the number of black and Hispanic students showing up at public schools has increased each year. As a result, minority students are primarily taught by white teachers.

Of the almost 2,500 students enrolled in teacher-preparation colleges in Connecticut during the 2016-17 school year, 82 percent were white, 4 percent black, and 8 percent Hispanic, according to data from the state education department.

Statewide, the problem has been intractable – despite evidence showing minority teachers generally have a positive impact on minority students.

Relay was first granted permission to launch an alternative, non-traditional teacher certification program by the state education board two years ago as way of moving Connecticut forward. 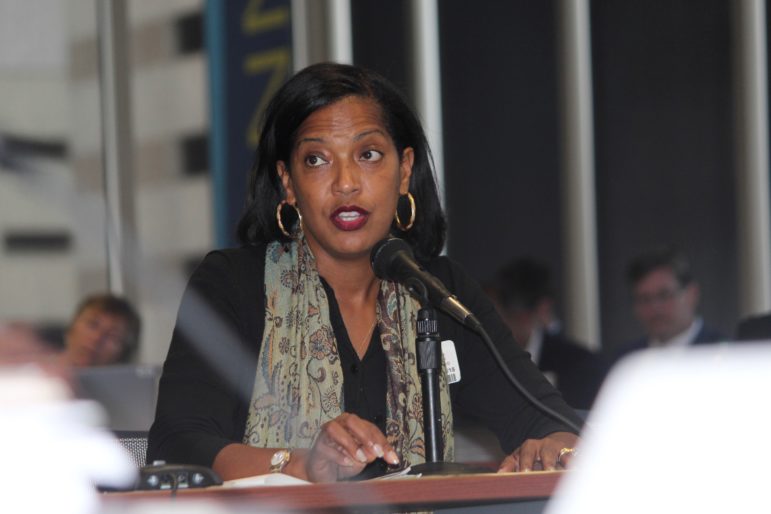 Jahana Hayes testifies before the state board of education

Dozens of leaders from teacher preparation colleges and teachers’ unions showed up at the time to blast the program. State legislators on a panel trying to tackle the mismatch also were critical.

But on Wednesday, as the state education board was scheduled to renew permission for the program to continue to operate and expand, public opposition was nearly non-existent.

Outside the board meeting, Hayes and Jeff Leake, the leader of the state’s largest teachers’ union, the Connecticut Education Association, and Rebecca Good, the leader of Relay, chatted.

The CEA and Leake chose not to testify against Relay this time.

A spokesman for the union, however, said its members “stand strongly opposed to Relay.”

“It’s really undermining the credibility of teaching,” said Nancy Andrews. “It’s a crash course in teaching. … It’s a shortcut and the methods have been called into question in the other states they operate.”

Hayes no longer teaches in a classroom and instead works to hire and prepare teachers for Waterbury Public Schools. She said those who complete the one-year Relay program must also do one-year of district-led professional development.

“Our main goal is to produce highly-qualitifed teachers and to support them all the way through,” Hayes told the board. “This program — the Relay program — really has helped us.”

During an interview after the meeting, she said,  “I think the pushback was for lack of information. I think people are incredibly protective of the profession. Look, I get it. But it’s not enough to say we only want it one way.”

With Relay’s approval by the state board, the nonprofit plans to continue to expand and enroll more teaching candidates. The first cohort had 45 people complete the program, of which 15 percent were white. Last year, 91 people completed, of which 8 percent were white. Other districts outside Waterbury that now participate include Hartford, New Britain, Middletown and East Haven. 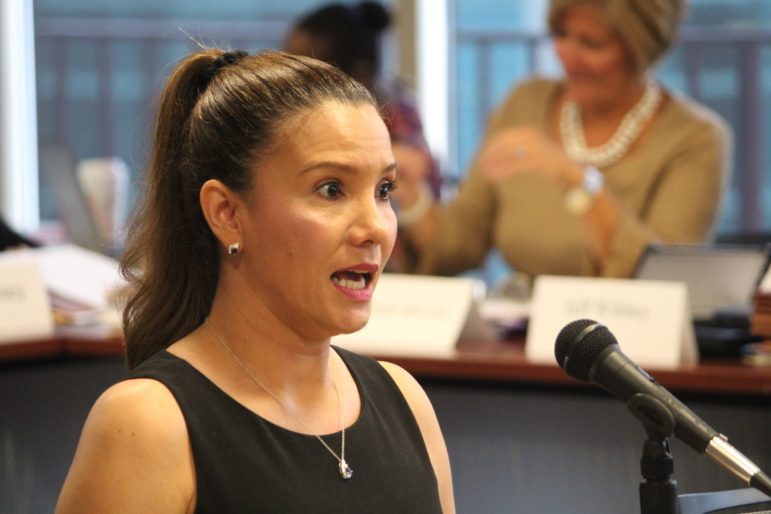 Claudia Cox, an immigrant from Colombia who has a masters degree in engineering, came to the state board to say thank you for making a teaching career possible for her. She couldn’t afford to go to a traditional teaching program, but now works as a bilingual teacher in East Haven.

The state has struggled for years to find bilingual teachers, despite decades of research showing English Language Learners perform best in a program that uses a hybrid of their native language and English. Three of the 14 students that have gone through the Relay program in Waterbury are bilingual teachers.

“I can relate to my students,” she said of her students with limited English. Relay “was a great experience for me… There are so many more who want to become teachers.” 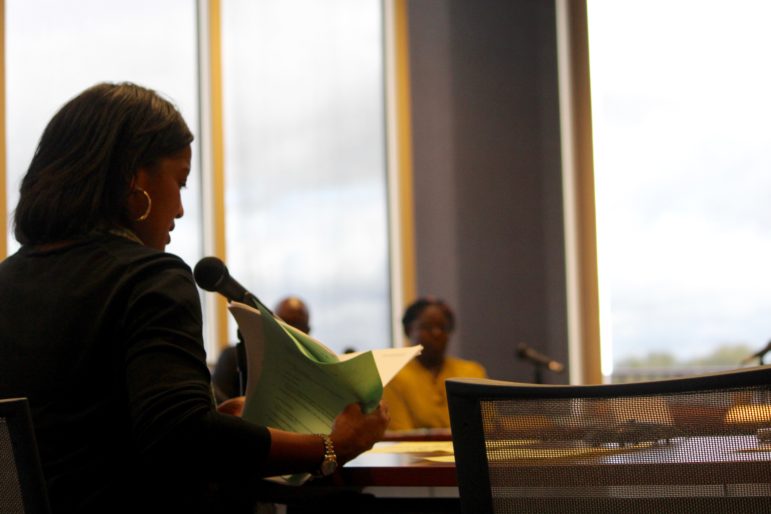 Jahana Hayes prepares to testify before the state board of education