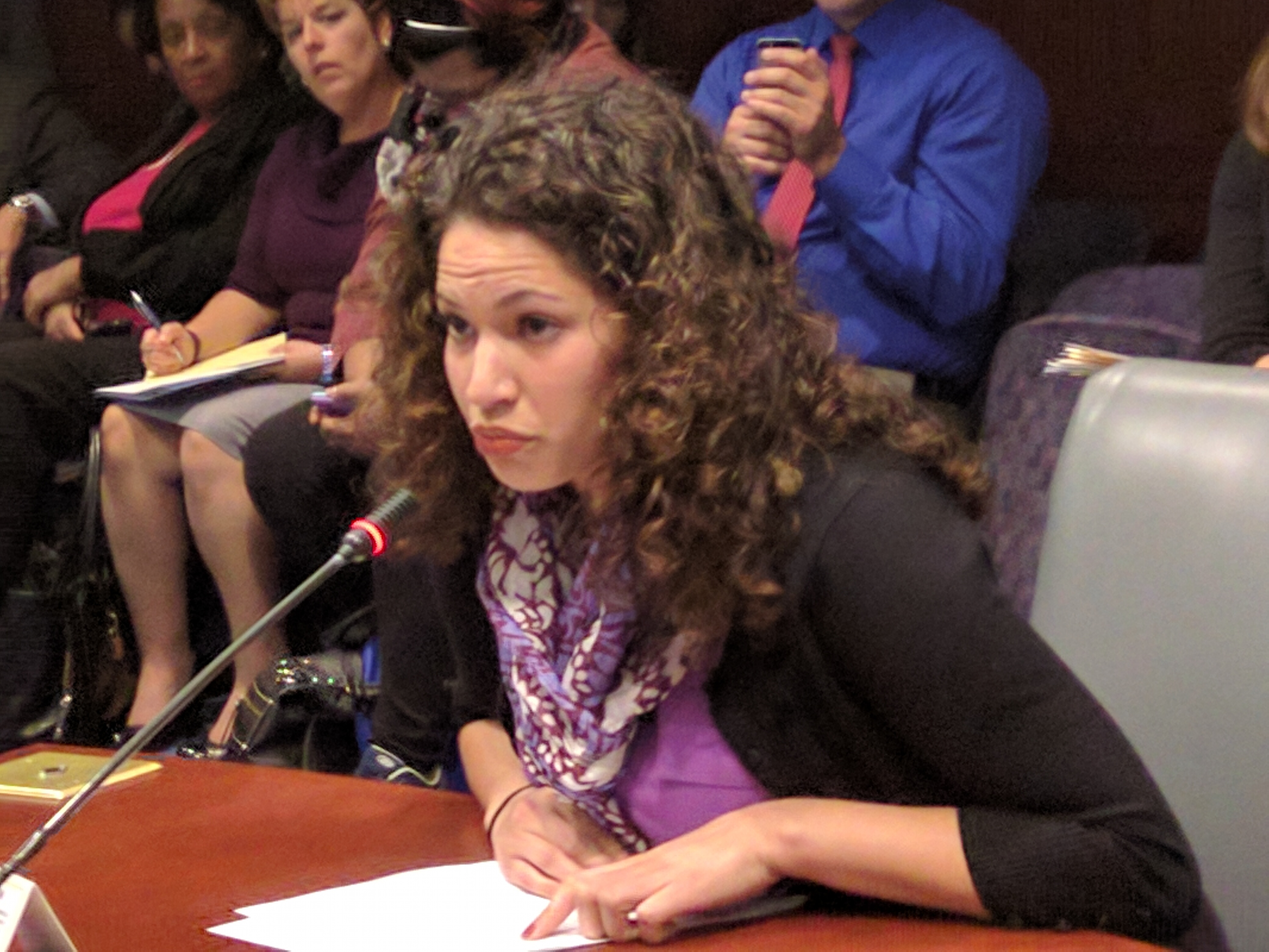 Kathryn Arroyo, a permanent substitute teacher in Waterbury, tells her story at the hearing.

Kathryn Arroyo, one of the hundreds of permanent substitute teachers working in Connecticut, can’t afford the time and expense of getting a master’s degree, but wants to teach in Waterbury where she grew up.

Now she will have an easier way to reach that goal, the Connecticut State Board of Education decided Wednesday.

Hoping to increase the number of minority teachers working in urban districts, the state board approved a controversial private program that fast-tracks would-be teachers toward certification.

The approval came over the objections of a long line of college officials, education students, and teachers’ union leaders. They all had concerns about the shortcomings of the program named the Relay Graduate School of Education.

“Approving Relay will be a significant step backwards in the state’s efforts to raise the quality of the teaching force that serves Connecticut’s children,” said Joseph Madaus, the associate dean at the University of Connecticut’s Neag School of Education. “It does not meet the standards that educators, legislators and citizens across the state have been working hard to enact. Instead, it threatens to undermine those very standards and weaken rather than strengthen the quality of the state’s teaching force.”

Right now, however, the state’s teaching force is not what it should be.

“We have students who do not have the educators they need,” State Education Commissioner Dianna Wentzell told the board before their 10-1 vote. “We have a system that has shortchanged our kids for too long… This is part of a solution to a number of our challenges.”

Arroyo would agree. Waterbury put her in the classroom starting last winter as a permanent substitute when a qualified science teacher could not be found.

Arroyo, who is Puerto Rican, has an undergraduate degree in biology from Connecticut College and has taught science in Mexico City and a charter school in New York City.

“Although I have been teaching for three to four years, I realized I was nowhere near getting certification when moving back to Connecticut,” Arroyo told the board.

She said she needs to work full-time to support herself and doesn’t want to take on a potentially large student loan she would need to return to school to earn a traditional degree and a state certificate.

Arroyo’s story is not unique for her or her students. Thousands of students throughout the state are being taught by long-term substitutes each year – most of them in the state’s lowest-performing districts.

That’s because districts are not able to find enough qualified teachers to fill open positions. On Oct. 1, 2014, one month into that school year, there were 250 teaching positions unfilled statewide. 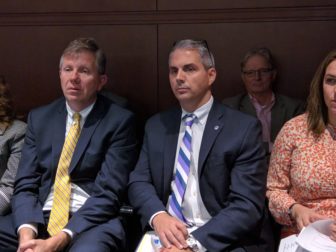 But the state should not resort to a “short cut, quick-fix approach” such as Relay, said Michael Alfano, the dean of the teacher preparation college at Central Connecticut State University and the president of the association of teacher colleges in the state.

The program currently operates in eight states – including New York, New Jersey and Delaware – though California and Pennsylvania have each recently rejected the program.

In Connecticut, Relay’s two-year attempt to win recognition from the Office of Higher Education, a separate state agency, has failed because of program deficiencies. It wants to qualify as an institution of higher education so it can to offer a master’s degree and its students can qualify for federal financial aid and student loans.

According to the agency’s June 24 evaluation of Relay, the program did not show it is financially stable, or that members of its board will not gain financially from its operation, or that staff who will be responsible for training future teachers have the appropriate background.

Wentzell, the state’s education commissioner, said that Relay’s application to the education department has now met her department’s strict standards after a “rigorous” process that improved its initial application.

Relay’s strategy is to recruit candidates who want to become teachers, are already working in public schools and have a bachelor’s degree. It has already recruited more than 70 people into the program in New Haven and Waterbury and plans to expand to New Britain, Bridgeport, East Hartford and other impoverished districts who struggle to attract qualified and minority teachers.

Relay’s application to the State Board of Education

Evaluation of Relay by CT Office of Higher Education

While traditional teacher preparation programs are currently at least four years long, Relay’s program gets students ready for the classroom within one year. The strategy is to team up its students with a mentor teacher already working in the district daily for at least 45 minutes. In addition, the Relay students meet at least two times a month for a full-day Saturday class and after school at least three hours each week to learn the content they will teach, classroom management techniques and other teaching strategies.

For now, the program will be free for all participating students, who are hand-picked by school district leaders, but eventually tuition will increase to just over $3,000.

Part of the distrust of Relay stems from the involvement of Dacia Toll, one of the co-founders of Achievement First, operator of the largest network of charter schools in Connecticut. Toll is also on the Relay board.

Achievement First schools in Connecticut are among the most segregated in the state and regularly have among the highest suspension and expulsion rates.  Its schools have also skirted state laws that require at least 70 percent of their staff to be certified to teach.

As a result, the state board has put some of the schools on probation, while simultaneously allowing enrollment to increase to alleviate long wait lists.

Rebecca Good, the leader of Relay in Connecticut, shares details of the program with the CT state Board of Education. Listening in the background are leaders from the state’s teachers’ unions and teacher preparation colleges.

“Teachers will be trained in the no-excuses approach,” Kate Field, a teacher development specialist at the Connecticut Education Association, the state’s largest teachers’ union, told the education board.  The methodology promotes strict – some would say, harsh – discipline for minor infractions as part of its overall approach to learning.

“We are not teaching that. We are teaching people to be positive,” said Atkins during an interview. Atkins is the co-founder of Uncommon Schools, a network of charter schools that operate throughout Massachusettes, New York and New Jersey.

How Relay’s performance will compare to traditional teacher preparation programs operated by public and private universities remains to be seen, since those programs have their issues, too.

Their graduates regularly share stories with the state board about being unprepared to teach. With the state’s public and private colleges graduating about 3,500 teachers each year, two recent national surveys found that, in some cases, nearly two of every three new teachers felt they had been unprepared for the classroom.

Graduate-level teacher preparation programs, which will now be in direct competition with Relay, last year awarded 1,918 students a master’s degree to teach.

Just before approving Relay’s application, Allan Taylor, the chairman of the state board, asked a telling question: How many student teachers actually end up teaching, and are they effective?

Relay officials responded that two-thirds of their students go on to teach, but nothing in the board materials prepared by officials at the state Department of Education provided information on Relay’s outcomes in other states.

The Board of Regents, which runs the state’s largest public college system and graduates nearly half of the state’s future teachers, does not follow up with their graduates in a measurable way to find out if they are teaching, how they are doing in the classroom and where college programs could improve. The University of Connecticut tracks some details on their graduates.

That’s all going to change in September.

The state department is gearing up to have a website available to the public that will share individual programs’ graduation rates, pass rates on teacher exams, and whether graduates go on to teach and remain in the classroom. The department also will release the results of surveys of recent graduates and their principals, linked to specific programs. 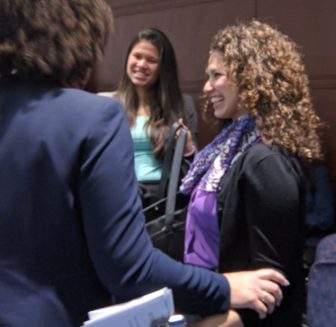 Kathryn Arroyo, right, celebrates with her sister and others after Relay Graduate School for Education is approved as a teacher preparation program, paving the way for her to become a teacher.

“For the first time ever, this will all be transparent,” said Sarah Barzee, the education department’s chief talent officer.

And when programs don’t meet the department’s standards, state officials promised to hold them accountable, including the Relay program if need be.

Arroyo, the first in her family to graduate college, is confident she and others in the program will not disappoint.

“I deserve to be a teacher,” she said.

Correction: Uncommon Schools operate in Massachusettes, New York and New Jersey. A previous version of this story inaccurately described where its schools are located.