Ned Lamont has spent months beating back accusations from his Republican rival that he would order a massive state tax hike if elected.

But as the Democratic gubernatorial nominee has built his defense, he also has painted himself into a fiscal corner, ruling out most options available to close a major post-election deficit in state finances.

A quick run-down of what Lamont has said:

He has pledged throughout the campaign to prioritize municipal aid and higher education.

He has said definitively that he would not raise either the income or sales tax rates.

He has ruled out tapping emergency reserves that hold $1.2 billion now, and could be worth nearly $2 billion next summer.

He has pledged to cut income tax burdens on low- and middle-income households by bolstering the property tax credit, phased in over his first three years in office, that would eventually cost the state an estimated $400 million a year.

And when it comes to the final remaining major option — another round of concessions from unionized state employees — Lamont said he hopes to find major savings only through “win-win” reforms that wouldn’t freeze pay or reduce benefits.

All of these promises raise one overriding question: how would Lamont balance the first two-year state budget after the election?

State finances, unless adjusted, are slated to run $2 billion or 10.5 percent in deficit in the first year, according to the legislature’s nonpartisan Office of Fiscal Analysis. OFA recently downgraded slightly the projected shortfall for the second year, but it still stands at more than $2.4 billion, or 12 percent.

And state finances continue to trend into the red for another two years after that.

Lamont seems to have no solution for how to deal with this problem.

“We’re going to hold the line on the income tax, … not going to raise rates on the sales tax,” Lamont told WFSB-TV 3’s Dennis House during an appearance last week on Face The State, a Sunday morning political affairs program.

Those comments echo a similar pledge Lamont made last week at The Bushnell in Hartford during a candidates’ forum held by the Connecticut Retail Merchants Association.

Together those taxes raise almost $14 billion per year and pay for nearly three-quarters of the General Fund. 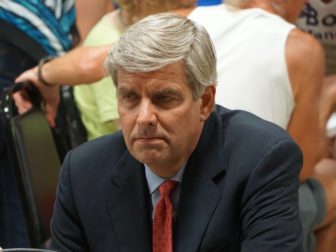 Although Republican gubernatorial nominee Bob Stefanowski has charged repeatedly that Lamont would order major tax hikes if elected to balance Connecticut’s books, Lamont says he would consider only small revenue hikes, possibly through a fee on sports betting, or by repealing some of the existing sales tax exemptions.

Unlike Lamont, both Stefanowski and independent gubernatorial candidate Oz Griebel have left open the prospect of tapping reserves — commonly known as the rainy day fund — to whittle down those projected shortfalls.

According to Comptroller Kevin P. Lembo’s office, the reserve is projected to hold just under $1.2 billion once final audits on the 2017-18 fiscal year, which ended on June 30, have been completed.

In addition, both Lembo and Gov. Dannel P. Malloy’s budget office project the state could be poised to deposit another $812 million to $817 million this fiscal year.

If Connecticut’s next governor and legislature were to tap these reserves and projected reserves, and apply them to the deficits in the next biennial budget, a $4.4 billion, two-year problem could be cut nearly in half.

Lamont took that option off the table during an appearance last weekend on Face The State.

Referring to tapping reserves and to Griebel’s proposal to defer contributions to public-sector employee pension funds, Lamont told House “that’s the exact type of kicking the can down the road that got us into this mess over the last 30 years. I’m going to deal with it up front.”

During an interview Tuesday, Lamont repeated his belief that using one-time reserves to cover recurring costs in the state budget is the easy way out. “It takes all of the pressure off of the stakeholders to fix the structural deficit,” he said.

By stakeholders, Lamont means municipalities, among others. He believes Connecticut’s cities and towns can economize by regionalizing services, allowing the state to trim local aid without forcing cities and towns to increase property taxes.

Another set of stakeholders is state departments and agencies; the Democratic nominee says he will press for greater efficiencies across the board.

But the biggest expense in state government operations involves salaries and benefits, and Lamont’s final set of stakeholders — employee unions — have already granted concessions in 2009, 2011 and 2017.

The most recent deal, which included a wage freeze and new restrictions on health care and pension benefits, also imposes significant limits on the state’s ability to lay off workers for four years — including the first two years of the next governor’s term.

Lamont has acknowledged that given those limits, the next governor would lack the leverage to force another round of concessions talks. But he also remains hopeful that the unions will come to the table anyway.

Lamont doesn’t like the word “concessions” and instead has emphasized he’ll ask unions to meet with him to discuss “reforms” to contractually guaranteed benefits. Together, he says, his administration and labor could identify efficiencies that would save the state money and prove acceptable to both sides.

But would Lamont rule out seeking “reforms” that would curtail health or retirement benefits? And would he pledge not to seek wage freezes like those granted by unions in the last three rounds?

“I don’t want to rule anything in or out,” Lamont told the CT Mirror during a late August interview.

“Ned Lamont’s claims that he would be able to manage the fiscal crisis facing our state rings hollow,” Stefanowski campaign spokesman Kendall Marr wrote in a statement. “His refusal to address the $2 billion budget deficit our state will face during the next governor’s first year in office show he is unfit to lead our state through this crucial period.”

[Stefanowski also has not released a detailed plan showing how he would close the projected $2 billion shortfall in the 2019-20 fiscal year.] 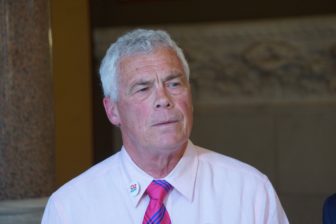 But Griebel said Lamont’s stand on the rainy day fund leaves him no chance of balancing state finances, let alone of delivering the tax cuts the Democrat has promised.

“If it’s not raining now, what does rain look like?” Griebel said. “What is his alternative? How is he going to close a four-and-a-half-billion-dollar deficit? I don’t get it.”

Griebel also charged Lamont with trying to appease an electorate with promises that fool no one. “This sense of just ‘trust me’ is idiotic,” he added. “They assume the voters don’t see through this. They do.”