With labor, Lamont carefully treads a path blazed by Malloy 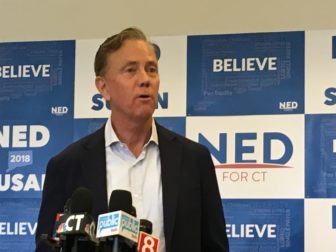 Ned Lamont has spent months trying to distance himself from the unpopular Democratic governor he hopes to succeed, but when it comes to the public-sector unions that bedeviled his predecessor, Lamont faces the same dilemma.

Knowing a huge budget deficit is just over the horizon, Lamont has been reluctant to pledge full support for all of labor’s priorities, as was Gov. Dannel P. Malloy in his 2010 and 2014 campaigns. And like the governor, Lamont is counting on labor’s sense of self-preservation to kick in and help him defeat a conservative Republican in November.

But will Lamont’s broader promises of collaboration with labor and tax fairness be acceptable to unions that want a reprieve from concessions requests and are lobbying instead for higher tax rates on wealthy households and big corporations?

“I’m not going to let Connecticut turn into Wisconsin,” Lamont told CT Mirror, a statement that echoes Malloy’s promises to protect collective bargaining, a balm he offered while demanding concessions. “We’re going to sit down and collaboratively do this together.”

Connecticut’s next governor takes office on Jan. 9 facing a projected shortfall of $2 billion in the first fiscal year after the election. That’s a gap of nearly 10 percent in an annual budget of $20.8 billion.

There is expected to be $1.1 billion in the emergency reserves, but the reserves can’t be used to mitigate the first-year crisis without causing problems a year later, when the projected budget gap gets worse, by another $600 million.

But perhaps the biggest handicap Malloy’s successor faces is that layoffs in any substantial amount are prohibited for the first two years of the next term by a 2017 concessions deal. That means neither Lamont, GOP nominee Bob Stefanowski, nor independent Oz Griebel, will have much leverage to coax further givebacks from unions to close that $2 billion hole.

Lamont doesn’t like the word “concessions” and instead has emphasized he’ll ask unions to meet with him to discuss “reforms” to contractually guaranteed benefits. Together, he says, his administration and labor could identify efficiencies that would save the state money and prove acceptable to both sides.

But would Lamont rule out seeking “reforms” that would curtail health or retirement benefits? And would he pledge not to seek wage freezes like those granted by unions during negotiations with Republican Gov. M. Jodi Rell in 2009 and Malloy in 2011 and 2017?

“I don’t want to rule anything in or out,” Lamont said. “But I’m going to sit down at the negotiating table.” Lamont hastened to add that he respects collective bargaining and would treat labor as a partner.

State employees and other public-sector workers say they can work more closely with governors and legislatures to find efficiencies in state and municipal services. “The workers know the answers to the problems are there,” said Lori J. Pelletier, the president of the Connecticut AFL-CIO. “They just need to be listened to.”

Like Malloy, Lamont has received the endorsement of the Connecticut AFL-CIO, the state’s largest labor coalition.

Malloy’s Republican opponent in 2010 and 2014, Tom Foley, only called for concessions in 2010, but Stefanowski has said he wouldn’t hesitate to go to court to challenge state employees’ health and retirement benefits contract if he fears that surging pension and retiree health care costs will sink the state budget.

“We’ve already heard from Stefanowski, who says he wants to take us out at the knees,” Pelletier said. “And we’ve seen in the past few legislative sessions hundreds of bills — not to mention amendments — trying to diminish or eliminate collective bargaining in the public sector.”

Republican lawmakers have tried for two years to pass bills curtailing retirement benefits starting in mid-2027 — after the current benefits contract expires — while budgeting some of the projected savings now.

Union leaders have said this approach is illegal and have all but guaranteed a court challenge if it ever is enacted.

A study panel created by lawmakers from both parties has recommended ending collective bargaining for public-sector benefits, though not wages.

Malloy and other Democrats have joined Republicans for the past two years in rejecting labor’s request for higher tax rates on the wealthy and on major corporations, while still seeking givebacks from the unions.

And while Malloy decried Walker’s approach in a once-union friendly state, he dramatically reduced the executive branch workforce, dropping it nearly 10 percent. He also obtained union concessions twice and got labor’s permission last year to defer billions of dollars in pension contributions until after 2032 — helping the state smooth out spiking costs over the next 10 to 15 years.

Rank-and-file union members have been watching all of these developments over the past eight years, Pelletier said. And while a gubernatorial candidate who respects collective bargaining and a partnership with labor is important, so are other things.

For one thing, the answer to seven decades of irresponsible state budgeting cannot exclude revenues, many labor leaders argue.

“The candidates for governor need to recognize that it’s time for better choices, not more of the same over-reliance on working people to pick up the slack,” Jan Hochadel, president of AFT Connecticut, said earlier this month.

“When the person cleaning an office spends a higher percentage of her income on taxes than the person running the office, that’s a problem,” Pelletier said.

“Workers need to hear from a champion,” Pelletier said, adding that too many in state politics fail to mention that pension costs are surging because governors and legislatures often failed to properly fund them for more than 70 years prior to 2011. “We’re going to choose a candidate who says he or she believes workers are not the problem here.”