A day after Connecticut experienced its own blue wave in the midterm elections, Senate and House Democratic leaders said addressing a minimum wage increase, tolls, and paid family medical leave will likely be among the top priorities the majority takes on in the upcoming legislative session.

Democrats say they took 24 seats in the state Senate and 92 in the state House of Representatives on Election Day, giving them overwhelming discretion in setting the general assembly’s agenda after struggling to work with a slim majority for the last two years. One seat in each chamber is too close to call and will likely result in a recount.

Their first legislative gains in 10 years broke an 18-18 tie in the Senate and increased their 80-71 advantage in the House. It also came amid Democrat Ned Lamont’s clinch of the governorship and decisive wins for the party in all other constitutional offices.

Senate President Pro Tem Martin M. Looney, D-New Haven, on Wednesday said the gains in both chambers represented a mandate on the policies enacted by Democrats.

Also Wednesday, Gov. Dannel P. Malloy said Republicans badly misjudged the Connecticut electorate by relying heavily on a strategy of campaigning against him while not repudiating the worst elements of President Trump’s administration.

Besides losing overall numbers in the House and Senate, Republicans also will see their influence diminished at the committee level.

Traditionally, most legislative committees have two co-chairs, one from the majority party of each chamber. But for the past two years, with Democrats controlling the House and the Senate deadlocked, each panel featured three chairmen: a House Democrat, a Senate Democrat and a Senate Republican.

Starting with the 2019 session and the new Democratic majorities in both chambers, the GOP will lose those chairmen posts — and the ability to help set committee agendas and schedule bills for public hearings and votes.

And because the entire legislature has been so narrowly divided along partisan lines, so have the committees’ memberships, leading to frequently deadlocked panels unable to adopt many bills.

Looney said advancing paid family medical leave and increasing the state’s minimum wage will be priorities for Senate Democrats, issues he believes the party will be able to advance.

Those are two issues several Democratic candidates campaigned on in the run up to the election, but which have typically been opposed by Republicans.

House Speaker Joe Aresimowicz, D-Berlin, said he wants to wait and see what is brought up by his chamber’s Democratic caucus, but acknowledged the overall majority “sets a lot of things in motion for me and there are a lot issues that the caucus talked about individually.” Aresimowicz said paid family medical leave was a big issue candidates heard about on the campaign trail.

“I do want to raise the minimum wage. I’m very honest about that,” said House Majority Leader Matt Ritter of Harford. Ritter said he would like to do that within a package that repeals the state’s estate tax.

The three Democrats also agreed that tolls will likely be discussed in the upcoming session, voicing support for Lamont’s idea to impose tolls on large trucks from out of state.

But Aresimowicz and Ritter also stressed that despite their majority, Democrats still plan to work with Republicans in a bipartisan fashion. Aresimowicz said lawmakers need to focus on fixing Connecticut’s problems, which can only happen if they work together.

“Republicans still have good ideas,” Ritter said. “And my guess is we will continue to pass 90 to 95 percent of things on a bipartisan basis and people are willing to work together.”

Sen. L. Scott Frantz of Greenwich, a member of the Finance, Revenue and Bonding Committee for the past eight years and one of its three chairmen for the last two, lost his bid for re-election in the 36th District.

Rep. Melissa Ziobron of East Haddam, the top House Republican on the Appropriations Committee for the past four years, was the favorite to become Senate chairwoman of the panel in 2019. Republicans not only failed to win control of the Senate, but Ziobron lost her bid to capture the vacant 33rd Senate District seat.

And while legislative leaders looked forward to a new session, Malloy, who is not seeking re-election, looked back Wednesday on a campaign that yielded historic results.

“Overwhelmingly I believe that our voters choose fairness in the country,” Malloy said during a mid-afternoon conversation with reporters in his Capitol office. “They chose decency and they chose honesty in the face of some very empty promises, both within our state and within our national politics.” 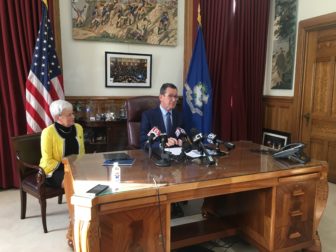 The governor said Tuesday’s voter turnout, which exceeded levels seen in several decades, an “unbelievable accomplishment” that was the foundation of so many others.

More than 100 women were elected to the new Congress nationally and the number of women winning seats in the General Assembly rose from 50 to 61.

Malloy dug deep into obscure history for one more note: Ned Lamont’s election as governor marked the first time since 1877 that Connecticut elected a Democrat to succeed a retiring Democrat as its chief executive.

And all of that happened following a campaign during which Republicans — and GOP gubernatorial nominee Bob Stefanowski in particular — blistered Malloy’s eight-year tenure with criticism.

“If people are as unhopeful about Connecticut’s future as Republicans say they are, then we should have lost a lot of seats,” the governor said. “Instead we gained a lot of seats. I think the people of Connecticut are smarter than we sometimes give them credit for.”

And while Malloy was the GOP’s target, Connecticut Democrats took aim at Trump, who also is unpopular in the polls in this state.

“Having a strategy that we’re going to run against a guy who’s not running for re-election while the other team is running against a guy who’s remaining in office, didn’t make a whole lot of sense,” Malloy said. He added that whichever Republican strategist crafted that plan, “should raise their hand so that they’re never hired to do anything again.”

The governor said he also believes voters were energized in part by the “destructive policies and politics” of the Trump administration — and a Connecticut GOP that didn’t speak out against them.

GOP state Chairman J.R. Romano said Malloy was fair game because he was one of the worst governors in Connecticut history.

“Hey, he doesn’t want to admit it, but even Ned Lamont ran against him,” said Romano, referring to Lamont television spots that mentioned he challenged Malloy for the 2010 gubernatorial nomination.