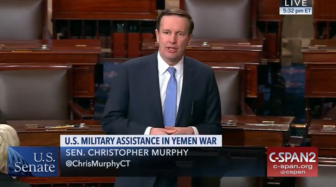 U.S. Sen. Chris Murphy speaks on the floor of the Senate Wednesday in support of his resolution to invoke the War Powers Act.

Washington – U.S. Sen. Chris Murphy inched closer to victory Wednesday in his longstanding campaign to end U.S. military support for the Saudi-led war in Yemen as the Senate took a historic vote to begin debate on a measure that would end that relationship.

The Senate voted 60-30 vote to begin debate on Murphy’s Yemen resolution, the first time Congress has had a full-fledged discussion about invoking the War Powers Act, a Vietnam-era law aimed at limiting presidential power to begin or escalate a military conflict.

Co-sponsored by Sen. Bernie Sanders, I-Vt., and Mike Lee, R-Utah, Murphy’s legislation would require President Donald Trump to end support for Saudi Arabia’s military actions in Yemen by pulling out all U.S. troops currently in or “affecting” Yemen within 30 days.

“Saudi Arabia is our ally,” Murphy said. “But when Saudi Arabia jumps into a pool of sharks, we are not obligated to follow.”

Murphy said there’s evidence Saudi Arabia has targeted civilians and civilian infrastructure with bombs and other weaponry obtained from the United States. He also said the kingdom has prevented humanitarian aid from reaching those in need in Yemen, where at least 85,000 children have died of starvation and disease, according to international monitors.

“It’s time for Congress to step up and right something that is very wrong,” Murphy said.

While Murphy’s resolution is likely to pass the Senate on Thursday, sending a strong rebuke to Trump, it’s not likely to go any further, at least not in the waning days of the 115th Congress.

The GOP-controlled House on Wednesday approved a resolution blocking the Yemen measure from coming up for a vote in that chamber this year.

Murphy, however, plans to reintroduce the legislation in the new Congress, in which Democrats will wrest control of the U.S. House from the GOP.

But that’s not the only punishment lawmakers are considering for Saudi Arabia. Murphy and other members of the Senate Armed Services Committee say tougher steps are warranted, including ending all U.S. arms sales to Saudi Arabia.

Sen. Lindsey Graham, R-S.C., said Saudi Arabia has been acting like a “wrecking ball,” and vowed to continue to seek ways to punish the kingdom, including an end of U.S. arm sales, in the next Congress, which will begin work in January.

“Do you really want to transfer your most sophisticated weapons to someone who is irrational on several fronts?” Graham asked at a press conference on Wednesday. “Maybe one day he wakes up and gives it to China, or Russia.”

Calls for sanctions on the kingdom are fueled by the murder of dissident and journalist Jamal Khashoggi in the Saudi consulate in Istanbul on Oct. 2 by a team of Saudi operatives. The lawmakers believe Saudi Arabia’s crown prince, Mohammed Bin Salman, ordered Khashoggi’s death.

Sen. Robert Menendez, D-N.J., said an end of U.S. weaponry to Saudi Arabia and other sanctions are needed to “send a global message that just because you’re our ally, you cannot kill with impunity and believe you can get away with it.”

The White House has issued a veto threat of Murphy’s legislation, should it reach the president’s desk, saying it “would harm bilateral relations in the region and negatively impact the ability of the United States to prevent the spread of violent extremist organizations such as Al Qai’da in the Arabian Peninsula and ISIS in Yemen.”

On Tuesday, Trump warned lawmakers to avoid taking any action that could put Saudi sales of U.S. weapons in jeopardy.

“I really hope that people aren’t going to suggest that we should not take hundreds of billions of dollars that they’re going to siphon off to Russia and to China,” Trump said.

Sikorsky and other Connecticut-based defense contractors have developed a lucrative market in Saudi Arabia that is threatened by the move towards sanctions on the kingdom.

“It’s going to be difficult to approve arms sales to Saudi Arabia without a willing Congress,” Murphy warned.

Sanctions could derail the sale of billions of dollars of Sikorsky-made helicopters and Boeing’s F-15 jet fighters, whose engines are made by Pratt & Whitney.

Saudi Arabia was awarded $138.9 billion in potential military contracts under U.S. Foreign Military Sales rules from 2009 to April 2018, according to a recent report by the U.S. Congressional Research Service.

That included $29.4 billion in F-15 sales and a “letter of intent” to purchase 150 Sikorsky Black Hawks and helicopters made by other companies valued at $29 billion. The Saudis also wanted to purchase 14 MH-60Rs “Seahawks” worth $1.9 billion for the Royal Saudi Naval Forces.