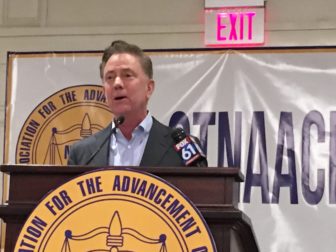 While the push to revitalize Connecticut will be a struggle, Gov.-elect Ned Lamont pledged to African-American leaders Saturday his administration’s effort would be defined by diversity and cooperation.

“I can’t promise you it’s a cakewalk for the next four years,” Lamont told a crowd of more than 200 civic and political leaders, students, businesspeople and other NAACP members gathered at the Hartford Hilton for a leadership summit meeting.  “We’ve got a lot of hard work we’ve got to do. … and I can’t do it without each and every one of you.”

Joined by his running mate, Susan Bysiewicz, Lamont said “Susan and I, every day, are going to work … to make Connecticut a place that you can call home. … a place of opportunity, a place where you know that you can afford to live (and) raise a family here with great schools.”

He added that “I really want to make sure we have a chance to make your best ideas go forward.”

Lamont, a Greenwich businessman who was elected to his first term as governor last month with overwhelming support from minority voters from Connecticut’s urban centers, is inheriting several fiscal challenges. 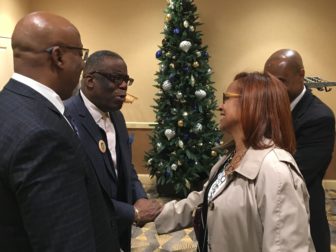 Analysts are projecting major shortfalls in state finances unless adjustments are made in Lamont’s first two-year budget.

More importantly, surging pension and other retirement debt costs stemming from seven decades of inadequate savings threaten to leach resources away from municipal aid, education, health care, transportation and other priorities for the next decade-and-a-half unless some solution is found.

Despite those challengers, African-American leaders said they have high expectations — but are prepared to be enthusiastic partners with the new governor.

Saturday’s gathering was titled “The 94 % Black Leadership Summit,” a reference to election results that showed 94 percent of African-Americans voted for Lamont at last month’s state elections.

“The people that voted for this administration, the 94 percent that are looking for and praying for a better way, we want a return on our investment,” said Connecticut NAACP President Scot X. Esdaile. “We don’t want the check with insufficient funds.” 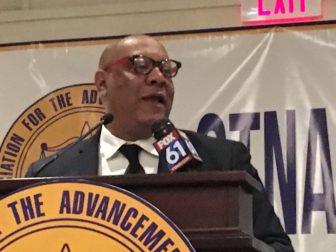 Esdaile added that “We earned the partnership. We earned the seat at the table. And we want to work with you to make sure there’s inclusion and harmony in our neighborhoods.”

Lamont insisted he is committed to plant the seeds of a brighter future, first through investments in schools and job training.

“This is an administration that is going to keep faith with education and opportunity and our teachers,” he said, pledging to work to increase numbers of teachers from racial and ethnic minorities. To encourage the best teachers to take jobs in some of Connecticut’s struggling school districts, the next governor said he would support some form of student loan assistance for those instructors.

Pledging to open up state contract awards to more women- and minority-owned businesses, Lamont took aim at the status quo. “Too many of those business opportunities, too many of those contracts seem to go to the usual suspects, sort of the same old gang, the same old same old — and that’s not right,” he said.

He also pledged to support state construction projects that guarantee a portion of jobs to urban residents, construction apprentices and former inmates in re-entry programs. 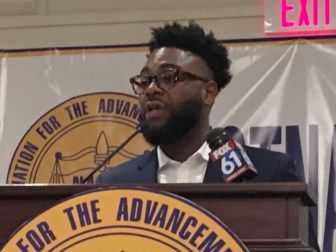 Through the first 40 days of the transition Lamont has exhibited that he clearly understands the need to have diversity,” Walker said, quickly adding that legislators will closely watch Lamont’s first budget proposal — due in mid-February — to see if the dollars match his stated priorities.

“Appointments are one thing,” she said. “Policy is next.”

Lamont also named Paul Mounds, who has held a number of policy and communications jobs in state and federal government, as his chief operating officer — who will oversee all agency commissioners. Mounds is African-American. 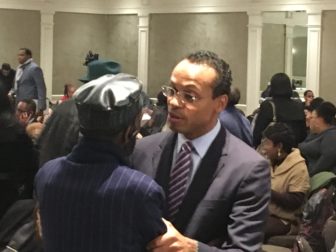 Lamont, who defeated Madison Republican Bob Stefanowski in a tight race, found humor in having to wait until the day after the election for urban results that made him the winner.

“Could you vote a little bit faster,” he told the crowd at the Hartford Hilton. “It was getting pretty late.”

Lamont then recalled that his running mate had been secretary of the state, Connecticut’s chief elections official, not long ago.

“That means we can do more for the people of Connecticut, and that means a $15 an hour minimum wage and paid family medical leave and pay equity for women and addressing the opioid crisis,” she said.