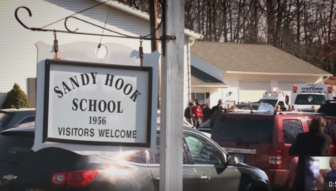 Sandy Hook Elementary School was torn down following the 2012 mass shooting in which 20 children and six adults were killed.

The 177-page Final Report of the Federal Commission on School Safety, released Tuesday, also encourages schools “to seriously consider partnering with local law enforcement in the training and arming of school personnel.”

“Teachers don’t want this. Parents don’t want this. Only Betsy DeVos, President Trump, and the gun industry think the best way to stop a school shooting is to load schools up with guns,” said Sen. Chris Murphy. “Arming teachers and rolling back school discipline reforms won’t make our kids any safer. It’s nonsensical and dangerous.”

“Nothing is more important than protecting our nation’s children,” the president said.

While it encouraged the arming of school personnel, the report did not recommend the federal government mandate the arming of teachers, a move that is supported by Trump.

Connecticut state law does not prohibit teachers and other school personnel from carrying weapons on campus. That decision is entirely left to the discretion of local school districts, and many have armed security on site.

Trump established the commission last March days after a mass shooting at the Marjory Stoneman Douglas High School in Florida. The commission was charged with reviewing safety practices and recommending best practices to keep students safe.

The recommendations have been panned by critics as a compendium of proposals that have been either adopted already by some states, including Connecticut, or have been under discussion for some time.

But in a conference call to reporters on Tuesday, DeVos said it also included some original recommendations, such as one calling on journalists to refrain from publishing the names and photos of school shooters and focus on the victims, instead.

“This report does not impose one-size-fits all solutions for everyone, everywhere,” DeVos said. “Local problems need local solutions.”

The report also said “fostering social and emotional learning can help prevent school violence,” and cited a May “information session” at the Department of Education where DeVos heard from Scarlett Lewis, who founded the Jesse Lewis Choose Love Foundation after her son was killed at Sandy Hook Elementary School.

The report also recommended states adopt extreme risk protection orders, which allow courts to temporarily take firearms away from people who pose a danger to themselves or others. Connecticut was the first to adopt a “red flag” law in 1999, after an employee of the Connecticut Lottery used a knife and gun to kill four bosses.

Several states have adopted red flag laws since Nikolas Cruz opened fire at Marjory Stoneman Douglas High School on Valentine’s Day last year, killing 17 students and faculty. Cruz had a history of troubling behavior and mental health problems, but was able to buy an assault rifle similar to the one Adam Lanza used in the Newtown massacre. Lanza obtained his weapon from his mother’s gun collection.

But the report declined to recommend raising the minimum purchase age for rifles to 21, saying underaged school shooters often obtained their weapons from family members.

The school safety commission also proposed repealing Obama administration school discipline policies. Those policies, announced in January 2014, are aimed at keeping more children in school and reducing glaring racial and ethnic disparities in who gets suspended, expelled or arrested.

Obama’s discipline policies seemed to be aimed at places like Connecticut, which had the ninth highest suspension rate in the U.S. during the 2014-15 school year, according to the U.S. Department of Education’s research arm. Black and Hispanic students are much more likely to get into trouble in school compared to their white classmates.

In recent years, the state of Connecticut has made it more difficult for local school districts to expel or suspend students from school for non-violent offenses. And when students are expelled, the state board of education has set standards for the alternative education they must be offered instead, along with requirements for how to return to school without delay. State laws were also changed to prohibit youth from being arrested and referred to criminal court for skipping school.

Leon Smith, director of the Center for Children’s Advocacy’s Racial Justice Project, which advocated for the Obama-era reforms, said the panel’s recommendations are worrisome.

“It just brushes aside widespread data that shows students of color are disciplined and arrested at disproportionate rates,” he said Tuesday. “They are falsely connecting children being treated fairly with schools being less safe.”

It remains to be seen how much weight the Trump Administration will put behind these guidelines, and whether federal funding will be cut if states don’t follow them, and whether the U.S. Department of Education’s civil rights division will investigate complaints when significant disparities in school discipline exist. Recent articles have disclosed that the department has dismissed such complaints at much higher rates than in the past.

“That’s a hammer that forces districts to focus on more favorable practices,” said Smith, referring to the Office for Civil Rights. “When your federal government says this is an issue, this is a problem, it needs to be paid attention to – you pay attention to it.”

Gov. Dannel P. Malloy said in a statement  Tuesday that he is “disgusted by the commission’s recommendation to reverse the Obama administration’s efforts to reduce racist outcomes in disciplinary action. This action will do precisely nothing to reduce mass shooting, will not make our classrooms safer, and will perpetuate the cycle of poverty that ensnares to many African American and Latino kids in this country.”

State Rep. Toni Walker, D-New Haven, who shepherded many of the school discipline reforms through the General Assembly, said keeping kids in school is what’s best for children whose poor behavior is sometimes a response to the trauma they are facing outside of school, such as homelessness or having an incarcerated parent.

Estela López, the vice chairwoman of the state Board of Education, said the state should be oversee school discipline.

“There have to be actions and strategies that says this is not acceptable,” Lopez said. “The disproportionality is very visible and it cannot be ignored like it was before.”

The nation’s teachers’ unions were harshly critical of the report Tuesday.

“Betsy DeVos’ U.S. Department of Education is using the commission to pursue her agenda to dismantle students’ civil rights protections — an agenda that affects our most vulnerable students the hardest,” said National Education Association President Lily Eskelsen García. “We do not need the appearance of safety; we need real solutions that create safe schools and address the underlying root of school violence.”

The school safety report also lauded Congress’ approval of the “Stop School Violence Act, which authorized more than $1 billion in grant funding through Fiscal Year 2028, to support school violence prevention programs throughout the country. Sandy Hook Promise, a group formed after the Newtown shooting, receives funding from the program.

The report also praised a bill sponsored by Murphy and approved by Congress, the Fix NICS Act, which strengthens the federal firearms background check system.