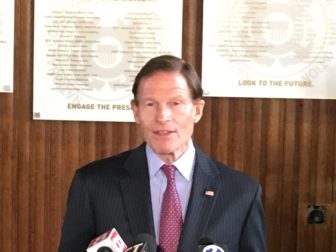 New London — U.S. Sen. Richard Blumenthal pledged Monday to introduce legislation to restore wages for all U.S. Coast Guard personnel, about 43,000 individuals whose pay will be suspended Tuesday as part of the ongoing federal shutdown.

Making his announcement at New London’s Union Station — less than a mile from the Coast Guard Academy — Connecticut’s senior senator said he remains hopeful Congress can reach a bipartisan compromise to end the shutdown when it reconvenes on Thursday.

But Blumenthal quickly tempered that prediction when he declined to speculate whether President Trump would accept such a deal — particularly if it does not include funding for a southern border wall.

“The coast guard is vital, not only to the academy here … but also to the safety of our shores, the interdiction of drugs and other law enforcement functions,” Blumenthal said, adding it is a “quirk of history” that coast guard personnel could go unpaid Tuesday while those in the other four military branches will not.

“Unfortunately, unfairly and unacceptably, the Coast Guard is the only military service unpaid during this Trump shutdown,” he added. “No pay makes no sense.”

While the Army, Navy Marine Corps and Air Force all fall under the jurisdiction of the Department of Defense, the Coast Guard is funded through the Department of Homeland Security, which is one of the federal agencies unfunded during the shutdown.

According to Blumenthal’s office, the Trump administration had identified temporary funds to cover Coast Guard pay, but that funding expires starting Tuesday.

Blumenthal’s office could not say how many Coast Guard personnel in Connecticut would be affected by the proposed legislation, and Coast Guard media relations personnel could not be reached Monday for comment.

Congress reconvenes on Thursday and Blumenthal said he expects both sides would support pay restoration legislation for Coast Guard employees.

“We have traditionally supported the Coast Guard on both sides of the aisle,” he said. 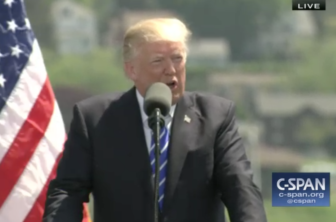 Blumenthal extended his optimism to the federal budget standoff, saying compromise, temporary funding legislation passed in the Senate earlier this month is a starting point.

“I am hoping that the shutdown will be resolved very quickly,” he said. “There is common ground. … I am hoping to expand on that.”

But even if Congress reaches a bipartisan solution, would it be acceptable to the Republican president?

“To predict what President Trump may or may not do is pretty hazardous,” Blumenthal said, adding the outcome may hinge on Trump’s insistence on funding for a southern border wall.

“The wall is a non-starter,” the senator said. “It has been for as long as this shutdown has gone on and for a long time before it.”

“I don’t think the Democrats care,” he said Monday. “They don’t care about the American lives that are lost through this political battle.”

Romano cited the separate cases of California police officer Ronil Singh and Norwich woman Casey Chadwick. An undocumented immigrant was charged this month with the fatal shooting of Singh, sparking criticism of sanctuary city laws from California law enforcement personnel. Jean Jacques, who had immigrated illegally from Haiti to the U.S., was convicted in April 2016 of fatally stabbing Chadwick in her apartment.

Blumenthal said Democrats do care about border security, and that he believes Democrats and Republicans in Congress could unite on several ways to protect the nation’s borders.

“The way to do it,” he said, “is through better technology, more manpower, surveillance sensors, drones — the kinds of systems that really work.”