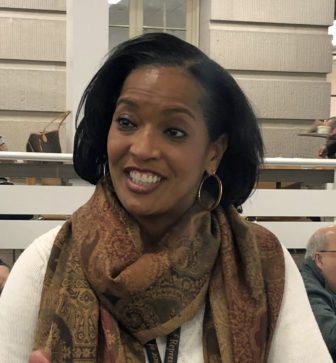 Washington – Rep. Jahana Hayes, the 2016 National Teacher of the Year, has been given the job in Congress that she really wanted — a seat on the House Education and Labor Committee.

The committee has jurisdiction over federal education issues and labor concerns, including wage and workplace safety issues.

In a statement released Tuesday, Hayes said “the honor of being named to this committee ranks up there with being named national Teacher of the Year.”

“The work of this committee is vital, as the policies we set in place will filter out to every classroom and community in America,” she said. “I intend to bring thoughtful, academically sound, student-centered deliberation to our meetings, and hopefully help my colleagues better understand how the legislation that is passed translates in a classroom setting.”

Hayes also said “having worked in the profession for years, I hope to use this role to elevate the voices of teachers and illuminate the work educators engage in every day on behalf of our students and communities.”

In a statement released late Monday, Pelosi announced Hayes was assigned to the committee, as were 13 other Democratic House freshmen. Pelosi also announced 16 new members to the House Armed Services Committee and one new appointment to the powerful Ways and Means Committee, Rep. Jimmy Gomez, D-Calif.

Gomez won a seat on that committee after Latino lawmakers complained that there isn’t a Hispanic on the panel, which has oversight of tax policy and Social Security.

“Democrats are thrilled to announce that these outstanding members will join these critical committees, where their fresh vision, bold voices and vital expertise will be powerful assets in our mission to deliver For The People,” Pelosi said in a statement. “With their strong leadership, Democrats will deliver great progress to promote the well-being of the American people and defend the national security of our country, restoring a Congress that works for the public interest instead of the special interests.”