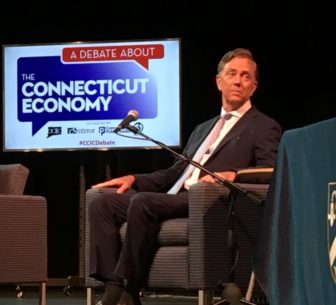 Ned Lamont at the University of St. Joseph for a debate on the economy last year.

Gov. Ned Lamont convened Monday what could be the last step before trustees formally select the next president of the University of Connecticut: An opportunity for the leading candidate to talk privately with Lamont and a half-dozen business leaders about the governor’s desire for UConn to play a greater role helping to drive economic growth.

The meeting at the Executive Residence was the governor’s second with the candidate, who has not been publicly identified by the governor’s office or a university search committee. UConn’s trustees began the search after Susan Herbst announced May 21 that she intended to step down this summer after eight years as the university’s 15th president.

“He fully respects the process the board of trustees is going through, and it is their selection,” said Colleen Flanagan Johnson, a senior adviser to Lamont. “But he and the chairman of the board of trustees agree that it is important the governor have a good feel for whomever it is, the president of UConn, because they will be working closely on a number of issues.”

And those issues include workforce development and economic development.

Invited to the residence Monday were executives from health care, insurance, private equity and other businesses, as well as higher education and the governor’s senior staff. Lamont wants UConn and private employers to have a partnership in workforce development, an element he sees as vital to economic growth.

Lamont, a Greenwich businessman married to a venture capitalist, has been trying to engage business leaders on ways to improve how Connecticut is seen as a place to do business, as well as recruit some to his administration. As Lamont cajoles businesses to expand here, he wants the state to be able to promise a qualified workforce.

Against that backdrop, Lamont has taken on a more visible role in the selection of the next UConn president. Eight years ago, a trustees-led search settled on Herbst during the transition between the administrations of Govs. M. Jodi Rell and Dannel P. Malloy. The outgoing and income governors each interviewed Herbst and signed off on her hiring.

Thomas E. Kruger, the chairman of the UConn Board of Trustees, has met with Lamont and the governor’s senior staff about the search process. Kruger declined comment on the latest meeting, saying the search committee has agreed that its deliberations and meetings would remain confidential.

Lamont met with two finalists the weekend of Jan. 12, just days after his inauguration, according to his staff. With the passage of two weeks without trustees voting on a choice, it’s become clear that Lamont wanted further vetting of man the trustees appear ready to hire.

“It make sense to have the next potential leader meet with some of the largest employers to talk about what makes sense from both perspectives — what UConn is looking to do, what his future vision of UConn is,” Flanagan Johnson said.

The session early Monday evening at the residence was a chance for the candidate, the governor and business leaders to take measure of how they would work together.

“I think it’s better for everybody involved,” she said. “It’s definitely a two-way street.”

The Board of Trustees has sole authority to select a president, but governors generally have as much influence as they wish for two reasons: The governor appoints a majority of the board, and a potential president of a public university is unlikely to take the job without the support of a sitting governor.

While involving business leaders in the vetting of a potential president is unusual, the governor has repeatedly signaled his intention to develop a stronger relationship with the business community. On Friday, he nominated a former IBM executive, Josh Geballe, as the commissioner of administrative services, the agency responsible for purchasing, personnel and information technology.

He hopes to outline plans to reorganize the Department of Economic and Community Development later this week.

The school did not become the University of Connecticut until 1939, four years into the 27-year tenure of Albert N. Jorgensen, who oversaw the school’s greatest period of growth.

In the nearly 57 years since Jorgensen’s retirement in 1962, the school has had eight presidents with tenures ranging from the three years of Herbst’s immediate predecessor, Michael J. Hogan, to the 11 years of Philip E. Austin, who preceded Hogan.