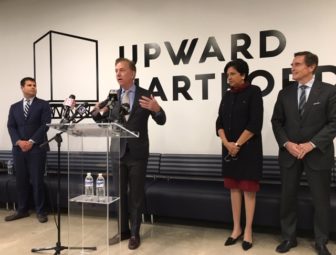 Gov. Ned Lamont, who promised to recast the state’s troubled relationship with business, invoked a halcyon time of corporate engagement in Hartford on Friday as he outlined a new approach to economic development to be led by David Lehman, a 41-year-old Goldman Sachs partner, and backed by the retired chief executives of PepsiCo and Webster Bank.

The governor showed off Lehman as the latest mid-career executive to join the new administration, someone Lamont hopes will be a savvy leader as well as a symbol of business leaders’ willingness to help Connecticut end a decade of economic stagnation and bad press.

After watching the governor’s inaugural on Jan. 9, Lehman made a cold call to Lamont’s transition team, seeing if he could help in some way. The call led to a breakfast with the governor’s chief of staff, Ryan Drajewicz, and Garrett Moran, the former chief operating officer of the Blackstone Group, who has helped to lead the transition.

“In less than two weeks, here he is,” Lamont said. “I could not be more proud to be able to have you there as a special advisor to the governor when it comes to what we have to do in terms of budget and policy and taxes…to make sure this is a state that welcomes and grows jobs.”

Lehman will serve as commissioner of the Department of Economic and Community Development and senior economic advisor to Lamont. Two former corporate CEOs and chairs, Indra Nooyi of PepsiCo and Jim Smith of Webster Bank, will lead the non-profit Connecticut Economic Resource Center in a new public-private partnership with DECD.

As is the case with the governor, Lehman will be working without a state salary, Drajewicz said.

Lamont, 65, a Greenwich businessman who has little familiarity with Hartford political and business history, fondly mentioned stories he’s recently heard about “The Bishops” of Hartford — the business leaders who lived in a time before mergers and consolidations robbed small cities like Hartford of deeply rooted corporations.

“This is going back a generation, when CEOs were welcomed into the discourse about the future of the state and how they could be involved, and I think we fell off of that a little bit,” Lamont said. “That’s one of the things I’m trying to revisit as we get a closer collaboration between business and government and, quite frankly, labor and government.”

Lamont introduced the new economic team during a press conference at Upward Hartford, a self-described home  to “some of the world’s most ambitious change-makers and entrepreneurs who come to connect, collaborate and create with fellow innovators.” It is based in downtown Hartford at the Stilts Building.

The building also is home to the intellectual property law firm of Cantor Colburn, which became the unofficial headquarters of the successful recruitment to Hartford of Infosys, a global tech firm that recently opened a regional technology hub here. 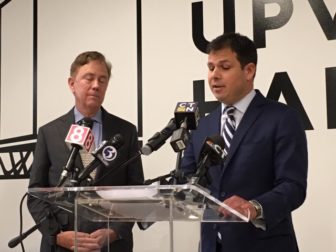 Lamont says Infosys can become a template for how to recruit new business: Nooyi introduced a senior Infosys executive to Lamont, who brought him to the DECD. Executives from the region’s top employers then convinced Infosys that Hartford had the workforce and base of insurance, health and advanced manufacturing company to support a technology innovation hub.

Nooyi, who graduated with Lamont from the Yale School of Management in 1980, described her first ride into Connecticut in the late 1970s, when companies were fleeing New York City for the suburbs of Westchester and Fairfield counties. A native of India, she flew to JFK and took Connecticut Limousine to New Haven.

“The driver said to me, ‘You are now entering the greatest state in the nation.’ Then as we got to Exit 2 and Exit 3, he said, ‘And lady, if you do very well, maybe you’ll get a chance to live in Connecticut. And if you do really, really well at Yale, you might even live in this town, Greenwich.’ ”

Nooyi moved 28 years ago to Greenwich, where Lamont has a home and Lehman lives with his wife, Laura, and two school-age children.

Lehman said he reached out to the transition after hearing Lamont’s inaugural speech about remaking government. The speech and the governor both struck him as accessible and pragmatic.

“It just really spoke to me in a way that politics, candidly, has not previously,” he said.

Lehman said he has seen other Goldman Sachs partners leave Wall Street for government service, though none in Connecticut. Lamont said he hopes the willingness to serve the state will be infectious.

“Look, if I don’t believe in the state, how do you get other people to believe in the state? So, I think attitude is important,” Lamont said. “We took a blow to the mid-section when GE left. It wasn’t that many jobs. It was a public-relations disaster for us.”

On Friday, Lamont was happy to bask in congratulations about his new appointments.

“I’ve got to show some results on this, but things are turning around,” he said. “And I think people are feeling it.”