Green New Deal no deal (yet) for some Connecticut Dems 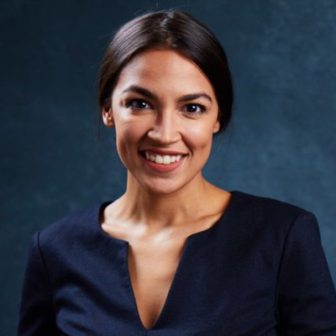 But two Connecticut lawmakers have taken a more measured, cautionary approach to the bill GOP conservatives are denouncing as “brainless” and “delusional.”

“Rep. Hayes is still going through the details of the bill, so no decision on whether to support it has been made yet,” said Rep. Jahana Hayes spokesman Jason Newton.

Rep. Jim Himes, D-4th District, has also not voiced his support for the deal, an aspirational package of proposals that include transitioning the country to 100 percent renewable energy and installing a high-speed rail system to reduce the population’s reliance on cars. The new deal resolution also calls for universal health care, a federal job guarantee program, and affordable housing for all. 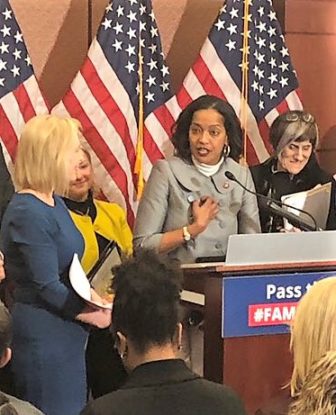 Reps. Jahana Hayes and Rosa DeLauro at a recent press conference in the U..S. Capitol.

“Climate change isn’t something we can kick down the road any longer. We need to take serious measures to address this issue head on,” Larson said.

DeLauro said she is a proud co-sponsor of the resolution.

“The Green New Deal is a bold framework to make investments in green jobs and green technology—something I have long fought for,” DeLauro said. “Climate change is a real and urgent problem that Congress must deal with.”

DeLauro also slammed the Trump administration for pulling out of the Paris Climate Agreement, saying “we cannot allow climate-deniers to set the agenda any longer.

With the election of many younger, more progressive Democrats in last year’s midterm elections, climate change has become a top issue for Democrats – even as some in the party shy away from the Green New Deal, saying its goal of zero carbon emissions by 2030 is unrealistic.

House Speaker Nancy Pelosi, D-Calif., praised the “enthusiasm” for the Green New Deal, but not the proposal itself.

Meanwhile, most Democrats eyeing the White House have embraced the plan.

Sen. Kamala Harris,  D-Calif., called the Green New Deal “a bold plan.” Sen. Kirsten Gillibrand, D-N.Y.,  told supporters she is “committed to the entire framework” of the proposal. Sen. Elizabeth Warren,D-Mass, co-sponsored the guidelines along with Sen. Bernie Sanders, while Sen. Cory Booker, D-N.J., said he is “excited to support” the “bold action on climate change.”

McConnell said that would “give everybody an opportunity to go on record and see how they feel about the Green New Deal.”

Connecticut Senators Richard Blumenthal and Chris Murphy are co-sponsors of the Senate version of the deal.

“Climate change is the most pressing problem facing our generation,” Murphy said. “It is already posing a security threat to our nation, and we are feeling its impacts in real time. We need bold ideas if we’re going to rise to meet this challenge. I’m proud to join Senator Markey and Representative Ocasio-Cortez as an original co-sponsor of the Green New Deal.”

Murphy, however, told reporters this week that not all Senate Democrats are ready to vote “yes” on the Green New Deal.

He said members could vote “present” as a protest of McConnell’s tactics.

“We have a lot of really important things to do” to combat climate change, Murphy said. “Political stunts are not one of them.”

Blumenthal said the Green New Deal is “aspirational,” but not a dream, as some critics have called it.

“If it is a dream, it’s the American dream,” Blumenthal said.