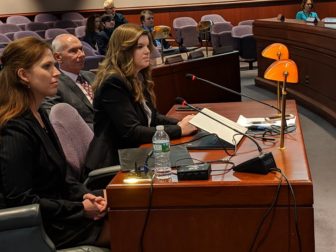 On the day before Gov. Ned Lamont released his first budget, the leader of the Connecticut State Colleges and Universities System had a chance to present a compelling study to the legislature’s appropriations committee — an economic analysis that shows the system pumped $11.1 billion in income into the state’s economy in 2017.

The study was originally released in December, CSCU President Mark Ojakian said, but at the invitation of Rep. Toni Walker, D-New Haven, who is co-chairwoman of the appropriations committee, he agreed to present it Tuesday. Ojakian was joined by researchers from Emsi, the Idaho-based global analyst who did the study.

“Since the budget does come out tomorrow, I guess we get a couple of bites of the apple, so it’s not a bad thing,” said Ojakian, who will be presenting the system’s budget to lawmakers later in the legislative session.

With state funding on the decline in recent years and enrollment dropping, the CSCU system — which includes the state’s four regional universities and 12 community colleges — has been in dire financial straits and is currently facing a potential shortfall as high as $57 million.

While its leaders have been exploring various ways to make it more financially viable, including a controversial consolidation plan, there are concerns about the level of state funding Lamont will propose in his first budget, as well as uncertainty about state bonding for CSCU capital projects. Lamont pledged last week to put Connecticut on a “debt diet” that could drain significant resources from municipal school construction and capital projects at state universities.

Ojakian told legislators he knew that the CSCU system delivers “real value to our state … but we needed an analysis, we needed numbers. We needed to know exactly what the return on investment looked like from an economic and financial perspective.”

The $85,000 study shows that during the 2016-2017 fiscal year, the net impact of CSCU former students currently employed in the state was  $9.9 billion, and that those same students will receive $7 billion in increased earnings over their working lives. That’s a return of $6.60 for every dollar students invest in their education, the report says.

In addition, the report found that for every dollar of public money invested in CSCU, taxpayers will receive $3.80 in return over the course of the students’ working lives.

Hannah Ruffridge, one of the Emsi economists, said the return on investments for students is a little higher than average compared to the other states, while the return to taxpayers is about average.

Other findings: research at CSCU generated $5.3 million in added income for the Connecticut economy in 2016-17, and visitors’ spending connected to the universities and colleges added about $5.6 million.

Legislators who are strong proponents of higher education said after the presentation that they hope it will persuade other lawmakers to invest in the state’s colleges and universities.

“I think higher education over the past few years has been vulnerable,” said Rep. Gregg Haddad, D-Mansfield and co-chairman of the legislature’s higher education committee. “They are viewed as a system that has alternative revenue sources besides the state and I think that many of my colleagues think of it as an easy place to make cuts.”

Haddad added that he thinks the turmoil within the CSCU system over the last eight years has made it all the more vulnerable. “It’s had like four leaders. They’ve not been able to put together a vision for their institutions the way that UConn has.”

He’s hoping that the study will focus attention on the return on investment. “Maybe we can convince my colleagues that we should be investing more in higher education, not less as a result of that,” he said.

Rep. Maria Horn, D-Salisbury, said she hopes the study will help to protect the state’s investment in higher education. “There’s no growth without investing in education,” she said.

Rep. Noreen Kokoruda, R-Madison said she was a little surprised at the high expense of the report, but said it provided “a lot of good information. I’m aware of how important our universities are to our economy.”

She said the report “verifies what a lot of us thought, what really our universities bring back to us.”

Ojakian said after the forum that he thinks the study “is powerful. I think it provides a new look to the value we provide and I’m hoping it will resonate when it’s time to talk appropriations.”

He said the governor’s budget announcement, scheduled for Wednesday morning “is the beginning of the conversations.”