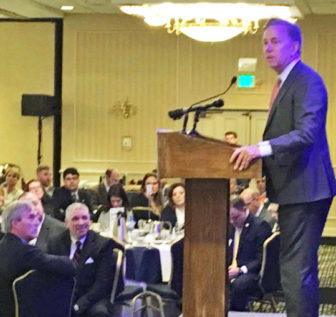 It also would make it difficult in 2020 for Lamont’s fellow Democrats in the legislature to obtain borrowing for small, community-based projects — labeled “pork-barrel spending” by critics — as they run for re-election.

The new governor also warned Tuesday that his first budget proposal, due out in eight days, would not shrink spending as much as he’d hoped, conceding the state’s huge pension and other, related debt is a larger problem than he anticipated.

“It’s not going to make me Mr. Popular. I’m going to have to say no an awful lot,” Lamont told about 250 business leaders and legislators gathered at the Wyndham Southbury hotel for the Waterbury Regional Chamber’s annual legislative summit.

Between 2012 and 2019, the state issued an average of $1.59 billion annually in general obligation bonds. [G.O. bonds are the principal means used to finance capital projects and are repaid with resources from the budget’s general fund, which receives most tax and fee receipts.]

Lamont’s proposed will cap G.O. borrowing at $960 million per year. That is about 50 percent of the new $1.9 billion G.O. bonding cap that legislators from both parties approved in late 2017.

The majority of that $1.59 billion went toward education projects, either to build or renovate local schools or to construct dormitories, classrooms, research labs, and other facilities at the University of Connecticut, the state universities and the community colleges.

For more than two decades Connecticut governors and legislatures have chiefly utilized the state’s credit card to invest in this area.

Lamont said this practice will not end — but things will be different.

“There will be some screaming and we don’t have a choice,” the governor said, adding he expects his “debt diet” would reduce the debt service line items in the state budget by about $50 million per year. “We cannot keep paying those accelerating fixed costs.” 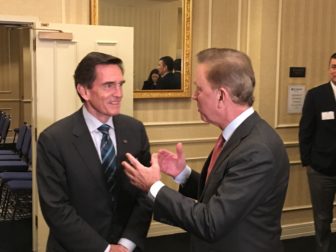 Lamont said “we’re going to make sure we continue to do schools, but we’re going to be selective,” adding he expects regional school projects that serve multiple communities would receive high priority for state funding.

Gara noted certain key grant programs for towns also have been on the decline and that if state bonding for local school construction slips as well, it would intensify pressure on local taxpayers.

The PILOT (Payment In Lieu Of Taxes) grant, which reimburses communities for a portion of the local tax receipts they lose because certain state and nonprofit properties are tax-exempt, has been on the decline for nearly two decades. Lawmakers also suspended a bulk of a sales-tax-revenue-sharing program with cities and towns just a few years after its enactment.

“We’re hopeful we can work with the governor’s office,” Gara added.

The Board of Regents for Higher Education is preparing to ask Lamont and legislators later this year to launch a new capital program for state universities and community colleges that starts July 1. Lamont said Tuesday he would not abandon investing in higher education, but that tough choices must be made.

“We’ve just got to prioritize,” he said. “We’ve put a lot of money into our flagship universities and that’s important. Let’s digest what we’ve done and give us a few years to stabilize our fiscal situation. … We’re not going to rubber-stamp everybody’s bonding requests. I think we’ve done that for a while and that got us in trouble.” 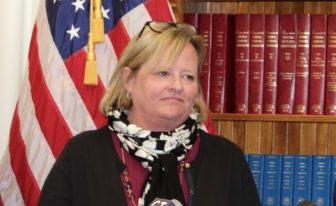 State finances, unless adjusted, are on pace to run $1.5 billion in deficit next fiscal year, and the potential shortfall reaches $2 billion in 2020-21. Lamont’s first budget must include plans to avert both deficits.

“We have engaged in productive conversations with Governor Lamont and his administration and appreciate his commitment to fiscal stability,” said Leigh Appleby, spokesman for the Board of Regents for Higher Education, which oversees the state university and community college systems.”We will continue to work closely to ensure the capital needs of our state colleges and universities are met.”

“UConn has been in constant discussion with the Governor’s office and OPM (Office of Policy and Management) and respects the fiscal challenges they face in creating the new budget,” University of Connecticut spokeswoman Stephanie Reitz said. “The university will work prudently with whatever amount is ultimately allocated for its capital projects.”

Lamont’s proposal does not apply to the Special Tax Obligation bonds which are issued to support transportation projects. This borrowing is repaid using the resources of the budget’s Special Transportation Fund, which is supported largely with fuel tax receipts and certain sales tax revenues and specialized fees.

But it would apply to the community-based projects legislators routinely seek every two years when they run for re-election. Lamont’s fellow Democrats, who hold majorities in the House and Senate, are expected to seek considerable state bonding in 2020 to assist their districts.

Though this practice is nothing new, Republican legislators frequently charged that Lamont’s predecessor, Gov. Dannel P. Malloy was far too indulgent in this area.

“Governor Lamont’s comments calling for a ‘debt diet’ are encouraging and long overdue,” said Senate Minority Leader Len Fasano, R-North Haven. “State bonding should only be used for essential functions of government and long term investments that add value to our state. Unfortunately, under the previous administration, Connecticut drifted away from that understanding. … I look forward to continuing this important conversation about how we can invest in Connecticut’s future at the same time we work to better control borrowing and reduce debt.”

Is Lamont prepared to be as stringent with borrowing in the 2020 elections as he wants to be this year?

Though Lamont never directly named Malloy in his remarks, the new governor said his review of state finances left him stunned at the recent surge in state borrowing.

“We’ve been on a bonding binge,” Lamont said, adding that “it’s absolutely unsupportable.”

Connecticut routinely ranks among the most indebted states per capita in the nation when it comes to bonded debt. It also outranks most other states in another form of debt — unfunded pension and retirement healthcare obligations.

And Lamont, who took office just one month ago, admitted he underestimated the “fixed cost” problem somewhat.

“I guess the other thing that surprised me a little bit is the scale of the fiscal crisis,” he said. “Maybe I thought that this was an iceberg that was a little over the horizon.”

In actuality, the governor continued, it’s an immediate problem “we’ve got to hit it head-on, right now.”

Connecticut’s payments on bonded debt and its annual contributions to pensions and other retirement programs consumed about 10 percent of the budgets’ General Fund two decades ago. Now they eat up about 30 percent.

Lamont said that his new budget would prioritize economic development and new investments in state technology, both of which he hopes would help to stabilize state finances over the long haul.