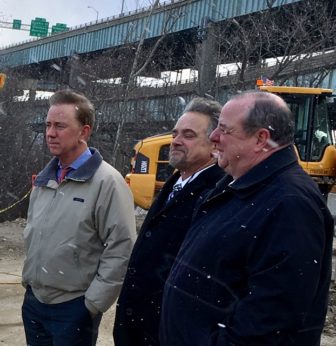 Waterbury — Gusty winds peppered Gov. Ned Lamont with dust and occasional snow flurries Monday as he stood beneath the “mixmaster,” the outmoded I-84 and Route 8 interchange undergoing a $152.9 million rehabilitation that will buy Connecticut time — putting off a far more expensive and disruptive replacement for another 25 years.

Looming above him like a prehistoric, if badly rusting, octopus, the mixmaster provided a telegenic backdrop for the easiest part of Lamont’s campaign to win approval of electronic highway tolls: Demonstrating how desperate is the need for the modernization of an interstate highway system conceived in the 1950s.

The harder part is answering the many questions that so far have stymied the new administration, among them: Where precisely would the overhead tolling gantries go up? What would the tolls costs local commuters? How much of a discount could the state offer locals without provoking a court challenge from the interstate trucking industry?

No state has attempted what Connecticut is now in the early stages of promoting: Devising a plan to install tolling on existing highways throughout the state, as opposed to placing tolls on a single road, bridge or tunnel.

“I think this is new territory for all of us,” said Cynthia L. Essenmacher, the tolling program manager at the Federal Highway Administration’s Center for Innovative Finance Support.

Retro-fitting an old interstate highway system with tolls is a complex undertaking, especially when most of the system was constructed with federal funds. The Lamont administration would like to install tolls on its three major interstates: 84, 91 and 95, plus the cars-only Merritt Parkway.

Essenmacher said in a telephone interview that Connecticut is not the only state exploring using electronic tolls to finance the reconstruction, modernization or expansion of highways on a regional scale, but none has come forward with a detailed, statewide plan for review by the federal government.

Federal law generally prohibits adding tolls to existing interstate highways, but Connecticut is one of 13 states in the Federal Highway Administration’s “Value Pricing Pilot Program,” which requires congestion pricing to encourage commuters to drive at off-peak times. Federal law also allows tolls to pay for the reconstruction of highways.

“Connecticut has not determined where it would seek federal tolling authority on their projects,” Essenmacher said. “It remains to be seen how exactly the tolling scheme would be played out under federal law.”

“I think this is new territory for all of us. It remains to be seen how exactly the tolling scheme would be played out under federal law.”

Based on Lamont’s comments Monday, Connecticut has considerable work to do.

His predecessor, Gov. Dannel P. Malloy, arranged for the Bond Commission to approve $10 million in planning funds for a tolling system, but Lamont has yet to sign off on going ahead with the expenditure and seems disinclined to do so until the legislature signals its supports for tolls.

Lamont has presented lawmakers with two options: electronic tolling on all motor vehicles or just trucks, as he proposed during the campaign. But the first option clearly is Lamont’s choice, as his administration now concedes that trucks-only tolls would raise too little revenue to make a difference and would be vulnerable to legal challenge.

“We’re going to lay out these different options to the legislature,” Lamont said Monday. “Once we get a green light on how we want to proceed, then we’re going to put in place the study we need to tell us exactly how we roll this out and, working with the legislature, figure out what is a reasonable way to price it and what it looks like.”

There is a chicken-and-egg aspect to the tolls issue: Lamont wants legislative endorsement to spend more money, but some legislators want more details that could require further study.

CDM Smith, a consultant for the state Department of Transportation, produced an evaluation last year of various tolling options for a system far more extensive than Lamont now wants lawmakers to consider. In addition to the Merritt and interstates 84, 91 and 95, that evaluation assumed tolls on Routes, 2, 8 and 9, the state’s busiest highways, and secondary intestates like 291, 395 and 691.

Senate Minority Leader Len Fasano, R-North Haven, said the Smith study is of limited use, given that Lamont’s proposal is different than the potential system evaluated by the consultant. He wants the governor to consider a Republican infrastructure plan that would rely on the state’s existing borrowing capacity, but set transportation as a priority.

But Fasano, as well as the construction industry, has criticized Lamont’s budget proposal for diverting some spending from transportation in the near-term, while holding out the promise of as much as $800 million in annual tolling revenue, beginning no earlier than 2023. Lamont was unable to say Monday what projects might be delayed due to the near-term cut.

“We’ve got to get this transportation system moving. We cannot get growing again until we get Connecticut moving again.”

The mixmaster project began in June, funded by previously allocated bonding. With the design costs included, the project will cost about $200 million. It is scheduled to be completed in September 2022. By then, the issue of highway tolls presumably will be long resolved, and Lamont will be in the final months of a re-election campaign or watching a fight among would-be successors.

Waterbury Mayor Neil O’Leary and two local legislators, Reps. Ron Napoli and Geraldo Reyes Jr., and Don Shubert, the head of a construction trade group, joined Lamont on Monday to promote transportation spending and tolls as vital to economic growth in Connecticut. O’Leary said a recently completed widening of I-84 already has eased congestion and raised property values of the city’s east side.

“We’ve got to get this transportation system moving,” Lamont said. “We cannot get growing again until we get Connecticut moving again.”

On Tuesday, Lamont will hold a press conference at the mile-long Gold Star Memorial Bridge, which carries 106,000 vehicles every day on I-95 across the Thames River between Groton and New London. He is to be accompanied by local mayors and Shubert, the president of the Connecticut Construction Industry Association.

Shubert applauds Lamont’s call for tolls, but is opposed to elements of the governor’s proposed “debt diet” that could postpone hundreds of millions of dollars in potential borrowing for transportation to help solve  larger problems in Connecticut’s finances.

“I think scaling back right now would be catastrophic,” Shubert says.

The governor, a Democrat, invoked an unlikely ally, the Trump administration, in his call for tolls. Lamont said Vice President Mike Pence encouraged governors to think about transportation when he addressed the National Governors Association over the weekend.

“He brought up the fact that the number one priority of this administration is get an infrastructure bill passed, and passed in this session right now — nothing more important, Republicans and Democrats, labor and business, keep our folks working, get our states moving again,” Lamont said.  “I think that is going to happen and when that happens I want to make sure Connecticut is at the front of the line.”