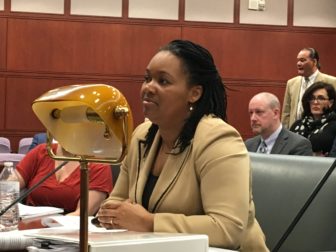 Republican legislators charged the new Democratic governor with straying too far from his campaign promises.

McCaw countered that Lamont wants to end Connecticut’s cycle of deficits, and said legislators have a bad habit of promising programs and tax cuts in future years — with no plan for how to pay for them.

Lamont, who said during the campaign that he would support tolls only on trucks, not only offered an option last week to toll all vehicles, but also argued that the trucks-only option doesn’t work financially.

At the same time, he also proposed canceling nearly $270 million in vehicle sales tax receipts pledged to the transportation program over the next to years.

“How is the governor justifying that with what was passed at the polls?” asked Rep. Chris Davis of Ellington, ranking House Republican on the finance panel.

Davis was referring to a new constitutional amendment ratified by nearly 90 percent of voters last November that creates a legal “lockbox” to prevent transportation revenues from being used for other purposes.

Lamont’s recommendation to keep the car sales tax receipts in the General Fund is legally permissible. The lockbox rules wouldn’t apply to this sales tax transfer until July 1, when the new fiscal year begins.

But Davis also questioned whether this violates the spirit of the amendment, if not the letter of the law.

This proposal of the governor is “essentially making it meaningless, or certainly not achieving what was proposed and passed by the people of Connecticut,” he said. 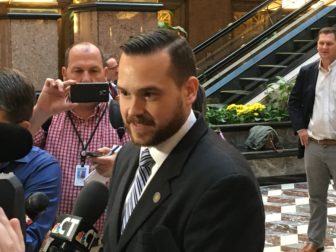 McCaw responded that unless the legislature acts, the state will face a budget deficit of $3.7 billion  over the next two fiscal years. And part of that problem, she added, was caused by prior legislatures promising transfers to the transportation program — with no plans to “backfill” the hole it creates in the General Fund.

“The legislature passes laws on a regular basis that make future promises,” she said, adding if there is no plan to pay for these promises and keep the budget balanced, the governor “finds that to be problematic.”

Lamont “preferred not to pick winners and losers,” McCaw said, adding that a more equal sales tax base should strengthen Connecticut’s economy in the long run.

But Rep. Holly Cheeseman, R-East Lyme, balked at proposals to end the exemption for winter boat storage and repairs, predicting it would lead Connecticut boaters to Rhode Island next winter.

“The loser here seems to be the state of Connecticut and the individual boat owners,” Cheeseman said.

“It just seems counterproductive to the message we are trying to send to the general public, that we are trying to get our fiscal house in order and we don’t want you to leave the state of Connecticut,” Martin said.

Davis also questioned why Lamont didn’t follow through on a campaign pledge to reduce the state’s capital stock tax. Also known as the capital base component of the corporation tax, it is a tax on a business’s net worth or capital holdings.  Connecticut imposes the nation’s highest rate at 0.31 percent.

But McCaw said closing the projected deficit simply took top priority. “I think that the challenge was … to solve the $3.7 billion gap,” she said. “There has to be a shared sacrifice.”