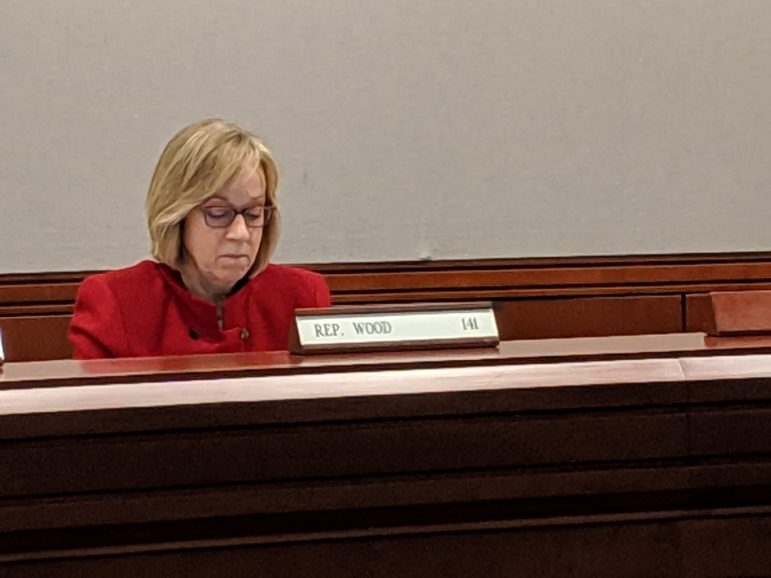 Rep. Terrie Wood, R-Darien, strongly supports a bill that would enable lawmakers to stop a plan to merge the state’s 12 community colleges.

Two bills that would give legislators greater oversight of the Connecticut State Colleges and University system were endorsed with unanimous support Thursday, including one that would enable lawmakers to stop plans to merge the state’s 12 community colleges into a single statewide institution.

“I think this is imperative that we do this this year,” said Rep. Terrie Wood, R-Darien, shortly before the vote was taken in the Higher Education Committee on Senate Bill 749.  “This community college consolidation — the process has not been transparent. I don’t believe the numbers add up. We just need more accountability and more understanding of it.”

Sen. Mae Flexer, D-Killingly, and a vice-chairwoman of the committee, said she hopes to see the bill, which has been sent to the floor of the Senate, get through the General Assembly so that legislators are empowered to stop the college merger plan backed by CSCU President Mark Ojakian, who also heads the Board of Regents for Higher Education.

“We are at risk of losing many of the community-based strengths of our community system with the creation of one single institution,” Flexer said. “When the Board of Regents was created, we were assured we were going to have 12 independent community colleges and four state universities. That is no longer the case and the legislature needs to be the voice of the people to ensure they have a role in this discussion.”

A second bill, House Bill 7254, unanimously approved by the committee Thursday, says the president of the Board of Regents must make quarterly reports to the higher education committee on the status of  “Students First,” as the college consolidation plan is called.

“Twelve campuses run by a bureaucrat in Hartford is not the same. It’s not keeping the community in our community college system.”

As the law stands now, the Board of Regents, the governing board for CSCU system, makes the decision on whether to close or merge institutions. With the backing of Ojakian, the board has decided to merge the state’s 12 community college in an attempt to bolster the system’s ailing finances.

Ojakian has estimated that the plan will save $23 million annually when the consolidation is complete and he hopes to invest any savings into services for students that will strengthen retention and graduation rates.

Last year, the accrediting agency for the CSCU institutions, the New England Commission of Higher Education, turned down Ojakian’s bid to consolidate the 12 colleges, but Ojakian said he has been working closely with NECHE to ensure a better chance of success when he submits the plan again. His hope is to receive approval from NECHE in time to completely consolidate  the colleges in 2023.

The Senate bill would require that any proposed merger or closing of a CSCU institution must be approved by a majority vote in both chambers of the General Assembly, but to reject it would require only a majority vote of either chamber. The vote must be taken “not later then one year” after receiving notice by the Board, the bill says, adding that if the General Assembly fails to act, the recommended merger or closing “shall be deemed acceptable.”

“You know I’ve never said I want to close campuses. I’m committed to not closing campuses.”

Ojakian, who opposed the bills approved by the committee Thursday, said the system must be restructured if it is to remain solvent.

“I believe that if you have a board of regents or a board of trustees that is mostly appointed by the governor that you should give that board the authority to make those kinds of decisions,” Ojakian said Thursday, shortly after the committee vote. “While I respect the legislative process, I think if you have legislators approving or rejecting closures or mergers then you are going to inject politics into those decisions even more than is being done now.”

If politics enter into the decisions about which colleges remain open or closed, he said,  “the students would be the ones to suffer in the end.”

“You know I’ve never said I want to close campuses. I’m committed to not closing campuses,” Ojakian said. His plan preserves all 12 campuses, but centralizes administration.

But if a successor attempted to close a campus, Ojakian said he thinks it’s the colleges in the more rural areas that may be at greater risk because they have a smaller delegation in the legislature.

“You clearly see legislators, in a desire to protect their own institutions, basically arguing that we should close another institution,” said Ojakian.

“I think President Ojakian underestimates the strength of the voice of northeastern Connecticut,” said Flexer, who is from the northeast corner of the state and graduated from Quinebaug Valley Community College. “Twelve campuses run by a bureaucrat in Hartford is not the same. It’s not keeping the community in our community college system.”

Rep. Gregg Haddad, D-Mansfield, and co-chairman of the higher education committee is another strong proponent of the bill.

“We’re the funding agency for the system and I think that’s an expectation here that we want an understanding about what it is that we are providing money for,” said Haddad. “I think it’s not surprising that legislators would want a say in something as sweeping as what he’s proposing.”