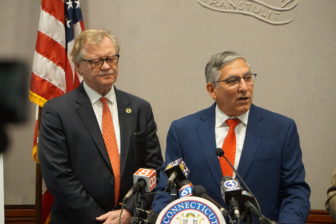 The gulf between Gov. Ned Lamont and Republican legislators on tolls grew even wider Thursday.

“I say no tolls — period,” Fasano said during an early afternoon press conference, adding he believes residents staunchly oppose “allowing another taxing beast into our system. … Now you’ve got this beast, which is the tolls monster.”

Connecticut chiefly finances transportation upgrades using a combination of state and federal dollars. Most of the state money is borrowing through the sales of transportation bonds on Wall Street. Those bonds are repaid using using fuel tax receipts and other revenues from the budget’s Special Transportation Fund.

But analysts say Connecticut has invested too lightly in transportation for decades, and the $750 million-to-$800 million in state bonding it currently issues annually needs to grow.

Lamont has proposed installing electronic tolls, which would boost transportation fund revenues by nearly 40 percent by 2023 or 2024 — and give Connecticut the revenues to support a more aggressive bonding program.

The administration also estimates as much as 40 percent of toll receipts would be paid by out of state motorists.

State funds for transportation construction work would swell from about $800 million per year to $1.4 billion annually under the GOP’s “Prioritize Progress” plan. In contrast, Lamont would essentially keep resources for transportation work constant over the next four or five years until toll receipts arrive.

And Fasano distributed a Department of Transportation analyst’s memo —  first disclosed by the CT Mirror on Feb. 27 — that warns the administration’s plan would be too lean over the next four to five years.

The governor’s plan “would have significant impacts on our capital program, severely constricting the number of new projects that advance in the current, and future years,” the DOT wrote.

But some transportation advocates have said the Democratic governor and Republican legislators’ respective plans could easily be merged.

For example, some non-transportation bonds could be redirected to ramp up transportation work over the next few years — and then phased out as toll receipts arrive. 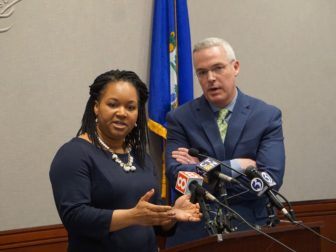 The governor’s budget director and chief of staff, Melissa McCaw and Ryan Drajewicz.

But while Fasano said he couldn’t consider any compromise if it involved tolls, Lamont’s chief of staff, Ryan Drajewicz, and budget director, Melissa McCaw, said there is room for middle ground.

“There is a path through this,” said Drajewicz, who attended Fasano’s press conference and addressed reporters immediately afterward.

The key, McCaw said, is to develop a compromise built on honest, fiscal principles that allows for key strategic investments in transportation.

If Connecticut makes no changes to its transportation building program, or if it follows the GOP plan, the budget’s Special Transportation Fund is at risk of deficits by the mid-2020s and insolvency shortly thereafter, she said, adding it simply needs more resources over the long haul.

“If there’s no money to fund the debt service,” McCaw said, “that’s a problem.”

The administration is ready to look at any plan that brings long-term stability to state finances, including its transportation program, she said.

That plan also must make some attempt to restrain overall borrowing, administration officials said. Lamont proposed a “debt diet” in February, arguing that past administrations recommended far too much borrowing for non-transportation programs.