Toll revenue not due to arrive until 2023 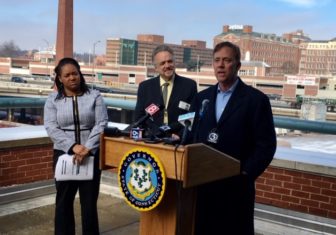 Gov. Ned Lamont’s struggle to sell Connecticut on tolls may hinge on one big question. (Hint: It isn’t, ‘Why did he drop his campaign pledge to only toll trucks?’)

Namely, which planned highway, bridge or rail projects can’t begin over the next four years under the governor’s budget proposal? It’s a question that transportation officials have already asked – and shared their concerns about with the governor’s office.

But why would any projects fall into limbo between now and the time major toll receipts start arriving in 2023?

First of all, the DOT planned to launch new projects aggressively in the early 2020s, after the marathon 2017 budget debate forced it to limit last year’s building program.

Secondly, Lamont wants to use big sales tax receipts pledged for transportation — about $850 million over the next four years — to solve shortfalls in other parts of the budget.

The CT Mirror asked DOT Commissioner Joseph Giulietti during a press conference with Lamont last week whether the governor’s budget would curtail significant numbers of new projects due to be launched over the next few years.

“We’ve looked at it,” Giulietti said. “I’m not at that point where I’m willing to go and say that is the case right now. We’re going through an evaluation on that.”

But what Giulietti didn’t say is that the DOT has already identified concerns, according to a February departmental analysis of the governor’s proposals obtained by the CT Mirror.

The governor’s plan “would have significant impacts on our capital program, severely constricting the number of new projects that advance in the current, and future years,” the DOT wrote.

Projects on the cutting block

Projects “most at risk” over the next four years include any initiatives funded exclusively with state dollars. These include the “Fix-it-First” roadway and bridge programs launched under Gov. Dannel P. Malloy in response to stagnant federal transportation aid that has been falling in recent years. (Federal funds that once covered more than 70 percent of Connecticut’s transportation capital program now represent closer to one-third.)

The DOT also developed a list of 14 projects this month that have been advertised, but for which no contracts have yet been awarded. These “will be reviewed to determine whether they need to be delayed, pending a decision regarding a bonding cap,” the department wrote.

Included on that list are a planned upgrade to the Charter Oak Bridge interchange with northbound Interstate 91, platform improvements and a pedestrian bridge for the Clinton railroad station, numerous bridge rehabilitations, and a pavement preservation project.

The department also listed more than 80 other new projects which are scheduled to be advertised between February and December of this year.

New construction commitments planned over that period include tunnel improvements on Route 15 in Woodbridge, enhancements to Interstate 95 in Greenwich, and replacing the Rochambeau Bridge superstructure on Interstate 84 in Newtown.

“We are still working through all of these projects together with OPM (Office of Policy and Management) and nothing is  set in stone,” Giulietti said Wednesday morning. “But it does point to another critical example of why there needs to be a dedicated, consistent revenue stream — because while we don’t have one our infrastructure suffers and jobs are lost.”

No extra borrowing to bolster transportation

Lamont’s budget would affect transportation — in the short-term — very significantly.

First off, the governor would take away a big transportation funding option on which the DOT had been counting.

The state borrowed $800 million to support transportation last fiscal year and anticipates another $750 million this year — borrowing which, in turn, leverages more than $700 million dollars in matching federal grants.

But for the last two years, legislators also have said the transportation program — if necessary — could tap another $250 million annually from a different borrowing program, one used chiefly for school and other education projects.

Lamont’s budget would keep regular transportation borrowing flat, at around the $800 million mark for each of the next two years. But his budget also would remove the option to borrow an extra $250 million, an option the DOT was counting on.

Projects underway are safe – but what about the rest?

The Lamont administration said this week all projects already underway will be fine. As for those that the DOT wants to start over the next four years, well, they will be evaluated.

The DOT referred any questions this week about the capital program to the governor’s office.

If the administration decides more borrowing needs to be approved to launch new projects, it will be —  provided the Special Transportation Fund has enough resources to cover the added debt payments, according to Lamont spokeswoman Maribel La Luz.

But the problem with that plan is Lamont also wants to tap resources earmarked for the STF to close a deficit in the rest of the budget.

Current law calls for the STF to gain an extra $850 million from the sales tax over the next four years combined. Lamont wants to keep these dollars in the General Fund to help avert major projected deficits. The administration says state finances, unless adjusted, will run $3.7 billion in the red over the next two years.

Lamont recommended transferring $162 million from the sales tax. The transportion fund also would keep an extra $77 million over the next four years if unions grant the concessions the governor requested.

In other words, the transportation fund would grow much more slowly under Lamont’s proposal than scheduled under current law — at least until 2023, when more than $740 million per year from tolls arrives.

DOT has big construction plans for the next four years

State transportation officials clearly had a different vision for the next four years.

The DOT, like many state agencies, had to water down its spending plans in 2017 when legislators battled for nine months before adopting a new state budget. Plans for $2 billion in capital spending shrank to $1.7 billion. These totals involve funds set aside from past state borrowing as well as accumulated federal grants.

This year the department had hoped to catch up. According to its latest long-range capital plan, released in mid-November, capital spending ideally should reach $2.6 billion before this fiscal year ends in June.

But because Connecticut has not invested sufficiently in transportation for decades, the goal is to keep capital spending above $2 billion for years to come. The DOT’s long-range plan calls for an average of $2.36 billion over the next four years.

The Lamont administration counters that any capital spending goals are unrealistic if they rely on an overall state budget system that is out of balance.

Still, if neither state borrowing nor federal aid is growing significantly, it will be hard to hit those targets. And it’s not just the department that has concerns.

Construction companies and trade unions also are worried Lamont’s budget could represent a temporary step back.

“I think scaling back right now would be catastrophic,” Donald Shubert, president of the Connecticut Construction Industry Association, said earlier this month. Shubert also praised Lamont for proposing tolls on all vehicles.

David Roche, president of the Connecticut State Building Trades Council, also said the state can’t afford to backtrack — even for a few years — on maintaining an aging, overcrowded transportation network.

“I really don’t believe we can have less money going into transportation,” even for a few years, Roche said.

{Updated at 8:30 a.m., Wednesday with additional comments from Giulietti.}