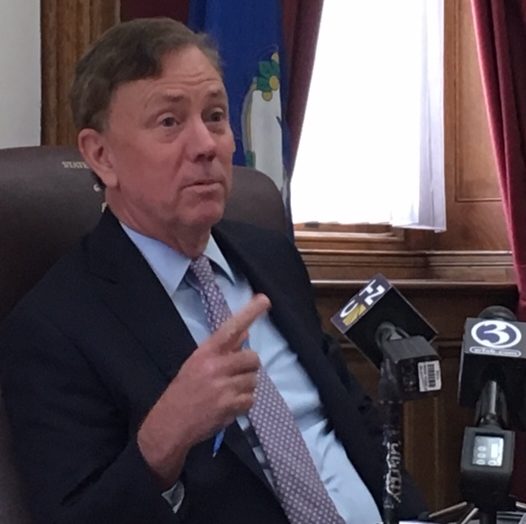 “I’m focused on Connecticut,” said Lamont, a Democrat who had happened to be meeting with reporters in his State Capitol office while Barr outlined Mueller’s findings in Washington.

Lamont’s predecessor, Dannel P. Malloy, was a leader of the Democratic Governors Association and a partisan who never shied from crossing swords with Republicans in defense of Barack Obama, as did he famously did outside the White House after a national governors’ meeting in 2014, or in criticism of Trump and Vice President Mike Pence.

The new governor refused to engage on the Mueller report, other than lightly predicting how it would feed partisan politics and the cable-television maw.

Lamont’s style is more affable than aggressive, and he says he is optimistic that the state will benefit from one of the few issues on which the president and congressional Democrats have expressed common cause: Trump’s proposal to spend $200 billion on infrastructure, leaving to Congress the details on where the money should go.

Lamont, who recently met with Transportation Secretary Elaine Chao, said a blue state like Connecticut would not be shut out.

On his 100th day in office, Lamont kept his focus on his agenda during a 40-minute give-and-take with reporters, particularly on his plan to provide a reliable funding source for transportation infrastructure by returning tolls to Connecticut after an absence of 35 years.

The Democratic governor has struggled with Republicans to frame the debate about tolls, but Lamont declined to say if he made missteps since making the proposal in February, reversing a campaign pledge to toll-only trucks.The GOP has said tolls are unnecessary if the state redirects more of its existing general borrowing to transportation, a plan Lamont says is unworkable.

“Right now, this gridlock is killing the state of Connecticut,” Lamont said. “I’ve got to make that case to the people of the state of Connecticut, how important this is. It’s not easy. I’m asking folks to sacrifice a little bit so their kids don’t have to pay the cost, do it up front and do it in a responsible way and get this state moving again.”

Lamont will be one of the featured speakers Friday at a conference sponsored by the Regional Plan Association in New York City, where he is expected to talk about infrastructure investment as a generator of economic growth for Connecticut. The conference theme is  “Investing in People and Places.”

The governor has proposed tolls on the Wilbur Cross and Merritt Parkways portions of Route 15, plus Interstates 84, 91 and 95.

Connecticut is one of the states permitted to experiment with tolls aimed at reducing congestion with variable pricing, based on peak and an off-peak travel. The Federal Highway Administration, however, will not sign off on a detailed blueprint until the legislature approved enabling legislation.

Unresolved is how much detail will be available to the legislature if and when a tolling bill comes to a vote. The governor’s staff says the administration will provide more details before a vote, even though the governor said lawmakers should be able to make a decision now.

“I think they know exactly what things are looking like. They know more or less how many gantries we’re going to have, not to exceed 50. They know it’s not going to exceed those four highways we’ve talked about,” Lamont said. “I just tell anybody that needs more information or wants to weigh in, please come to this office and see me.”