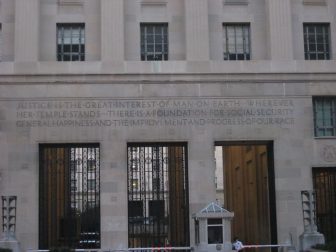 Washington – The state of Connecticut and dozens of towns are mired in a legal standoff with the U.S. Justice Department over millions of dollars in policing grants the Trump administration is withholding from what it considers  “sanctuary cities.”

The legal fight is expected to drag on for some time, perhaps reaching the Supreme Court. In the meantime, police departments across the nation have been denied public safety money they have counted upon for decades.

In 2017, the Justice Department imposed new conditions on states and municipalities that applied for public safety grants known as the Edward Byrne Memorial Justice Assistance Grants, or Byrne JAG grants.

That touched off an avalanche of lawsuits against the Justice Department.

The state joined a lawsuit brought by New York, New Jersey, Washington state, Virginia and Massachusetts that called the imposition of the conditions “arbitrary and capricious.”

Norwalk, East Hartford, Hartford, Bridgeport, Stamford, Waterbury and New Haven sued the Justice Department separately as part of a lawsuit led by the city of Evanston, Ill, and the U.S. Conference of Mayors.

The plaintiffs all argue that the Trump administration’s actions violate federal law and put communities at risk because they can no longer rely on these public safety grants. The lawsuits also say the conditions are unconstitutional since, in authorizing the grants, Congress has not placed those conditions on Byrne grants.

The Justice Department did not respond to several requests for comment.

The Trump administration required applicants to certify they allow access to prisons by immigration agents, provide advance notice when prisoners wanted on an immigration detainer are being released, and certify compliance with a federal law, known as Section 1373 of the Aliens and Nationality Act, that says states and localities can’t bar officials from communicating with the immigration authorities about citizenship status.

Connecticut in 2013 passed the “Trust Act,” which allows state and local law enforcement agencies to ignore a federal “detainer” — a request to hold an undocumented resident for immigration officials — if he or she hasn’t committed a serious felony. The state also has a policy of encouraging law enforcement officials to refrain from asking about the immigration status of people they come in contact with.

Other Connecticut towns, including Hartford and New Haven, have gone further in their immigrant-friendly policies, bringing on the wrath of the Trump administration, which has dubbed them “sanctuary cities.”

Earlier this month, President Donald Trump threatened to bus migrants detained along the U.S.-Mexico border to these “sanctuary cities.”

“Given the continuing dearth of a lucid federal immigration policy, and for as long as I’m mayor, New Haven will continue its open-arms tradition for those fleeing oppression in other countries and for those who seek a better life here,” Harp said.

Filling a gap in police work

The Byrne grant program distributes about $300 million in grants to cities and states every year, based largely on a formula which gives larger jurisdictions more money. Connecticut distributes its Byrne grant money to towns that need it, while larger cities in the state make their own, separate applications.

Responding to the blizzard of lawsuits, several federal judges issued injunctions last year against the new conditions and the Justice Department was required to release the money for the 2017 Byrne grants.

It plans to use the money to bolster narcotics enforcement, substance abuse treatment services, and opioid intervention projects at local police departments.

“They help to fill in the gap in police departments who are responding to upticks in crime,” Pelta said.

Despite defeats in several federal courts, the Justice Department did not give up on its attempt to tie federal policing funds to collaboration with federal immigration enforcement.

Last year, it added two new conditions to qualify for the grants. One requires grantees to certify “not to publicly disclose federal law enforcement information in an attempt to conceal, harbor, or shield certain individuals from detection.” The other requires grantees to answer a questionnaire regarding their policies on communication with federal immigration authorities.

Now the 2018 Byrne grant money is also embroiled in lawsuits. The Justice Department has appealed court decisions that mandated the release of the 2017 grants, and some say the cases will ultimately go to the Supreme Court.

“One never knows how far this will go,” Pelta said.