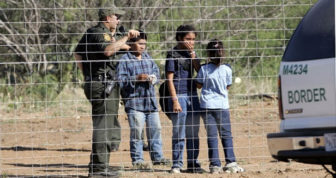 Washington – President Donald Trump on Monday repeated his threat to bus migrants to “sanctuary cities” like Hartford and New Haven as congressional Democrats launched yet another investigation into his administration – asking for all documents related to discussions of the controversial proposal.

The lawmakers are seeking emails and other documents related to discussion of the plan to send migrants who have been detained at the border – most of them seeking asylum – to jurisdictions that Trump says don’t fully cooperate with federal immigration policy.

“These reports are alarming,” the lawmakers wrote White House Chief of Staff Mick Mulvaney and Department of Homeland Security officials. “Not only does the administration lack the legal authority to transfer detainees in this manner, it is shocking that the president and senior administration officials are even considering manipulating release decisions for purely political reasons.”

Connecticut and several cities in the state have immigrant-friendly policies. But the U.S. Department of Homeland Security has singled out Hartford and New Haven under its definition of “sanctuary cities.”

Those Connecticut cities fall under that definition because they don’t honor “detainers” or federal requests that local authorities hold incarcerated migrants for up to 48 hours after their scheduled release so they could be picked up by Immigration and Customs Enforcement (ICE) agents, or share certain information about detainees with federal authorities.

Hartford Mayor Luke Bronin and New Haven Mayor Toni Harp have joined other leaders of “sanctuary cities” in a defiant response to the president’s plan.

“Donald Trump labels all immigrants criminals, but we aren’t afraid of families seeking asylum and a better life, and if it would keep kids out of cages, we would do everything we could to help — just as we’ve welcomed thousands of refugees and asylum seekers decade after decade,” Bronin said.

Bronin also said “there are responsible ways to address the increase in migration at the southern border,” but Trump preferred to focus “on retaliating against his political opponents, and he doesn’t think twice about weaponizing women and children fleeing violence, poverty and instability.”

Harp, meanwhile, said “New Haven has a long, proud legacy as a welcoming, accepting community and embraces new residents no matter where they used to live.”

“Given the continuing dearth of a lucid federal immigration policy, and for as long as I’m mayor, New Haven will continue its open-arms tradition for those fleeing oppression in other countries and for those who seek a better life here,” she said.

While the White House initially tried to downplay the proposal, first reported by the Washington Post last week, on Monday Trump said he’s prepared to distribute migrants in the nation’s detention facilities that are filled to capacity to immigrant-friendly cities run mostly by Democrats.

“Those Illegal Immigrants who can no longer be legally held (Congress must fix the laws and loopholes) will be, subject to Homeland Security, given to Sanctuary Cities and States!” Trump tweeted.

Trump also tweeted “Congress should come back to D.C. now and FIX THE IMMIGRATION LAWS!”

Congress is on a two-week break for Easter and Passover.

Some immigration experts predict the administration would have difficulty defending in court a policy of sending immigrants to sanctuary cities and say it would be difficult, and expensive, to put into practice.

Besides drawing fire from Democrats the plan is also attack by conservatives who say it would run counter to the president’s promise to refrain from releasing undocumented migrants into communities, a policy they deride as “catch and release.”

U.S. Customs and Border Patrol says the number of migrants  fleeing violence and poverty and apprehended at the U.S.-Mexico border increased by 300 percent this fiscal year, challenging an already strained immigration system. ICE’s capacity to hold immigrants is limited — it has enough beds for about 50,000 people.

Most immigrants seeking asylum have no criminal record, according to Syracuse University’s TRAC database. But there are few alternatives to detention under the Trump administration’s “zero tolerance” policy, which does not allow migrants to be freed on parole pending their immigration hearings.