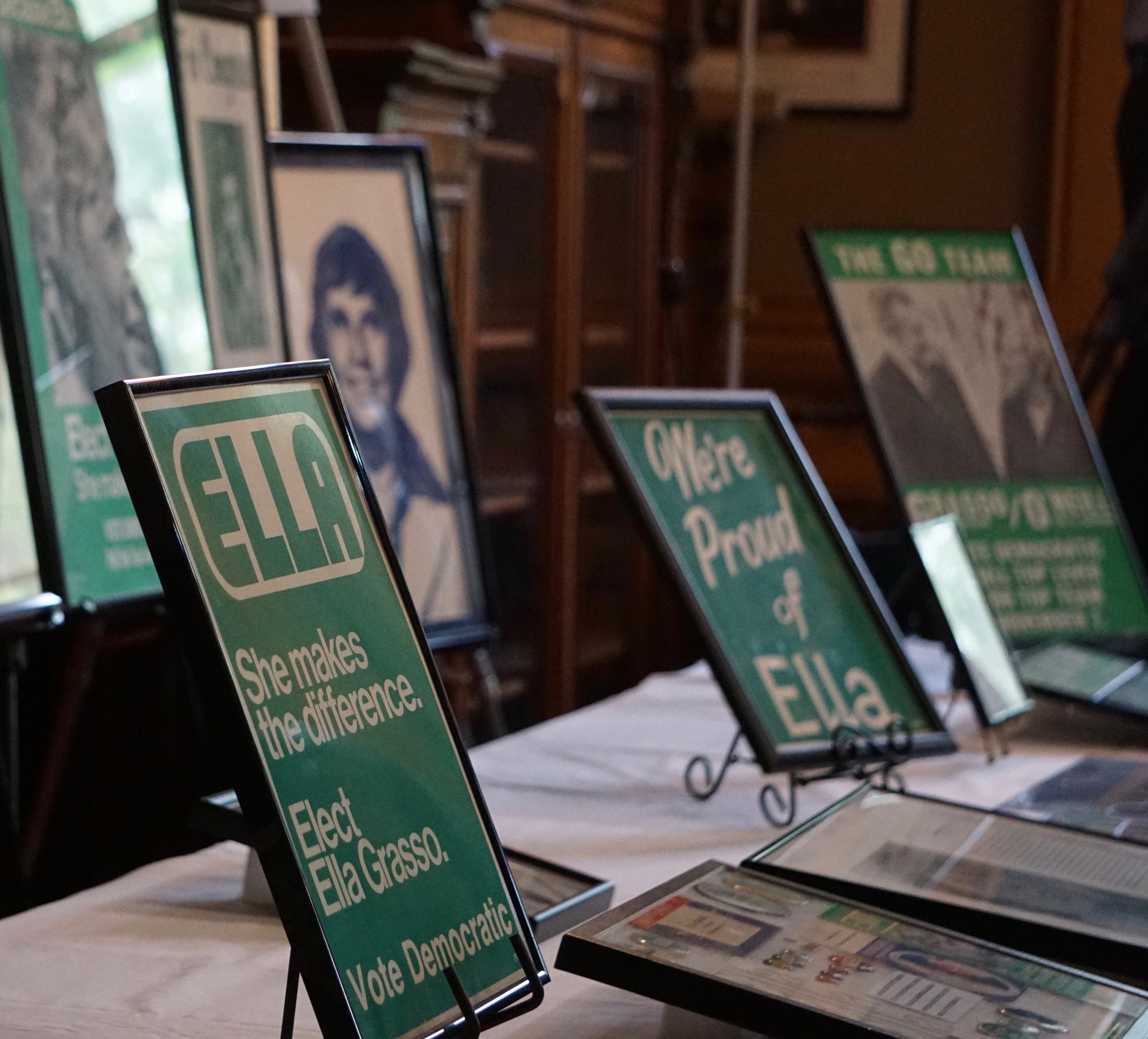 Neighbors, pols, relatives and former aides of Ella T. Grasso dotted the room. At a folding table in the back sat her old paper boy, Carl Schiessl, the kid who grew up to take her seat in the legislature. The former newsboy and state lawmaker left elective politics 20 years ago, a reminder of how quickly time passes and memories fade.

It was a modest party for Grasso on Friday, the 100th anniversary of her birth. Held in the Old Judiciary Room of the State Capitol, about half the attendees were from Windsor Locks, the factory town on the Connecticut River where her immigrant parents settled and she was born, three months after the end of World War I.

None of the governors who followed Grasso attended. Neither did the leaders of the General Assembly, the Democratic state chair or, for the most part, the latest generation of women to walk in her footsteps. The author of a Grasso biography, Lt. Gov. Susan Bysiewicz, presided, rightfully holding up Grasso as a trailblazer. 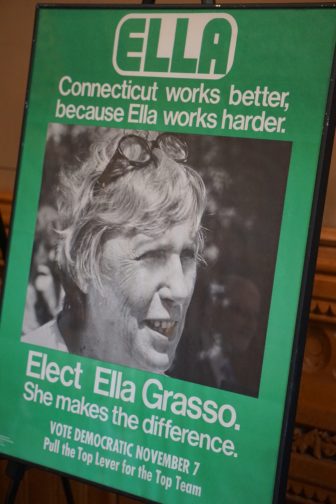 She was twice elected governor, resigning in her second term.

Grasso was the first woman elected governor of any state without following a spouse into office and only one of 13 women in Congress during her first term in Washington. But the trail she blazed has proven surprisingly hard to follow, even in Connecticut.

Bysiewicz read the current statistics, all  improvements from Grasso’s time, but still underwhelming: Today, nine of the 50 governors are women, 102 of 435 members of the U.S. House, 25 of 100 U.S. senators, and 27 percent of the Connecticut General Assembly.

“She was a woman ahead of her time,” said Susanne Grasso, her daughter.

Dying from ovarian cancer, Grasso resigned as governor on Dec. 31, 1980.

Grasso was a touchstone for women in politics — and reporters writing about the opportunities and challenges for them. Bysiewicz read aloud an answer she gave when asked about the prospect of her or any woman being elected to the White House.

“I will not be president, because I do not aspire be president,” Grasso said. “But I am sure that a woman will be president. When, I don’t know. It depends. I don’t think the woods are full of candidates.”

Hillary Clinton lost the presidential race in 2016. But by Bysiewicz’s count, six of the 22 Democrats looking at the Democratic nomination for 2020 are women.

Barbara B. Kennelly, a success as a member of the U.S. House and a failure as a candidate for governor, told the gathering there was much to celebrate in the life of Grasso, a protege of Kennelly’s father, John M. Bailey.

But later, she acknowledged seeing little to celebrate in the numbers recited by Bysiewicz.

“One hundred and two, woo hoo,” Kennelly said sarcastically of the number of women in the House, where Kennelly held significant leadership posts.

Kennelly ran for governor in 1998, becoming the first woman nominated for governor by the Democrats since Grasso. She lost to John G. Rowland, a Republican whose resignation in 2004 made Lt. Gov. M. Jodi Rell governor. Rell was elected to a full term in 2006. 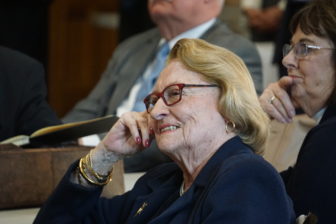 Bysiewicz explored a run for governor last year, opting instead to become Lamont’s running mate. She is now one of 15 women holding the office of lieutenant governor in the U.S.

Grasso was elected to the General Assembly in 1952, as secretary of the state in 1958, and to the U.S. House of Representatives in 1970 before winning her first gubernatorial race in the post-Watergate election of 1974, a good year to be a Democrat.

That same year, the nation’s oldest continuously published newspaper, The Hartford Courant, employed a woman, Irene Driscoll, for the first time as its State Capitol bureau chief. “Her Sex Still A Quiet Issue” was the headline over a story in which Driscoll archly noted that Republicans had printed bumper stickers asking if Connecticut really wanted a “governess.”

It didn’t. It wanted a governor, and it got one.

Educated at Mount Holyoke College, one of the prestigious “Seven Sisters” for women shut out of the Ivy League, Grasso played well in the men’s club of 50s and 60s politics, cussing with the best, seeing and seizing opportunities. Her status as a woman seeking the governor’s office was so novel that she won the endorsement of pro-choice Democrats, even though Grasso opposed abortion.

State Sen. John A. Kissel, R-Enfield, a lawyer who represents Windsor Locks and has long been the top Republican on the Judiciary Committee, said an overlooked element of Grasso’s legacy was her disregard for the seniority ladder that men had long climbed through the trial courts to the state Supreme Court.

In 1978, Grasso nominated Ellen Ash Peters, a Yale law professor, to the Supreme Court. Never again would a governor rigidly look at seniority as a qualification for the high court. Grasso’s successor, William A. O’Neill, would elevate Peters to chief justice.

At the back of the room Friday, there was sheet cake and political memorabilia, all of it branded as Ella.

“Ella. She makes a difference.”

On an aerial tour of the state after a crippling blizzard in 1978, Grasso saw one word cry for help carved in the snow: “E-L-L-A.” 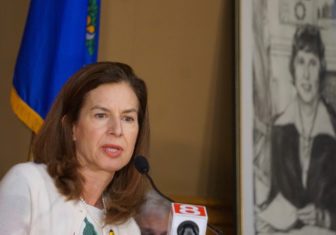 Lt. Gov. Susan Bysiewicz and a portrait of Ella Grasso.

One of the radio reporters in a trailing helicopter was Bernard Kavaler, who later became an aide to Lt. Gov. Joseph J. Fauliso, among others. When they landed, Kavaler coaxed Grasso over to a pay phone, the only way she could speak live to an audience on WPOP-AM, the all-news station that employed Kavaler.

Kavaler was in the audience Friday. So was Grasso’s old press secretary, Larrye deBear, and a few other former aides, and a large contingent from Windsor Locks. When Kissel asked how many were from Grasso’s hometown, hands shot up and Kissel smiled to see so many constituents.

U.S. Sen. Richard Blumenthal said he saw an audience composed of people from different places and different eras, all sharing memories of Grasso, some more colorful than others. He told a story about driving to work in the blizzard of 1978, disregarding Grasso’s order for everyone to stay off the highways.

“About noon time, the phone rang. And as you’ve probably heard, Ella Grasso was accustomed to making her own phone calls. She was on the other end of the line and proceeded to berate me,” Blumenthal said. Smiling broadly, he added, “In the strongest possible words. I’m not going to repeat.”

The audience laughed. Grasso’s public image was maternal, if forceful. Her family and staff knew she also could be blunt, funny and profane. And there was little she missed, during a snowstorm or during a legislative session — as her hometown legislator once learned.

“She had a great sense of humor, and I’m not sure everyone saw that,” said Con O’Leary, a state legislator from Windsor Locks during her tenure. Dryly, he added, “I had an opportunity.”

O’Leary, who also was a teacher, recounted how one of his students drafted a bill allowing bow hunting on Sundays. As a teachable moment, O’Leary filed it and watched it make its way to the House floor, only to learn the governor wanted the bill killed. But O’Leary had promised the student his vote, and he voted for the bill.

To O’Leary’s surprise, and somewhat to his dismay, the bill passed the House over the objections of his most important constituent.

“That was on a Wednesday,” said O’Leary, who would end his elective career as the state Senate majority leader. “On Saturday, it was Ella’s birthday.” The local Democrats threw a party for Grasso at the local Knights of Columbus hall. O’Leary met the governor, who exited her car and took O’Leary’s extended hand.

“With a very firm and steady grip, she pulled me very close until her lips were right near my ear,” O’Leary said. “And she said to me, ‘If I go walking on Sunday —’ ”

O’Leary paused again, waiting for the laughter to subside.

“ ‘I know who’s going to come and pull it out.’ Then she turned and walked into the Knights’ hall.”

O’Leary said he was left standing, his mouth agape. The audience roared.