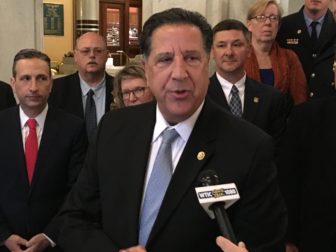 Peter Carozza, president of the Uniformed Professional Firefighters Association of Connecticut, discusses the compromise PTSD benefits bill at the Capitol

Legislative leaders unveiled a bipartisan proposal Monday to provide police and firefighters suffering with post traumatic stress disorder with up to one year of workers’ compensation coverage.

Joined also by union leaders and representatives of the Connecticut Conference of Municipalities, lawmakers predicted the compromise — which ends a six-year debate on stress benefits for first-responders — would be enacted before the 2019 session closes on June 5.

The agreement, which advocates hailed as a national model, also limits eligibility for benefits to those personnel who have experienced at least one of six specific traumatic events.

“Post-traumatic stress is a real injury that you can define and recognize and treat and get people back on the job,” said Sen. Cathy Osten, D-Sprague, who spearheaded the push to expand workers’ compensation coverage since the December 2012 shooting deaths of 26 children and staff at Sandy Hook Elementary School in Newtown.

Osten, who is a former prison guard supervisor and who still serves as Sprague’s first selectwoman, brought perspective from both sides in the benefits debate.

“The people who are not here are the people we hold in great regard,” Osten said, referring to police and firefighters who either took their own lives after witnessing a tragic event, or have suffered without treatment from PTSD and have never been able to return to the job.

Critics of the current workers’ compensation system have argued it largely provides mental health benefits to emergency personnel who are the direct victims of violence, and not necessarily to those who witness it in gory detail. At the same time, municipal leaders expressed fears that if modifications weren’t crafted properly, it could become a huge fiscal burden on local property taxpayers.

But advocates for cities and towns as well as for labor said Monday the compromise is one they can accept.

“I think it demonstrates the ability of labor and management to sit down and reach an agreement,” said Peter Carozza, president of the Uniformed Professional Firefighters Association of Connecticut, which has more than 4,0000 members.

New Britain Police Officer Jared Barsaleau, who is vice president of Local 1165 of the American Federation of State, County and Municipal Employees, said more officers died nationally from suicide in 2018 — for the third year in a row — than from any physical injury caused in the line of duty.

Joe DeLong, executive director of CCM, recalled how his organization was running commercials one year ago at this time trying to defeat a PTSD bill that did not reflect a compromise.

“We are truly committed to doing right the right way,” he said.

The compromise would authorize benefits to police or firefighters who are diagnosed with PTSD and who have experienced at least one of the six following qualifying events:

The benefit expansion would be available to police officers, firefighters — both professional and volunteer — and parole officers.

The compromise also would expand from 30 days to 180 days the evaluation period during which the employer can decide whether to accept or to deny a PTSD claim.

The deal does not modify benefits currently provided to police officers who seek treatment after using deadly force.

“This is a good day when we finally recognize PTSD is something we have to address in the state of Connecticut,” said Senate Majority Leader Bob Duff, who said one suicide tied to an untreated disorder “is one too many, and it is preventable.”

House Minority Leader Themis Klarides, R-Derby, also predicted the measure would be enacted, and said she believes all legislators have wanted to help police and firefighters who face trauma. But it also was important to find a program that would reflect municipalities’ abilities to fund these benefits.

“There are a lot of good concepts” in the legislature, she said. “It’s how we do them. This is a long time coming.”