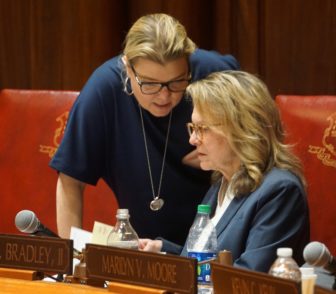 Connecticut’s minimum-wage workers will see their hourly wages rise from $10.10 to $15 over the next four-and-a-half years under legislation passed early Friday by the Senate and sent to Gov. Ned Lamont for his promised signature.

The final passage by the Senate on a party-line vote of 21-14 delivers on the first of two major labor bills promised by Democrats in campaigns that won the governor’s office and produced strong legislative majorities for the party in 2018, the other being a paid family and medical leave bill that is tentatively scheduled for a vote next week.

“All these combined are going to make a huge difference in people’s lives,” said Sen. Julie Kushner, D-Danbury, who unseated a conservative Republican last year. She led the debate as the co-chair of the Labor and Public Employees  Committee.

As was the case last week in an overnight debate in the House, the parties sharply split over whether the raises will provide an overdue boost to 332,000 low-wage workers or another blow to small businesses in a state with a weak economy. The senators also debated overnight, beginning at 8:22 p.m. Thursday and finishing more than six hours later.

For Kushner, bringing out the bill was a moment for a celebration, a reward for spending the first months of her retirement in a campaign for the Senate.

“I have to say it’s a great honor for me to be standing here in this chamber bringing to you the new minimum wage bill,” said Kushner, a former UAW regional executive. “I have spent my entire life fighting on behalf of workers, and it’s an incredible honor to now be in a position to lift the wages of so many of our state’s workers and get them closer to what would be a living wage.”

Kushner’s victory was one of several that made the vote possible. Democrats now control the Senate, 22-14, after two years with an 18-18 split. Sen. Steve Cassano, D-Manchester, who recently had surgery, was absent.

“I think this clears the decks for paid family leave,” said Jonathan Dach, the gubernatorial aide leading negotiations for the administration. Dach and legislators said there is an agreement on all key issues, and Senate President Pro Tem Martin M. Looney, D-New Haven, said he expects to schedule a vote next week.

With the support of a Republican governor, Massachusetts passed legislation last year that established a paid family and medical leave program and a schedule of minimum wage increases that will reach $15 in 2023, the same year as Connecticut. Lamont issued a statement Friday reiterating his intent to sign the bill as soon as it hits his desk.

“With this increase in minimum wage, thousands of hardworking women and men – many of whom are supporting families – will get a modest increase that will help lift them out of poverty, combat persistent pay disparities between races and genders, and stimulate our economy,” Lamont said.

At Lamont’s insistence, the bill has two provisions favored by business: a sub-minimum training wage for workers ages 16 and 17, who could be paid 85 percent of the state minimum for up to 90 days; and a freeze on the minimum wage for tipped workers, $6.38 for wait staff and $8.23 for bartenders. 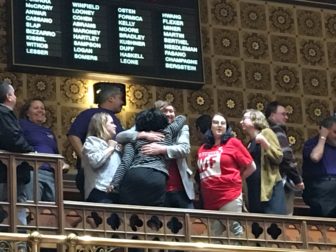 Supporters of the minimum wage celebrate in the Senate gallery after passage at nearly 3 a.m.

Democrats and Republicans disagreed Thursday night and Friday morning on what a higher minimum wage would do to the economy and who currently makes the minimum. Many Republicans see it as a wage primarily paid to teens and other entry-level workers, a stopping place on an upward journey.

A majority of workers paid the federal minimum of $7.25, a rate exceeded by the state minimums of every northeastern state except New Hampshire, are young and part-time workers, according to the Bureau of Labor Statistics. But advocates of a $15 minimum say the picture in Connecticut and other states with higher minimums is far different.

Research by the Economic Policy Institute indicates that 57 percent of minimum-wage workers overall are full-time employees, 37 percent are 40 or older and 28 percent have children.

Democrats rose to tell their stories.

Sen. Gary Winfield, D-New Haven, choked back tears describing his single mother’s efforts to provide for him and their family. Sen. Mae Flexer, D-Killingly, talked about her own family’s struggles in eastern Connecticut, choosing which bills to pay. It is an all too common story, she said.

“Those are the people we’re fighting for,” Flexer said.

Sen. Alex Bergstein, D-Greenwich, another freshman who unseated a Republican last year, said the bill would reduce by half the number of women living in poverty in Connecticut.

“That would be an amazing achievement,” Bergstein said.

Sen. Joan Hartley, a fiscally conservative Democrat from Waterbury, said afterward she had considered opposing the bill but ultimately backed it because of advocates’ willingness to phase the minimum wage increase over a 4 1/2 year period. An earlier version of the bill had proposed three years.

“That was a massive change,” she said. “I was pleased with the concessions that were made.”

Republicans responded with dire and even angry predictions that the bill will backfire, costing jobs and harming the intended beneficiaries. Sen. Rob Sampson, R-Wolcott, said the bill imposes “a steep increase that’s not founded in science or research,” but is “a campaign  slogan masking as public policy.”

“You know what fixes poverty?” Sampson said. “Not an artificial minimum wage that will not work, because business owners will not pay more than a job is worth.”

Sen. Paul Formica, R-East Lyme, whose mother raised him and four brothers after the death of their father, said he, too, grew up poor, working minimum-wage jobs as a teenager. But he also is a businessman, the owner of Flanders Fish Market, a restaurant that employs its share of single mothers.

His voice level,  Formica said there are many ways to care for low-wage workers, and one of them is to assure the availability of jobs.

“I hate that this is turning into a party conversation,” not one about people, Formica said. “We all have stories like Sen. Winfield and Sen. Flexer and me.” 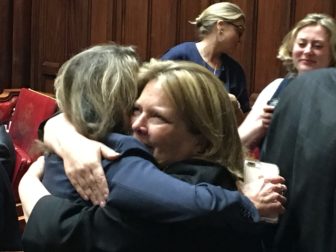 Kushner is embraced by Sen. Mary Daugherty Abrams after passage.

Sen. John A. Kissel, R-Enfield, was endorsed by the union-funded Working Families Party in 2008, as was Senate Minority Leader Len Fasano, R-North Haven. But no Republican has voted to raise the minimum wage since the Great Recession of 2008, and Kissel said the time for a raise still has not come.

“I don’t think our state at this point in time can afford this. Right now the businesses are talking to me, saying they are barely making it, please do whatever you can to try to stop this,” Kissel said, predicting job losses from the wage increase. “If I’m wrong, I’m wrong. But I’ve been around here long enough to say that sometimes bills with the best of intentions have unintended negative consequences.”