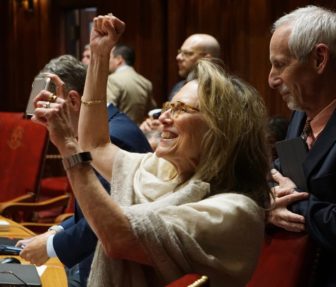 Setting aside the 11th-hour threat of a gubernatorial veto, the state Senate voted 21-15 Wednesday night to pass a Democratic bill that would create a paid family and medical leave insurance policy, a step toward a long-sought goal of labor progressives.

Passage ignited a celebration in the Senate chamber and gallery, but its final path to becoming law requires a victory in the House and the passage of a separate bill addressing Gov. Ned Lamont’s demand that the measure be revised to encourage private insurers to bid on the new line of business.

The disagreement with the governor was largely ignored during the debate of six-plus hours, a tactical decision by Democrats who focused on their common ground with the governor, leaving for another day a discussion about what separates them.

“The really good news here is that we agree — with the governor, with the House — on the fundamental elements of this bill,” Sen. Julie Kushner, D-Danbury, said before the debate began. “This bill will provide working families with time off to take care of their kids with wage replacement, so that they don’t have to pick between their family members and a paycheck.”

Kushner, a former UAW leader who unseated a conservative Republican last year and is now co-chair of the legislature’s Labor and Public Employee Committee, pumped her fist at allies in the gallery upon passage, then accepted the hugs of colleagues. Family leave was one of the primary reasons she ran, Kushner said.

“This was a major night of success in the state Senate, something that we’ve been working on for a long time,” said Senate President Pro Tem Martin M. Looney, D-New Haven, one of the longest-serving members of the General Assembly. “This issue of paid family and medical leave, critically important for families in Connecticut, many of whom are living without a net.”

While celebratory yells still echoed throughout the State Capitol, Lamont emailed a statement reiterating that he sees the bill’s benefits as necessary and important, but its execution as fatally flawed because it effectively shuts out private insurers and instead relies on government agencies to design, launch and administer a new form of disability insurance.

“The families waiting for these vital benefits cannot afford another healthcare.gov. We need to make sure this program is solvent, efficiently administered and nimble enough to adapt and adjust as needed, particularly in its first few, crucial years,” Lamont said. “I don’t believe the legislation, as currently drafted, will allow for that.”

House Speaker Joe Aresimowicz, D-Berlin, would not commit to calling the bill for a vote in the House until he consults with his caucus and explores how deep are the differences between the Lamont administration and the legislature.

“If we can find resolve between the two caucuses and the governor’s office, we want to run the bill,” Aresimowicz said.

Looney said the legislation provides sufficient flexibility for the quasi-public authority it would create, the Paid Family and Medical Leave Authority, to credibly seek bids from private insurers. But he and other Democrats left that argument for another time.

The debate in the Senate explored a deeper clash of philosophies in the legislature, pitting a Democratic commitment to replicating a new social benefit available in neighboring states and most industrialized nations against a Republican call to trust in the free markets and goodwill of private employers.

Sen. Joan V. Hartley, D-Waterbury, an economic and fiscal conservative, was the only Democrat to vote with the Republican minority.

The result Wednesday night was largely ordained by the 2018 elections in which Democrats made their first state legislative gains since 2008, regaining solid control of the General Assembly. After two years of a closely divided legislature, the Democrats now have majorities of 22-14 in the Senate and 91-60 in the House.

The Democratic plan would provide 12 weeks of wage replacement to nearly every private-sector worker who falls ill or needs to care for a family member, including the poorest of the working poor, the men and women who juggle minimum-wage jobs that often provide no benefits.

But Republicans noted those workers would have no choice in purchasing that coverage. It would come at an annual cost of $156 for minimum-wage workers and a maximum of $664.50 for those with six-figure incomes. Those premiums would be paid by a payroll tax on workers of one-half of one-percent.

Senate Minority Leader Len Fasano, R-North Haven, said the Democrats’ message in the bill is, “Let us control your life.”

Republicans countered with a less ambitious alternative: Setting standards for short-term disability and family-leave coverage policies to be offered by insurers. They said they did not know what such a policy would cost.

At a press conference and during the Senate debate, Republicans said they supported the concept of paid family and medical leave, but not one that is envisioned by Democrats and is now a matter of public policy in surrounding states.

“Unfortunately, the Democrats’ proposal that we’ve seen is a payroll tax, plain and simple — a payroll tax that you cannot opt out of, you have no choice,” said House Minority Leader Themis Klarides, R-Derby.

Sen. Rob Sampson, R-Wolcott, said the Democratic bill is intrusive, covering every private company that has as much as a single employer, imposing a benefit that should be an issue for employer and employee.

“This is a relationship between the employer and employee,” Sampson said.

Kushner said the Republican alternative would leave employees reliant on the kindness of their employers and the luck of finding a flexible boss, the labor equivalent of winning a lottery.

“And not everybody wins in that kind of lottery,” Kushner said. “When it comes to choosing between a paycheck and taking care of a loved one, you shouldn’t have to play the lottery.”

If the bill becomes law, benefits would become payable in January 2022.

Payroll subjected to the new tax would be limited to the amount of annual earnings subject to Social Security taxes, currently capped at $132,900. Benefits would be calculated on a sliding scale, according to income.

A worker earning $600 a week would receive benefits equal to 95 percent of wages, or $570. The rationale is that someone working close to minimum wage could not afford to take leave without getting close to current wages.

Total weekly compensation would be capped at $900.

Disputes over whether is a worker is eligible would be resolved by the state Department of Labor, pursuant to a memorandum of understanding with the authority.

The plan has been reviewed by actuaries, but in the case of a shortfall the  authority is required to reduce the benefit by the minimum amount necessary to ensure solvency. It has not power to increase the payroll tax. 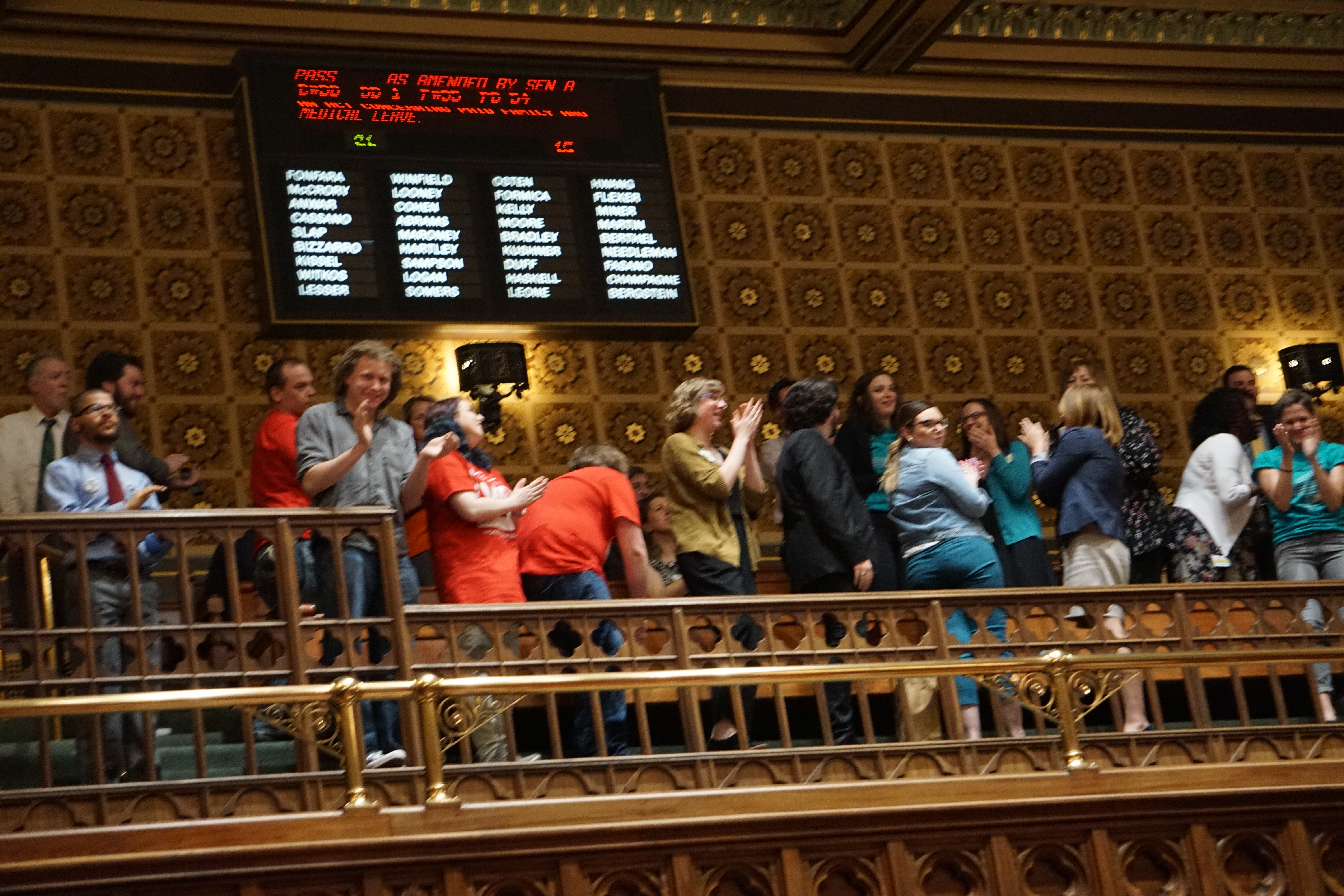