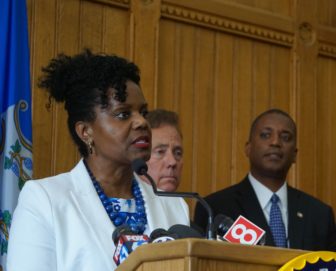 Connecticut is joining the growing list of states no longer willing to wait for the federal Environmental Protection Agency to study and make recommendations on how to respond to an emerging environmental threat from a class of 4,700 ubiquitous chemicals collectively known as PFAS substances.

Gov. Ned Lamont announced the creation of an inter-agency task force Monday to develop an action plan on how to measure and address pollution from the chemical class known as per- and polyfluoroalkyl substances — a threat largely unknown to the public here until a spill of firefighting foam last month at Bradley International Airport.

“Truth be told, I’m pretty new to the threat that is PFAS substances,” Lamont said.

His environmental and public-health officials have been working with their regional counterparts for months, discussing a relatively widespread source of pollution detected in New Hampshire, Vermont and other states. The toxic chemical has been discovered in the drinking water at 700 homes in New Hampshire.

But it was not on the agenda of the governor, or widely known in Connecticut, until the accidental activation on June 9 of a fire-suppression system at a hangar owned by a flight-services company, Signature Flight. It released about 40,000 gallons of firefighting foam with PFAS substances, some of which flowed through the MDC sewer system into the Farmington River in Windsor.

Renée Coleman-Mitchell, the commissioner of public health, said PFAS was presented to her as a public health threat in an email on April 2, her second day as a member of the Lamont administration. As well as in firefighting foam, PFAS substances are commonly used in industrial and consumer products, including non-stick cookware, stain-resistant fabrics, water-proofing and some food packaging.

“It is something that is in all of us,” Coleman-Mitchel said. 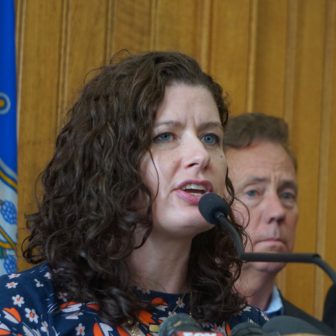 Katie Dykes, the commissioner of DEEP: “The science is increasingly clear about the health risks.”

PFAS substances have been dubbed as “forever chemicals,” because they persist in the environment and accumulate in the body. Used since the 1940s, they have been linked to cancers and are suspected of compromising the immune systems and overall development of children.

“The science is increasingly clear about the health risks,” said Katie Dykes, the commissioner of energy and environmental protection. “So we’re here today to discuss how this administration will minimize the exposure of residents, minimize future releases to the environment and clean up historical releases of these contaminants.”

“It’s up to the states to take the lead and get ahead of the curve,” Lamont said.

The National Law Review reported last week that at least eight states have passed or proposed legislation banning or restricting the use of firefighting foams with PFAS substances. There is no restriction in Connecticut on the use of the foam, even in training exercises.

Coleman-Mitchell and Dykes are chairing the inter-agency study. The group’s first meeting will be at 1 p.m. on July 30 at the Department of Public Health’s laboratory at 395 West Street in Rocky Hill. Their deadline for delivering a plan to the governor is Oct. 1.

Eric Weiner, who lives near the Farmington River in Windsor, complained to Lamont and other officials at the announcement that the state should be taking some actions now, such as restricting the use of PFAS substances in firefighting.

He also said the state should have been more aggressive in warning residents about eating fish caught in the Farmington River after the spill.

Dykes told Weiner that the inter-agency group will make interim recommendations if the facts warrant.