Gov. Ned Lamont and his top economic and budget officials worked Thursday to change the Wall Street Journal’s dim view of Connecticut as a place to do business, urging the Journal’s editorial writers and, separately, viewers on MSNBC and CNBC to see the state as firmly on the path to a fiscal turnaround.

Lamont began his day in New York at MSNBC’s “Morning Joe” and ended it on CNBC’s “Closing Bell.” In between, the governor visited the Journal, which recently skewered Connecticut’s tax policies and business climate, and attended a foreign policy address by his choice for president, Joe Biden.

He briefly visited Biden backstage after the speech, and called him “a good man” on “Morning Joe.” The Biden stop was a late addition to a day devoted to polishing Connecticut’s image for people influential with business, especially the editorial page of the Wall Street Journal.

At the Journal, his staff said, the governor talked about being a businessman who held the line on  income-tax rates in his first budget and has vowed to minimize the use of giveaways to spur economic growth.

“I think the governor struck the right tone,” said David Lehman, the former Goldman Sachs partner who advises Lamont on economics and serves as his commissioner of economic and community development. “It was a really important day.”

Lehman and Melissa McCaw, who oversees the state budget as secretary of policy and management, joined Lamont for a private meeting at the Wall Street Journal, helping to rebut an editorial that criticized the state for tax increases on everyone and generous economic-development packages for a lucky few.

“Thus we have Connecticut’s business model: Raise costs for everyone and then leverage taxpayers to provide discounts for a politically favored few. A business that operated like this would lose customers and eventually go bankrupt,” the Journal wrote. “That may be where Connecticut is headed.”

The editorial noted that the state gave away more money in corporate incentives in 2016 than it brought in through a corporate tax increase imposed the previous year.

Maribel La Luz, who is leaving the governor’s office as communications director to become the senior advisor to Lehman on external affairs, said Lamont, Lehman and McCaw spent more than an hour talking about what has changed since Lamont took office in January.

It builds on a letter from Lamont that the Journal published on June 24, two days after the editorial. He called himself “a small-business Democrat, someone who knows what it means to balance a budget at the end of the month.”

“I wasn’t going to sign a budget that increased income-tax rates for anyone in the state. I announced a self-imposed Debt Diet that reduced authorizations to Connecticut’s decades-old addiction to bonding by 40%. I kept spending increases in line with inflation the first year of the budget, with a modest increase in the second year. And I maintained a rainy-day fund in excess of $2 billion—the largest in the state’s history.”

Connecticut still faces significant financial challenges, including one of the nation’s largest unfunded pension obligations, the result of generous benefits and decades of underfunding. Retirement benefits have been cut significantly for new employees, but there is no quick fix for the unfunded liability.

The Lamont administration is making the case the state is now moving in the right direction, seizing on a metric it hopes plays well on Wall Street — bond ratings.

The timing of the visit was propitious. The previous day, the bond-rating agency, Kroll, improved its outlook on Connecticut from negative to stable. Four months ago, Standard & Poor’s raised its outlook from stable to positive.

On CNBC, Lamont’s introduction by Sara Eisen included a mention that Connecticut was 35th in CNBC’s latest rankings of the best states for business.

The state gets high grades for education and quality of life, but Eisen told him the new ranking show Connecticut with  Ds on other key measures: its economy,  infrastructure and cost of doing business.

“You’re a tough grader,” Lamont said, smiling. Then he noted the state had actually crept up from 37th to 35th.

“Here’s what we had to do,” Lamont said. “We had to get an honestly balanced budget done on time without raising taxes. We did that. That hasn’t happened in a long time in the state. Secondly, what we got to do is invest in infrastructure.”

Lamont did raise taxes. Later in the 4-minute interview, he correctly said he did not raise tax rates. 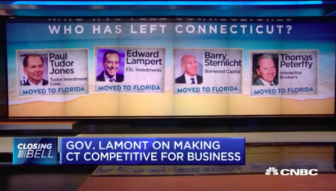 One of the graphics that popped up during Lamont’s appearance on CNBC.

While he spoke, several graphics flashed on screen, not all complimentary. One showed four prominent businessmen who have left Connecticut.

In a telephone interview on his trip back to Connecticut, Lehman said he thought the day went well, especially the visit to the Journal.

“They had a negative predisposition toward us in the past. I think it’s really important we change that and address it head on,” he said. “I hope this day was the first many in that effort.”

Lamont  has not completely sworn off financial incentives to business, but he vows to minimize them. Lehman said they cannot be completely eliminated, as they are now baked into economic development.

“We’ve been consistent, and I hope clear, that while it is part of the dialogue, it’s not something we’re going to lead with,” he said. “I told the Journal, the free markets, I’m a believer in that, but ultimately incentives are part of the dialogue with businesses these days.”