Next court hearing scheduled for Monday 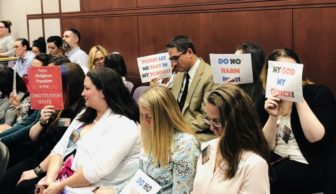 People gathered at the state’s Legislative Office Building in May to condemn a plan to remove the religious exemption on vaccines.

Lawyers for the state have asked a Superior Court judge to dismiss a lawsuit filed by a Bristol couple suing to block the release of data that highlights what percentage of children at each Connecticut school are unvaccinated.

The state health department, named as a defendant in the case, in May released the first school-by-school assessment of child immunization rates. The data from the 2017-18 year show 102 schools where fewer than 95 percent of kindergarten students were vaccinated for measles, mumps and rubella – the threshold recommended by the Centers for Disease Control and Prevention.

The release of the data sparked outrage among politicians and an aggressive, last-minute push to repeal the state’s religious exemption to vaccines. Lawmakers ultimately agreed to shelve the issue until next year.

Kristen and Brian Festa, whose son attends Meliora Academy in Meriden, have asked the court to issue an injunction halting the distribution of new data – this time, from the 2018-19 school year – and are seeking the removal of the 2017-18 figures, which are posted on the health department’s website.

But lawyers for the state say the Festas lack standing because they have not proved that the data release harmed them. In their filing, the Festas said the school-by-school assessment triggered a flood of “hateful and vitriolic statements” on the Internet against unvaccinated students and their parents, though they acknowledged that they had not been directly harassed or threatened.

“Any ‘hateful and vitriolic’ statements made toward the plaintiffs were made by third parties and not in any way condoned or attributable to the defendant,” Assistant Attorney General Darren P. Cunningham wrote in the state’s motion to dismiss.

The next hearing on the case is scheduled for Monday.

Legislative leaders have said they are awaiting the release of the 2018-19 school year data. The health department would not say whether it still plans to make the latest information public.

Amid a national measles outbreak this year, lawmakers sought to wipe out Connecticut’s religious waivers. They organized a public hearing in May, which drew hundreds of concerned parents who testified against the proposal. But with limited time left in the legislative session, lawmakers decided to postpone the effort until 2020.

The proposal would not have forced children to be immunized. It would have prohibited unvaccinated children from attending Connecticut’s public schools.

Kristen Festa testified at the public hearing that her son became immunosuppressed as the result of a flu shot, which changed her beliefs about vaccinations.

“My religion dictates that it is my primary duty in life to protect my children; specifically, parents have the most grave obligation and the primary right to do all in their power to ensure their children’s physical, social, moral, and religious upbringing,” she said. “After watching my son’s health be stolen from him by the most pointless of vaccines, there is no way I could stand before God and agree to inflict further harm.”

At Meliora Academy, a private, special education school, 18.5 percent of students claimed the religious exemption in 2017-18. Though higher than many other institutions, Meliora did not have the largest exemption rate that year.