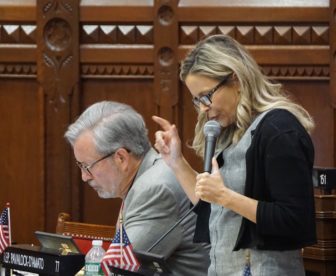 Rep. Cara Pavalock-D’Amato, R-Bristol, right, has agreed to represent a couple in a vaccine-related lawsuit.

Cara Pavalock-D’Amato, the ranking House Republican on the legislature’s Insurance and Real Estate Committee, has agreed to represent a Bristol couple suing to block the state from releasing data that show what percentage of children at each Connecticut school are unvaccinated.

The legislator, who has a law degree from St. Thomas University in Miami, said she heard about the case from Brian Festa, who is her constituent and a plaintiff in the lawsuit.

Festa filed the complaint in May with his wife, Kristen Festa, seeking to bar the release of data from the 2018-19 school year that highlights vaccine exemption rates by school. The couple is also seeking the removal of the 2017-18 figures, published on the state health department’s website earlier this year.

Pavalock-D’Amato said she believes the state breached its own regulations by publishing the school-by-school assessment of child immunizations. It was the first time the health department has released those figures, prompted by concerns this year over measles cases in Connecticut and an outbreak of the disease nationally. Three measles cases have been reported in the state, and 1,123 cases have been recorded nationally.

“There isn’t any rational basis for publishing the information,” Pavalock-D’Amato said. “We haven’t had any instances in Connecticut of children with some of the diseases that these vaccinations prevent. So I think it’s just creating fear.”

In April, she joined 40 other Republican lawmakers and three Democrats in signing a letter to Attorney General William Tong that said repealing Connecticut’s religious exemption to vaccines would be illegal under state and federal law.

Tong disagreed, later issuing an opinion that said there is no constitutional barrier to removing the state’s religious exemption.

Lawmakers sought to eliminate the exemption this year. As the national outbreak intensified, they organized a public hearing and began debating ways to repeal the religious waiver. But with limited time left in the legislative session, lawmakers decided to postpone the effort until 2020.

The proposal would not have forced children to be immunized, but it would have prohibited unvaccinated children from attending Connecticut’s public schools.

In their lawsuit, the Festas claim that the state’s release of the 2017-18 school year data triggered a flood of “hateful and vitriolic” remarks on social media against parents of unvaccinated children. The couple has a 7-year-old son who attends Meliora Academy – one of the schools mentioned in news reports as having a high rate of unvaccinated students. 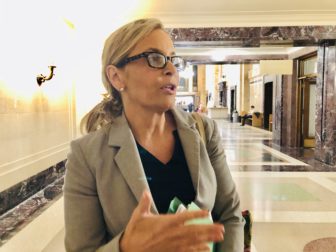 Pavalock-D’Amato said her clients have received “hurtful” comments since they filed the lawsuit in May.

In 2017-18, 18.5 percent of students at Meliora, a private, special education institution in Meriden, claimed the religious exemption.

“One Facebook user made the post, ‘If my kid can’t bring peanut butter to school then yours can’t bring the deathly plague. Vaccinate or I’m bringing Jiffy,’” the Festas wrote in the lawsuit.

Another, they said, wrote on the social media site: “So you are an antivaxxer? You should probably move to a private island if you don’t like the U.S. We would all be happy with that, especially if you are a scumbag antivaxxer.”

In earlier court filings, the Festas said they had not directly been threatened. But Pavalock-D’Amato said Monday that since the lawsuit was filed, her clients have been the targets of harassment. The comments they received “were hurtful,” she said.

“At the end of the day, I think it is a parent’s choice,” Pavalock-D-Amato said. “It’s up to the parents whether to get their kids vaccinated. I don’t think they should be harassed for whether they do or don’t.”

The state has asked a Superior Court judge to dismiss the case, saying the Festas lack standing because they have not proved that the data release harmed them.

At a hearing Monday morning, the case was continued to give Pavalock-D’Amato time to file a reply to the state’s motion.