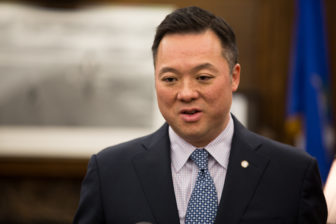 Connecticut filed another lawsuit Wednesday in its battle against federal income tax limits aimed primarily at those states that voted against President Trump in 2016.

The latest lawsuit, filed in the U.S. District Court for the Southern District of New York, seeks to strike down a new IRS rule that would prevent Connecticut residents from obtaining a full federal charitable deduction when they give to organizations established by their city or town.

“Connecticut won’t stand idly by while the Trump Administration harms our taxpayers,” state Attorney General William Tong said. “Our legislature sought to ease the financial burden this [federal tax] cap has on residents by passing a law to protect our taxpayers. The IRS final rule not only undermines those legislative efforts but it eliminates the state’s ability to mitigate the harmful effects of this law.”

“The federal tax reforms approved by Congress were promoted as a tax-cut, but in reality they’ve resulted in a tax hike for millions of citizens, including thousands here in Connecticut,” said Gov. Ned Lamont. “This was a purely partisan bill and — let’s be frank — aimed directly at blue states like Connecticut, New York, and New Jersey. It’s unfair, discriminatory, and unconstitutional.”

The controversy began in late 2017 when the Republican-controlled Congress enacted a $10,000 limit on the state and municipal tax payments that filers can deduct on their federal income tax returns.

It disproportionately punishes Connecticut and other states that rely heavily on state income and municipal property taxes to pay for government programs and services.

In some communities in Fairfield County and Long Island, for example, many residents pay far more than $10,000 annually in real estate tax alone.

Most of the states in which taxpayers claim the largest state and local tax (SALT) deductions opposed Trump in 2016.

Connecticut joined New York, New Jersey and Maryland one year ago in challenging those tax changes in federal court. That case is still pending.

But the 2018 Connecticut legislature and then-Gov. Dannel P. Malloy also changed state tax laws in an attempt to cushion the blow.

One change allows municipalities to provide a property tax credit to taxpayers who make voluntary donations to a “community-supporting organization” approved by the municipality. While the federal deduction for state and local taxes could not exceed $10,000, the rationale is that some or all of that payment also could be deducted from federal taxes as a “charitable donation.”

But the IRS responded by nullifying this relief, ruling such contributions could not be deducted on federal income tax returns.