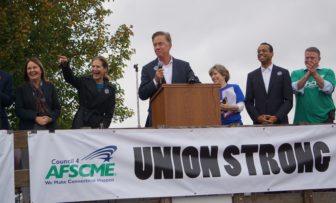 Gov. Ned Lamont checked off a key box on his budget to-do list Thursday, announcing a deal with state employee unions to refinance payments into the workers’ pension fund.

The deal, which would save the state $130.7 million this fiscal year and $140.7 million in 2020-21, marks the second time in three years Connecticut has restructured its payments into the cash-starved pension fund. It makes no changes in pension benefits.

The agreement, which still must be ratified by the legislature, was approved over the last week by the governing board for the State Employees Bargaining Agent Coalition. SEBAC notified the administration of that approval Wednesday.

“This is a good day for Connecticut as we continue making significant strides that are stabilizing our state’s finances and addressing our fixed costs,” Lamont said. “Some may have doubted our ability to achieve the budgeted pension savings, but here we are, and I am sure even they will enthusiastically agree that today’s news positions our state on firmer financial ground well into the next decade.”

The Democratic governor was alluding to the top Republican in the Senate, Len Fasano of North Haven, who had criticized Lamont for not resolving union negotiations prior to the adoption of the current state budget back on June 4.

Though the pension refinancing will save state money this fiscal year and next, it will cost Connecticut over the long haul.

Both of the state’s major pension funds — for state employees and for municipal teachers — suffer from decades’ worth of inadequate contributions between 1939 and 2010.

Analysts commissioned by Gov. Dannel P. Malloy warned in 2015 that annual required contributions into both pensions were headed for dangerous spikes by the early 2030s.

Malloy and SEBAC reached a deal in 2017 to smooth out payments into the state employees’ pension. Contributions still would rise between now and 2032, though not as sharply as originally projected.

Similarly, state contributions between 2033 and the late 2040s would be inflated, making up not only the amounts deferred before 2032 — but also the projected investment earnings the state would have made had it contributed in accordance with the original schedule.

Lamont received legislative approval this year to order a similar restructuring of the teachers’ pension — and to order a second refinancing of the state employees’ pension.

Full details of that refinancing, including all of the changes to annual pensions contributions over the next few decades, were not available Thursday.

“This will allow the state significantly more sustainability in budgeting, honoring our commitment while in alignment with revenue growth, which is helpful in the near term and for the decades ahead,” said Lamont’s budget director, Office of Policy and Management Secretary Melissa McCaw.

Lamont did note that Connecticut’s growing fiscal reserves could position the state to make additional debt payments in the coming years.

The rainy day fund, which currently holds $1.2 billion, in slated to rise to a record-setting $2.2 billion by the end of September.

“The pension liability we face is decades in the making and will take decades to resolve,” the governor said. “I remain committed to funding this commitment in a financially reasonable manner.”