Has CT broken its cycle of budget deficits? 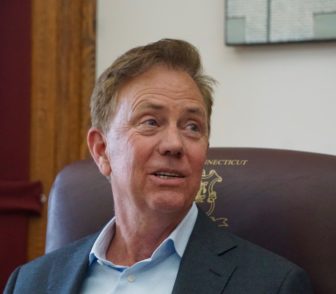 At first glance it appears that he succeeded. The Democratic governor recently signed a budget that balances spending for the next two fiscal years — without increasing income tax rates — and raises the emergency reserve to a record-setting level.

But there also are signs that state government hasn’t solved its budgetary Rubik’s cube.

While the new, two-year budget is balanced on paper, nonpartisan analysts say it’s not sustainable beyond that. And once the new biennium expires in mid-2021, the budget — if not adjusted — would rack up $2.5 billion in red ink by mid-2023.

“When we have another economic downturn, and we will, we won’t have to cut services as much,” said Sen. John Fonfara, D-Hartford, co-chairman of the Finance, Revenue and Bonding Committee.

By keeping spending lean, growing the reserves and preserving new programs designed to force government to save, Lamont and legislators have left Connecticut better positioned to enjoy fiscal stability than at any other time in recent history, he said.

“It’s not easy to stay the course, and we did,” Fonfara said. “The legislature did not — and I was of the mind that it would — make a serious run at [spending] the reserves.”

What are out-year deficits and why do they matter?

Since Connecticut emerged from “The Great Recession” in 2010, it has been plagued by what analysts refer to as “out-year deficits.”

When a new two-year budget is adopted, analysts also try to project how that plan would fare three and four years down the line.

With pension and other debt costs surging, and revenues growing slowly in a sluggish recovery, Connecticut spent much of the past decade staring at out-year projections featuring huge deficits.

For example, when the previous two-year budget was enacted in 2017 — covering the 2018 and 2019 fiscal years — analysts warned finances would run almost $4.6 billion in the red over 2020 and 2021 combined, unless adjustments were made.

By the time Lamont took office this past January, the projected deficit for 2020 and 2021 had been downgraded to $3.7 billion, but that was still a daunting figure involving potential deficits of roughly 9 percent per year in the General Fund.

“Let’s fix this damn budget, once and for all!” Lamont told lawmakers in his first State of the State Address.

Why do these out-year deficits matter?

For one thing, if they’re in the billions of dollars, they typically are filled — at least in part — with tax increases.

Out-year deficits in the billions of dollars also often lead to broken promises.

The most recent budget canceled previously approved tax cuts before they took effect for hospitals, middle-income households without children, and college graduates with student loan debt.

And a suspended program to share hundreds of millions of dollars in state sales tax receipts annually with cities and towns remains in legal limbo.

So what happened when the latest two-year budget was adopted in early June?

The legislature’s nonpartisan Office of Fiscal Analysis concluded that while the out-year deficit problem has gotten relatively smaller, it remains a significant challenge.

State finances, unless adjusted, would run more than $2.5 billion in deficit between 2021 and 2023, with potential annual deficits between 5.5 and 7 percent of the General Fund. Pension and other debt costs, fringe benefit expenses and Medicaid are key drivers of these shortfalls.

McClure said these out-year forecasts provide valuable guidance “but the underlying conditions of the projection can be changed.

“With that, the work must continue: we will continue to find win-win solutions with our labor partners, we will work with the legislature to determine whether large-scale programs are realistic, we must evaluate how to drive greater efficiencies, we must reduce our borrowing and thereby reduce our debt service, and we can make state government smarter and more efficient.”

McClure added that “the changes we should be focused on are those that will bring us more stability, predictability, and long-term growth to ensure that the next out-year projection is even better and that Connecticut is on a sustainable path forward.”

But Republican legislative leaders say things aren’t as rosy as the Democratic governor and his administration contend. 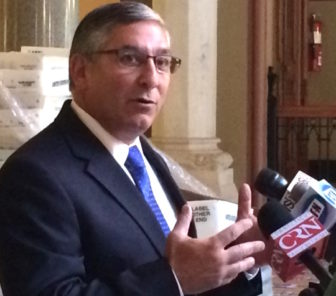 Senate Minority Leader Len Fasano, R-North Haven, says the latest budget is balanced on hundreds of millions of dollars of risky assumptions. And if those prove to be false, then the out-year forecasts are far worse as well.

The new, two-year budget assumes $180 million in total income tax receipts above and beyond the level projected by fiscal analysts for the legislature and governor in their last consensus report on April 30.

It also relies on nearly $190 million in savings related to efficiences in health care benefits that still have to be crafted in collaboration with state employee unions.

And both McCaw and labor leaders have said they expect to achieve all health care savings anticipated in the new two-year budget.

But Connecticut has gone more than nine years since the last recession ended. History would suggest the next recession isn’t that far off, and Deputy House Minority Leader Vincent J. Candelora, R-North Branford, said this new budget could exacerbate any downturn.

“I’m worried that the tax increases in this budget may have the same effect on our economy that we saw in 2011,” he said, referring to Connecticut’s slow climb out of the last recession.

But Fonfara said state government is better positioned to handle downturns that it was in the past.

The rainy day fund, which currently holds $1.2 billion, is slated to rise to $2.3 billion once the final audit of the just-completed fiscal year is wrapped in late September.

The bipartisan budget adopted in 2017 also added new programs designed to force Connecticut to save more. And early estimates are that the state could add more than $930 million to its reserves in each of the next two fiscal years.

Fonfara said both parties deserve credit for insisting on those reforms two years ago.

“Bipartisanship allowed both sides to get something done together and give us the fiscal stability that is good for everybody,” he said.

9 thoughts on “Has CT broken its cycle of budget deficits?”