Larson gets an earful about impeachment at emotional town hall 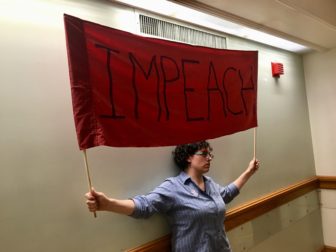 Cecilia Caride, of Windsor, said her message to Rep. John Larson was clear.

If Rep. John Larson hoped to field a bunch of softball questions about his work on Social Security reform and health care during a town hall meeting Tuesday night in West Hartford, he was probably sorely disappointed.

Instead, the congressman was confronted by angry constituents  frustrated with his refusal to call for President Donald Trump’s impeachment.

“Just impeach him,” shouted a number of people who attended the event, drowning out Larson’s attempts to speak.

Mary Fleischli, a West Hartford resident, drew applause and supportive shouts from the audience when she challenged Larson.

“I want to know two things. First, have you read the Mueller report?” Fleischli asked. “Secondly, if you have, how can you justify not having impeachment proceedings?”

Larson’s answer — that it is more prudent to wait for the results of multiple House investigations into the Trump administration, the Trump campaign and Trump businesses — did not seem to satisfy many in the audience.

“I want to know two things. First, have you read the Mueller report? Secondly, if you have, how can you justify not having impeachment proceedings?”

It is not surprising that Larson is facing tough questions from voters now.

The issue of impeachment has split U.S. House Democrats. About half of them, or nearly 120, support impeaching Trump or opening an impeachment inquiry – an act that would show concern about Trump’s behavior and an effort to get more facts without committing to a final position on impeachment.

About two dozen Democrats came out in favor of impeachment after former special counsel Robert Mueller testified before two House committees last month on his investigation of the Trump campaign and the Trump administration. Among other things, Mueller’s final report revealed the Trump campaign welcomed Russian help and the president made possibly obstructive moves to interfere with the special counsel’s probe.

House Speaker Nancy Pelosi, D-Calif., firmly opposes any impeachment push, believing it could imperil Democrats representing districts Trump won and risk her majority and that the GOP Senate would never vote to convict the president.

And Rep. Jahana Hayes, D-5th District, said she’s not backing impeachment right now, but is open to the idea. 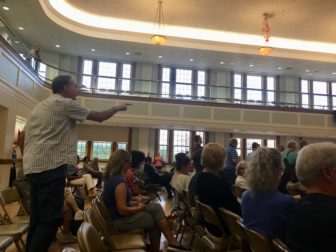 At his town hall in West Hartford, Rep. John Larson was frequently interrupted by calls to impeach President Donald Trump.

She also said the issue of impeaching the president, or beginning an impeachment inquiry “is not off the table” for her.

Like Larson, Hayes said she has received push-back from constituents urging her to support impeachment.

While many issues were broached at Larson’s town hall, such as health care and the border crisis, none were more contentious than the topic of impeachment.

Manchester resident Stephen Slota attended the event to ask Larson his position on impeachment. Afterward, Slota said he was disappointed in the lawmaker’s response.

“It comes across as pretty tone deaf to the environment that we’re living in,” Slota said. “He’s approached this issue of impeachment as though these are normal times and they are not normal times.”

That was clear from the anger being expressed by many in the crowd, including Mary Fleischli, the West Hartford resident who asked Larson if he’d read the Mueller report.

“Do we have a shot of getting the presidency away from this criminal?” Fleischli questioned further, ramped up by jeers and shouting.

But there were some in the audience who support Larson’s position on impeachment, including Joe Duffy and his wife Donna, who live in Wethersfield.

Duffy said he can understand the anger expressed at the event, but said holding off on impeaching Trump “is the best way to elect a Democratic president in 2020.”

“Anything else is a catastrophe,” he said.

Duffy also said Larson made a good case for resisting impeachment, when the crowd finally allowed him to speak.

“He said ‘you have to have facts,’”and pressed for encouraging ongoing House investigations, Duffy said. “But the crowd was not interested in those formal procedures.”

Duffy concedes that Trump’s presidency is an emotional issue for Democrats. Polls show a majority of Democrats favor Trump’s impeachment.

When a mix of voters were asked in a Quinnipiac University poll conducted at the end of last month whether ”Congress should begin the process to impeach President Trump” only 32 percent of the respondents said “yes.” Sixty percent said Congress should not act.

But when just Democratic voters were polled, 61 percent said they thought Congress should begin impeachment proceedings.

While lawmakers like Larson are likely to continue to hear from Democrats favoring impeachment as they spend their August recess trying to reconnect with voters, reaching consensus among House Democrats is not expected — unless Pelosi changes her mind.