Washington – More than 200 mayors, including those running Connecticut’s major cities, on Thursday called on the Senate to return immediately from its August recess to vote on legislation that would strengthen background checks for gun buyers.

A letter from the U.S. Conference of Mayors sent to Senate Majority Leader Mitch McConnell and Senate Minority Leader Charles Schumer said “already in 2019, there have been over 250 mass shootings.”

“The tragic events in El Paso and Dayton this weekend are just the latest reminders that our nation can no longer wait for our federal government to take the actions necessary to prevent people who should not have access to firearms from being able to purchase them,” the mayors said.

“Proud to stand with 214 other mayors from across the country in calling on the U.S. Senate to reconvene and take immediate action on bipartisan, Common Sense gun laws,” Cantor tweeted. “We have to work together to make our cities and our country safer.”

But cancellation of the Senate’s summer recess, scheduled to end on  Sept. 9, isn’t likely to happen.

McConnell told a Kentucky radio station Thursday that he would like the Senate to hold bipartisan talks on gun issues in September.

“If we do it prematurely it will just be another frustrating experience. … I think this is the best way to get a result,” the majority leader said.

The push to broaden FBI background checks of prospective gun purchasers was touched off by the massacre of 20 first graders and six adults at Sandy Hook Elementary School in December of 2012.

The legislation never received the 60 votes needed to pass in the Senate. But two background check bills were approved by the House, which is now controlled by Democrats, in February.

One would require the FBI to vet gun sales by individuals over the internet and at gun shows. The other would extend the FBI’s three-day deadline to investigate a prospective gun purchaser to as many as 20 business days. Proponents say extending the deadline would eliminate the   “Charleston Loophole” that allowed white supremacist Dylann Roof, who killed nine African-Americans at a church in Charleston, S.C., in 2015, to buy a gun despite pending felony drug charges against him. 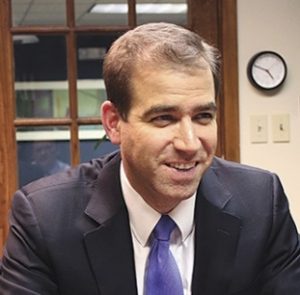 Hartford’s Luke Bronin is among more than 200 mayors urging the U.S. Senate to reconvene to work on gun legislation.

Signers of the letter included some Republicans and mayors representing cities and towns that have suffered from mass shootings, including El Paso, Parkland and Orlando, Fla.

Schumer has called for the Senate to return from its recess to vote on the House background check bills.

After the weekend’s mass shootings, which killed 31 people and injured dozens, Democrats and gun control activists believe they have public support on their side and have pledged to keep the pressure on McConnell, who is up for reelection next year in a deeply red state.

The majority leader is recovering from a fall that resulted in a broken shoulder at his home in Louisville, Ky. Greg Fischer, the mayor of Louisville, was among those who signed the letter to McConnell.

Meanwhile, there is no agreement in Congress on how to respond to the violence.

But National Rifle Association Chief Executive Wayne LaPierre spoke to the president recently and told him tightening background checks would not be popular among Trump’s supporters.

Trump and GOP congressional leaders have also indicated they would be open to considering a national “red flag,” or extreme risk protection order law, something Connecticut pioneered in 1999 . Those laws allow the confiscation of weapons from those who are believed to be a danger to themselves and others.

Sen. Richard Blumenthal, D-Conn., is working with Sen. Lindsey Graham, R-S.C., on a bill that would create a federal grant program to encourage states to adopt “red flag” laws.

“These grants will be given to law enforcement so they can hire and consult with mental health professionals to better determine which cases need to be acted upon,”Graham said in a statement.  “This grant program also requires robust due process and judicial review. It does allow for quick action.”

Graham said he spoke with Trump on Monday about the proposal  and that the president “seems very supportive.”

Schumer, however, said Senate approval of a red flag law is not enough.

“The notion that passing a tepid version of an extreme risk protection order bill—alone—is even close to getting the job done in addressing rampant gun violence in the United States is wrong and would be an ineffective cop out,” Schumer said.

Schumer also criticized the voluntary nature of the Blumenthal-Graham approach.

Instead of a mandate, Schumer said, the bill would “just provide grant incentives for states to implement laws of their own, which runs the risk of doing more harm than good in the long run if states decide to take up weaker laws.”

Blumenthal, meanwhile, said “our goal is to save as many lives as possible, as quickly as possible, through commonsense steps that keep guns out of the hands of dangerous people.”

Although Blumenthal is drafting a red flag bill, he said he supports other gun measures, too, including  a ban on assault weapons and high capacity magazines; safe storage laws; and a repeal of gun manufacturers’ legal immunity from certain liability.

Gun control advocates are also continuing to push for more than background check or red flag laws, including a ban on assault weapons.

“Weapons that belong on the front lines in war zones were used by gunmen in Dayton, El Paso and Gilroy to brutally murder and injure innocent Americans in matter of seconds and minutes. This should frighten every American,” said Po Murray, chairwoman of the Newtown Action Alliance. “We will continue to remind Congress and Donald Trump that if it can happen in Sandy Hook then it can happen anywhere to anyone no matter their political affiliation.”

4 thoughts on “CT mayors press McConnell to put the U.S. Senate to work on gun bills”