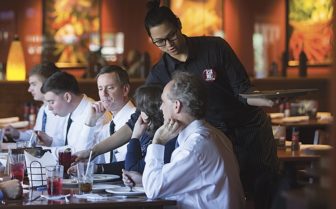 A Bertucci’s restaurant in Massachusetts.

Gov. Ned Lamont and legislative leaders are closing in this week on compromise wage rules crucial to both Connecticut’s restaurant industry and its workers.

And while the governor and legislative leaders were cautiously optimistic they could reach an agreement, they hinted the middle ground could rest on which penalties restaurants could — and could not — face for past violations of state labor laws.

“We’re trying to reach an agreement where we take care of workers who allege they were underpaid and at the same time we reduce the threat of … heavy penalties [on ] restaurants that maybe felt like they were misunderstanding the law,” Lamont told the CT Mirror on Wednesday.

At issue is the minimum wage employers must pay workers who generally work for tips — but who also spend a portion of their job doing non-tip work. For example, a server may wait on tables, which generates tips, and refill ketchup bottles and salt shakers, which does not.

The Connecticut Restaurant Association says that, for years, the state Labor Department has instructed businesses to follow the “80-20 rule,” which says that as long as a worker spends at least 80 percent of his or her time on tasks that generate tips, the restaurant can pay a reduced wage for all the work.

Over the past year about a dozen Connecticut restaurant owners — who collectively employ roughly one thousand workers — have been sued by workers who argue they are violating the law.

But labor groups say some restaurants routinely abuse the 80-20 guideline and that lawsuits about this issue are nothing new, having been filed routinely for the past two decades.

Lamont vetoed a bill adopted in the waning days of the regular legislative session that would have instructed the Labor Department to write the 80-20 rule into regulation. But it also would have made the change retroactive — effectively undermining pending lawsuits.

The governor didn’t disclose specific details Wednesday of his administration’s negotiations with legislative leaders. But Lamont made it clear he wasn’t interested in retroactive changes that would attempt to weaken workers’ rights to fair compensation.

“One of the great exceptions I took was trying to take a law and apply it retroactively,” Lamont said. “That’s not the way you do justice.”

But the governor did not comment on another potential retroactive change: penalties for restaurants.

Current law allows a judge to award double the wages owed to aggrieved employees, and to order businesses that violated the law to cover the workers’ legal fees.

Sources close to the negotiations said retroactive changes in this area were under discussion. 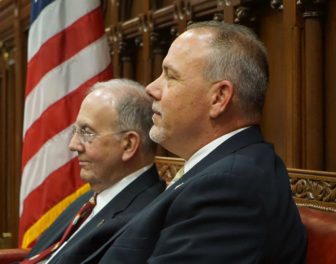 Senate President Pro Tem Martin M. Looney said any retroactive change “that would undermine or frustrate completely a pending lawsuit” likely would  be struck down in court.

But Looney also hinted legislators and the governor would find a solution that protected workers’ rights and offer “some relief to restaurant owners who have acted in good faith. We’re talking about threading a very fine needle here.”

House Speaker Joe Aresimowicz, D-Berlin, earlier this summer favored an override of Lamont’s veto, but later agreed to try to negotiate a compromise.

“At this point I think it’s incumbent on us all to come to middle ground, to help restaurants but also protect the workers from egregious acts by their employers,” he said.

Both legislative leaders and Lamont have said they hope to have the issue resolved and ready for lawmakers to adopt in special session later this summer.

Scott Dolch, executive director of the Connecticut Restaurant Association, told the CT Mirror recently that it’s crucial for Lamont and legislators to resolve the issue soon.

“There’s the potential for more lawsuits to be filed, and for more restaurants to face legal fees,” Dolch said, adding that the food service industry is a key part of Connecticut’s economy, employing more than 160,000 people. “At the end of the day we want to get this done as quickly as we can, but at the same time we want to get this done right.”

Rick Melita, director of the Connecticut State Council of the Service Employees International Union, agreed that progress toward a compromise has been made.

Another key step, Melita said, is for all sides to agree that businesses must be required to maintain clear records of how many hours employees are assigned to tip and non-tip work.

“Otherwise there is a tremendous potential for wage theft and fraud,” he said.

The U.S. Department of Labor found more than 80 percent of full-service restaurants it investigated nationally between 2010 and 2012 had violated labor standards, including wage and tip violations, Melita noted.

Melita also rejected an argument raised by Aresimowicz that since most restaurant workers are not unionized, labor groups don’t have a major role to play in resolving this issue.

“Joe’s an old friend but I would respectfully disagree with his assessment,” Melita said.