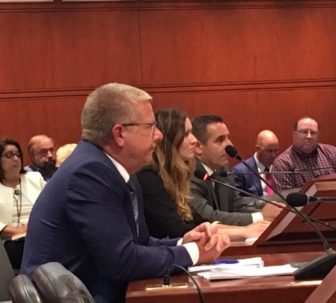 From left, John Rasimas, Tatsiana Sidarau and Vincent Filippa of the state auditors.

Mismanagement at the Connecticut Port Authority has damaged the reputations of key players and undermined legislative confidence in the young quasi-public agency at a key juncture, but state auditors testified at a public hearing Tuesday the financial costs to the state appear to be limited.

The legislature’s Transportation Committee conducted an all-day hearing into the operations of an agency in disarray: Its executive director, Evan Mathews, is on leave, and two recent board chairs, Scott Bates and Bonnie Reemsnyder, have resigned in quick succession following a scathing audit and press accounts of questionable contracting and hiring practices.

Republican leaders called Tuesday for Bates, whose position as chairman of the authority board was part-time and unpaid, to at least temporarily step down from his full-time appointive post as the deputy secretary of the state.

Lawmakers have questioned the circumstances surrounding the $3,000 purchase of sound-insulating panels decorated with photographs by Reemsnyder’s daughter for the authority’s new offices in Old Saybrook, while auditors found that the authority had operated in its first two years without the most basic of financial controls or personnel rules.

“I cannot think of another quasi [public agency] that would be in this position,” said John Rasimas, the deputy state auditor.

But Tatsiana Sidarau, who led the audit, said the evidence so far indicates a modest loss to the state, and the new acting chair of the authority’s board, David Kooris, said in an interview that reviews of the authority’s practices have yet to find examples of significant fraud or misspending.

“We’re very early in our analysis, but it’s a lot of little things,” Kooris said “It’s not one big thing, at least that we found so far.”

The agency is small with annual budgets of about $1.5 million, financed by a $400,000 appropriation by the General Assembly and fees from other sources. But it has borrowing authority, and the agency has been planning a $93 million investment at the State Pier in New London in preparation for an offshore wind generation project planned by Ørsted North America and Eversource.

Rep. Laura Devlin of Fairfield, the ranking House Republican on Transportation, said after the hearing she was gratified to hear about the financial controls being imposed in response to the audit, as well as directives from Gov. Ned Lamont for the Office of Policy and Management to take a stronger oversight role.

“Perhaps we can get on a new track,” she said.

But Devlin and others said the mismanagement of relatively small matters raises questions about the capacity of the authority to manage the development of the State Pier. After the hearing, she said a memo submitted by a board member, Donald B. Frost, was troubling.

Frost wrote that only two of the 15 board members have any background in “transportation, marketing, commodities or raw materials, manufacturing or distribution.” Frost and David E. Pohorylo, a shipping company president on the board, said Bates shared little information with other board members, especially concerning the offshore wind deal.

Pohorylo said after the hearing that he hopes the legislature presses Bates to explain.

“We should not allow the guilty parties to get away,” he said. 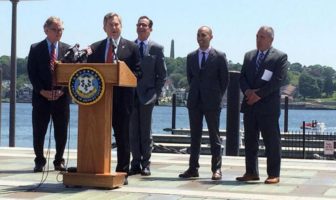 Former chair of the Connecticut Port Authority Scott Bates addressing an event at the New London state pier in 2018. Directly behind him is former Gov. Dannel P. Malloy.

Merrill’s spokeswoman responded without referring to Bates by name.

“It is regrettable that the House and Senate minority leaders have taken this opportunity to play politics, and insinuate that the public ought to have anything but the utmost confidence in Connecticut’s elections administration,” Stephanie Sponzo, the press secretary for Merrill, said in an emailed statement. “This office remains dedicated to bolstering our state’s elections security, and the secretary has every confidence in her agency’s ability to carry out that important mission.”

Asked by email if that confidence extended to Bates, Sponzo did not reply.

Neither Bates, Reemsnyder or Mathews testified Tuesday, and Bates could not be reached for comment about the demands by Republicans for him to step away from all state service.

Republicans questioned the value of the hearing without the presence of those key players, and they noted that Mathews was suspended without any public explanation.

“I think the public deserves to know what has happened,” said Rep. Devin Carney, R-Old Saybrook, a committee member.

“The taxpayers have a right to know what they are paying for,” Klarides said.

Republicans had urged the Democratic leaders of the committee to subpoena Bates, Mathews and Reemsnyder.

“We may consider doing that in the future,” said Rep. Roland J. Lemar, D-New Haven, the committee’s co-chair.

Reemsnyder said in written testimony that her duties as the first selectwoman of Old Lyme kept her from the hearing, but she denied playing any role in the authority’s purchase of photos from her daughter in 2017. An interior designer hired by Mathews made the contact.

“I learned about these initial discussions only after they had had occurred. When I did become aware, I immediately informed Mr. Mathews that I could have no involvement with any aspect of the transaction and told my daughter the same,” Reemsnyder said.

No ethics laws or authority bylaws limit the port authority from doing business with a relative of a board member, she said.

“They do, however, in most cases require that the boad member recuse himself or herself from decisions regarding the transaction,”she said. “I followed those rules, recused myself, and took no part in any discussion or decisions concerning the CPA’s purchase from my daughter. In hindsight, I wish I had thought to to alert the full Board, and not just Executive Director Mathews, to the situation and my recusal.”

But she wrote she later learned that Bates, who then was chair, and the rest of the board members were aware of the transaction and her recusal.

Reemsnyder resigned last month at Lamont’s request. Kooris, a deputy commissioner at the Department of Economic and Community Development, was named acting chair and has been assessing the day-to-day operations of the authority.

Paul Mounds, the governor’s chief operating officer and deputy chief of staff, told the Transportation Committee that the governor has ordered an examination of all the state’s quasi-public agencies.

Correction: The port authority sometimes meets in New London, but its offices are in Old Saybrook. As originally posted, the story incorrectly named New London as its headquarters.